The Other Work We Do: Housework

Housework. Whether you love it or hate it, most of us have to do at least some of it.

How we split it up the chores at home is the subject matter of millions of minor (and major) family feuds. Usually, in the end, we fall into some sort of pattern at home whereby tasks are shared whether it is consciously negotiated or not. Typically, it is still the woman who ends up doing more of the housework. The last time the federal government measured this, the Bureau of Labor Statistics found that 84% of women did some housework in 2014 (compared to 65% of men). Those percentages have barely budged from the government’s previous study from over a decade earlier.

According to Slate, globally women spend an average of 4.5 hours a day on unpaid housework, and women in the U.S. spend around 4 hours on chores compared with around 2.5 hours for me. As Slate puts it,: “Work schedules and habits are considered — sometimes consciously, sometimes not — and a pattern of domestic work emerges. We may not always like the outcome, but many of us slog through them with the belief that we mainly have ourselves and our partners to blame.”

The amount of housework one does, however, turns out to depend on a couple other factors that may not be very obvious. How much time you spend doing the dishes, laundry, and taking out the trash seems to depend very much on where you live. A recent study published by sociologists Leah Ruppanner and David Maume suggests that the division of housework is heavily related to two things related to where you live: (1) how many women are in the labor force in your state, and (2) how culturally progressive your environment is (as measured by a number of data points ranging from the political composition of elected officials to the marriage rate and percentage of population that attend church). 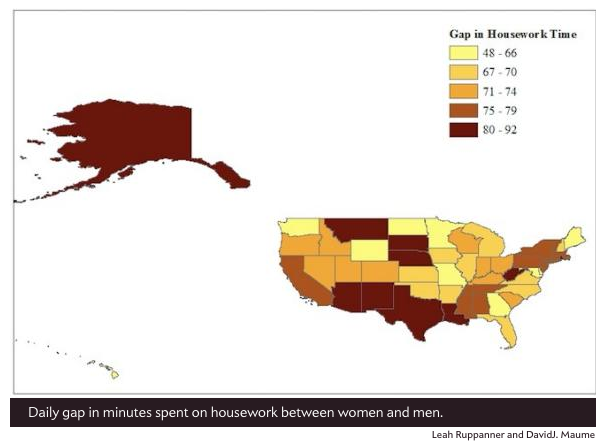 At first blush, this isn’t really so surprising. After all, we all have a sense we are influenced by social norms and shaped by the expectations around us. What is surprising is that where a woman lives and the attending norms in her location seem to be more powerful than her individual circumstances and work schedule.

As Ruppanner, one of the study’s authors says, “In this paper, we show that women can’t just up-skill their way out of housework (get more college education, enter the labor market, etc). Rather the cultures and structures around them — access to the labor force, equal pay, having more women represent them in government — are really important….So, if you are going to have a baby, move to Maryland :).”

We found ourselves wondering whether women who worked in more progressive employer cultures also benefitted from this “environment” effect. While women don’t do household chores at work, there are analogies in terms of drudgery assignments in the workplace. Conversely, this would mean that those who worked at employers with more traditional values (whether in the form of an explicit company culture or the culture of senior managers) may be at a disadvantage. These questions were beyond the scope of this research, but it is an interesting analogy to thinking about a company’s cultural impact on gender equality at work.

Do you have ideas or opinions about how to more equitably share the work you do at home? Join the conversation in our community and share your perspective with other women in the workplace!

0 Comments
Browse recent articles
Working Remotely Is Hard Enough Without Adding a Bad Boss Into the Mix — Here Are 8 Ways to Deal
What Are Women Executives Looking for in Their Workplace?
The Importance of Feedback, Curiosity, and Confidence — Advice From an Engineering Manager
Challenging Myself While Nurturing My Network: How to Make a Successful Career Pivot
How I Rewrote My Career Trajectory After a 'Demoralizing' Demotion — And How You Can, Too
Soft Skills: What They Are and How to Make the Most of Them In Your Job Search
See more
Achieve your career goals.
Be part of the largest online career community for women to find jobs, advice, and support — for free.