Women In Tech: How Their Experiences Differ From Other Women In The Workforce

Last week, the world got a glimpse into what life is like for women who are receptionists in the U.K. and female airline pilots in America. These are two professions we don't hear about very much when we talk about what it’s like to be a woman in the workplace. In general, for the past couple of years, a good portion of the attention about the female experience at work seems to be focused on women in technology.

To be sure, women in technology face a well-documented set of important challenges. The problems with representation in technology starts early. As GirlsWhoCode’s website highlights: "While 57% of bachelor’s degrees are earned by women, just 12% of computer science degrees are awarded to women." Then, these women enter the workforce, but see a very high attrition rate. According to one study, 56% of technical women leave their roles in mid-career compared (10-20 years in).

The good news is that the tide of public opinion appears to be affecting institutional responses by employers. Technical women are also much less likely to take offenses in the workplace without putting up a good fight. Social media campaigns like #ILookLikeAnEngineer and high profile lawsuits like the Ellen Pao v. Kleiner Perkins trial last year illustrate the way that women in technology have harnessed technology and the media to highlight important problems and amplify their voices.

But are the issues women in tech face really different (and worse) than the ones women face in across the larger workforce? Is the focus on women in technology just an extension of the way that the high-growth industry has captured the public imagination, or are there particularly negative experiences in the tech industry that truly set that industry apart?

This is what I recently discussed with representatives of the National Center for Women &  Information Technology (“NCWIT”). Founded in 2004, NCWIT is a national non-profit organization based in Boulder, Colorado working to increase women’s participation in computing and technology. This week, NCWIT is holding their annual summit in Red Rock Canyon, Nevada and convening a group of people to discuss the state of women in technology. Although Fairygodboss couldn’t attend this year, we did give NCWIT organizers data that we thought might further their research and understanding of women in computing.

NCWIT were specifically interested in the job experiences of women with certain technical job titles such as “systems engineer,” "website developer," “software developer,” “systems administrator” and other technical positions. We then looked at a sample of Fairygodboss job reviews associated with these technical job titles in order to see what similarities and differences existed among them and the women in our overall community.

The first thing we noticed was that technical women and the overall community of women on our site both shared pretty similar distributions of job satisfaction: 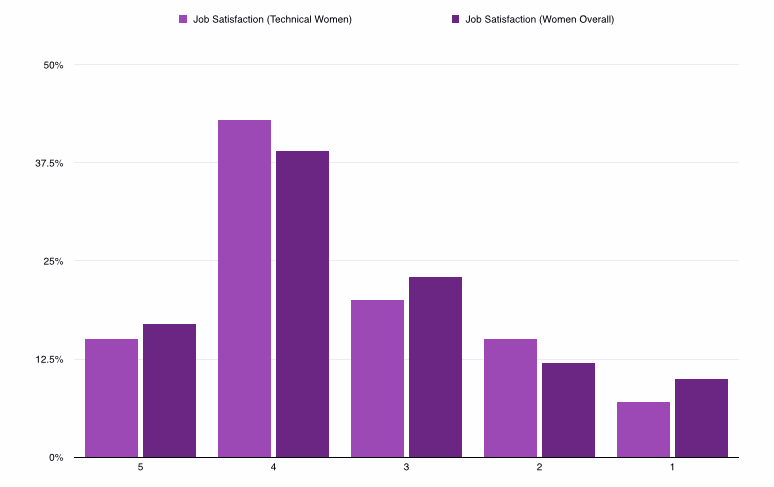 We also noticed that technical women were likely to recommend their employer to other women in similar ratios as other women, overall. 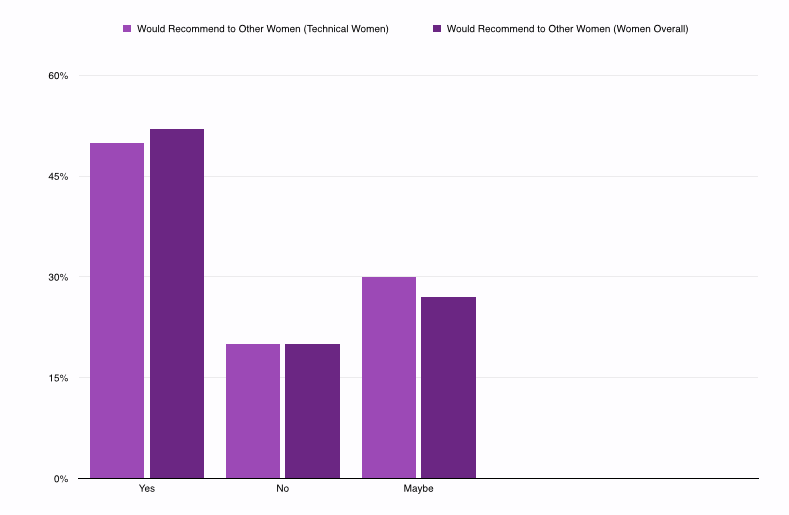 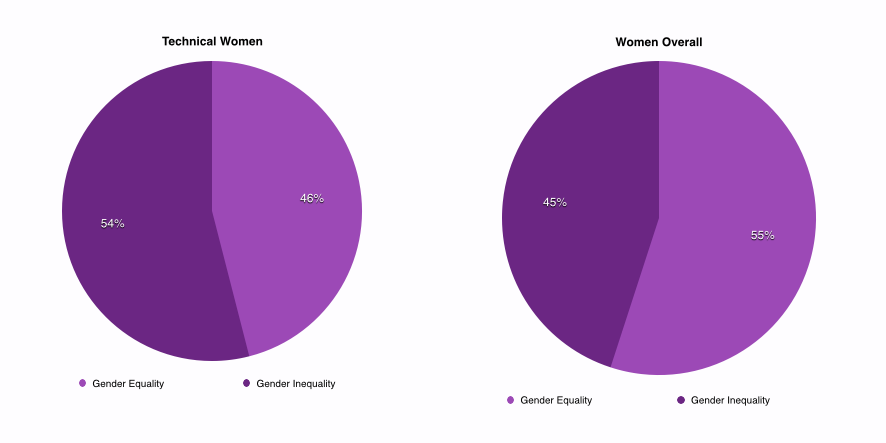 Incidentally, we also looked at women working in the technology sector, overall -- regardless of whether they had technical titles. These women work in a wide range of positions in departments ranging from marketing, sales, PR, HR, finance, technology, and IT to operating roles. What we found -- perhaps unsurprisingly -- is that in comparing technical women to women working in technology, the technical women perceived more gender inequality than women in the tech sector, as a whole. However on measures such as job satisfaction and likelihood to recommend their employer to other women, they reported similar experiences. 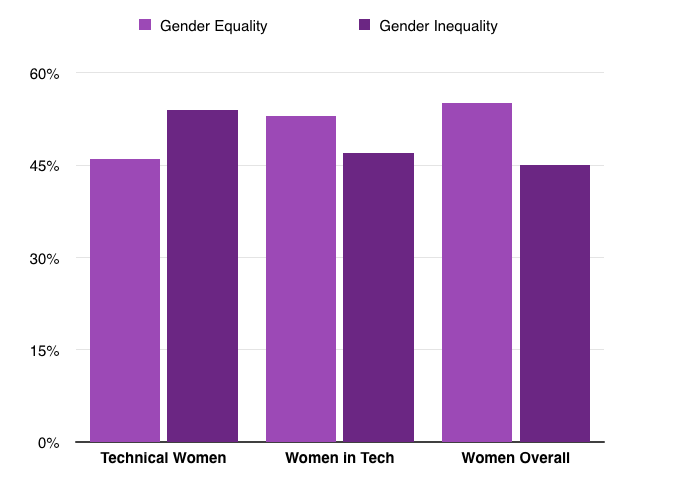 The other difference we found between technical women and women in the workforce, overall is that the technical women were more likely to say that their jobs offered “good flexibility” compared to the population of women in our overall community. 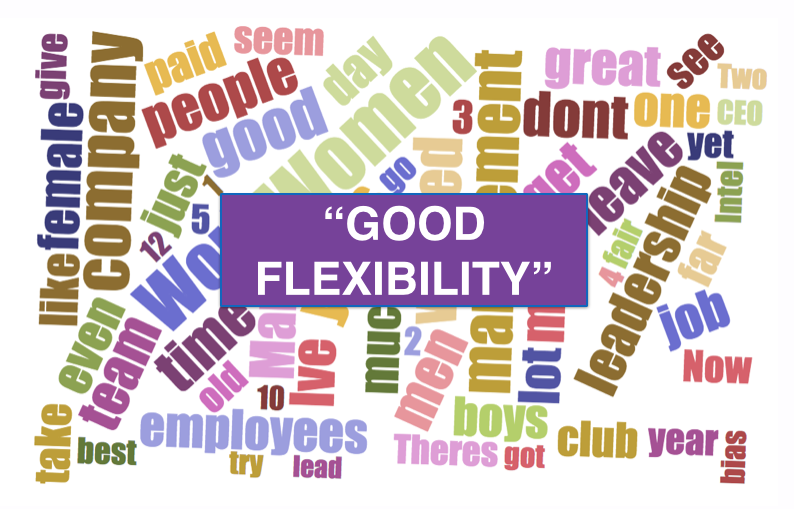 So what accounts for the fact that technical women perceive gender inequality in their workplace than the overall population? NCWIT cites a variety of workplace experiences that make life for technical women more difficult: dissatisfaction with career prospects, unconscious bias, and isolation in the workplace are among them.

The fact that technical women's job satisfaction ratings were so similar to the overall population indicates that these gender equality issues are not necessarily trumping other factors that contribute to job satisfaction (such as compensation, or a pleasant culture, as just two simple examples). In fact, the data suggests that perhaps one of the things that counter-balances the negative experiences of gender inequality may be access to flexibility at work.

To be sure, correlation does not prove causation and comparing two groups' experiences may be an exercise that compares apples to oranges. However, the attention employers and companies are now paying to recruit technical women is a testament to the power of attention that women in technology have shed on the issues they face. While Fairygodboss' data confirms that technical women certainly face many challenges at work, hopefully it also makes clear that women in other industries and roles face similar issues in the workplace deserving of attention.

A version of this article originally appeared on Forbes.

Personalize your jobs
Get recommendations for recent and relevant jobs.
Employer Reviews
UKG
4.7
The company is taking strides, daily, to be an employer of...
XPO Logistics
3.8
So many wonderful women in leadership roles and all are...
Recent Content
How to Manage Ageism in a Job Search
I'm a Career Strategist — Here's 5 Subtle Signs it's Time to Consider Changing Careers
Do These 3 Things Before You Start a New Job to Set Yourself Up for Success