Getting through the coronavirus crisis has tested the metal of a lot of couples. Quarantining may be behind the demise of some relationships, but for others, bunkering down together in the face of an increasingly uncertain world has only made them closer. And not just, y’know, literally, physically closer — a joke that admittedly doesn’t apply to the celebrities on this list.

As they livestream the trials and tribulations they’re up against whilst quarantining poolside at 12-bedroom palaces, celebrities have given us plenty to roll our eyes at during the course of this pandemic. But the rare few have also demonstrated examples of daily habits and routines that are helping them navigate the crisis successfully as a couple.

Here are 11 ways strong couples — who also happen to be famous and thus afforded a tremendous degree of privilege, but I digress — are protecting their partnership in troublesome times.

1. They’re finding ways to give back (and starting new projects together).

Ashton Kutcher and Mila Kunis decided to use their newfound free time together to launch a charitable wine, called "Quarantine Wine." All proceeds go toward charities that are providing crucial aid during the pandemic, the couple shared on Instagram. 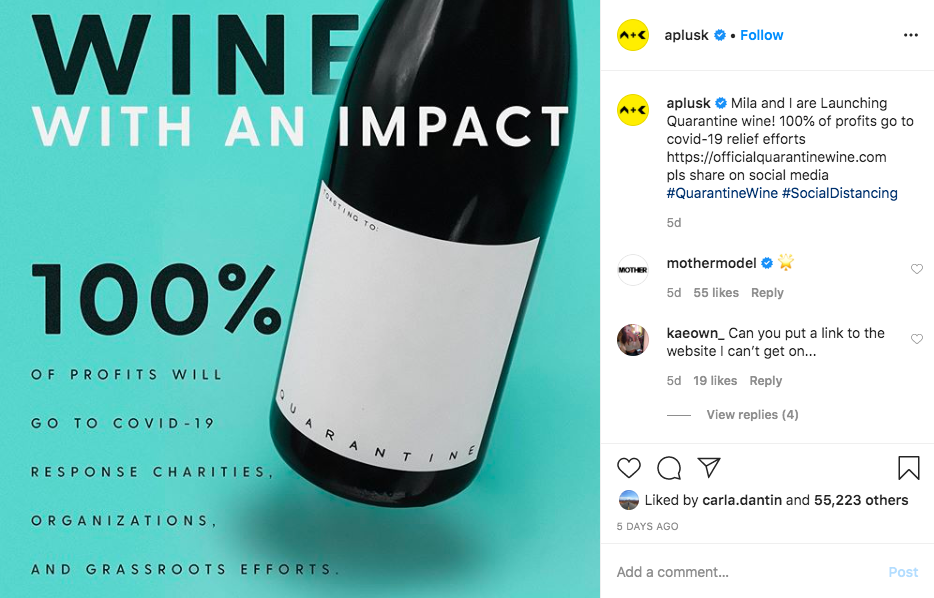 Launching your own charitable brand of vino probably isn't within the realm of possibility for most couples, but there are still plenty of ways you can work together to help those in your community.

Fans of Chrissy Teigen and John Legend will find it as little surprise that the couple seems to be spending a lot of their quarantine time in the kitchen. (Although things got pretty dire when they nearly ran out of romaine lettuce... #shudder). Taking a crack at a new recipe (or several) together is a perfect way to kill some sheltered-in-place hours. You can even make a competition out of it, like Julianne Hough and her former-NHL husband Brooks Laich who challenged each other to a bake off.

3. They're giving each other haircuts. 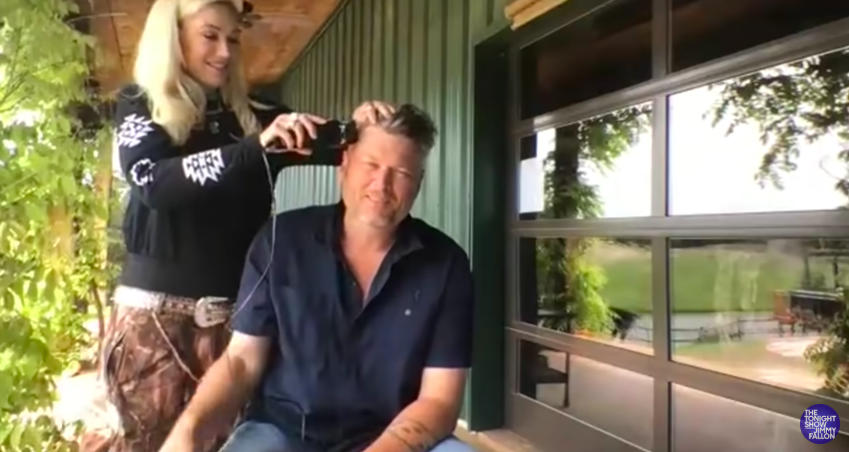 Source: The Tonight Show // YouTube Hey, someone's gotta do it. On a recent episode of "The Tonight Show," Gwen Stefani offered an illustrative example by giving boyfriend Blake Shelton a mullet. 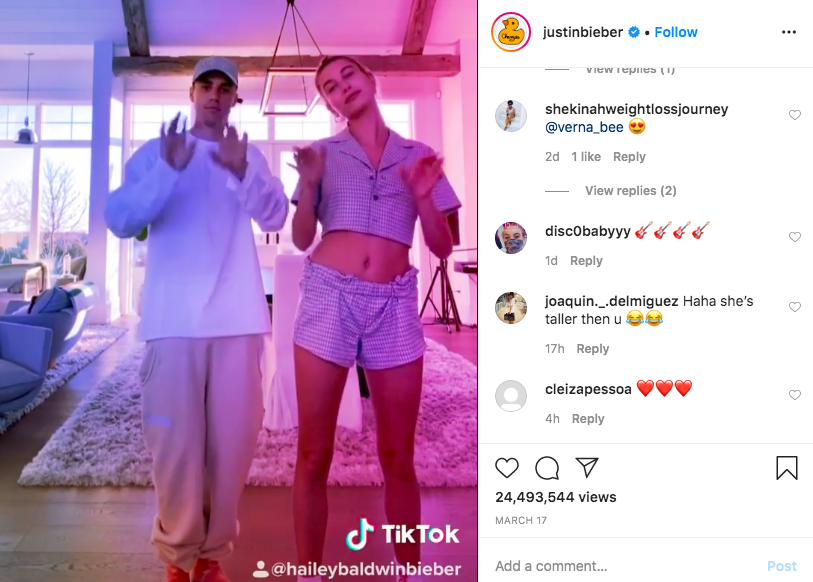 Justin and Hailey Bieber seem to spending most of their time at home on TikTok, uploading choreographed dance routines.

5. They're picking up new at-home hobbies and making things. 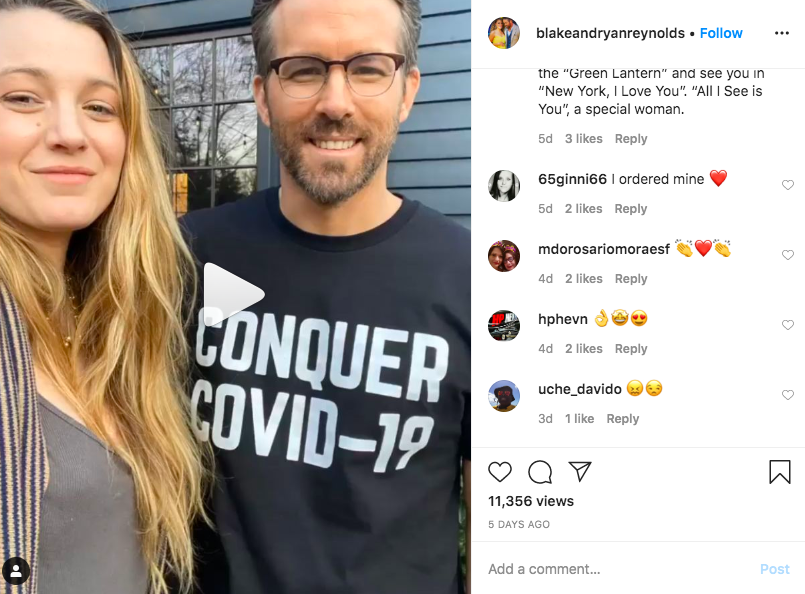 Ryan Reynolds, who shared that he and wife Blake Lively have been devoting time to home-schooling their three daughters, shared that they've also been getting crafty as a fam.

"We're lucky enough to have a little, tiny garden, so we're learning a little bit about gardening. We're trying to make this an educational experience. But I'm mostly drinking... This morning, we made dresses out of tissue paper, which was fun for them," Reynolds shared on a The Late Show virtual appearance. 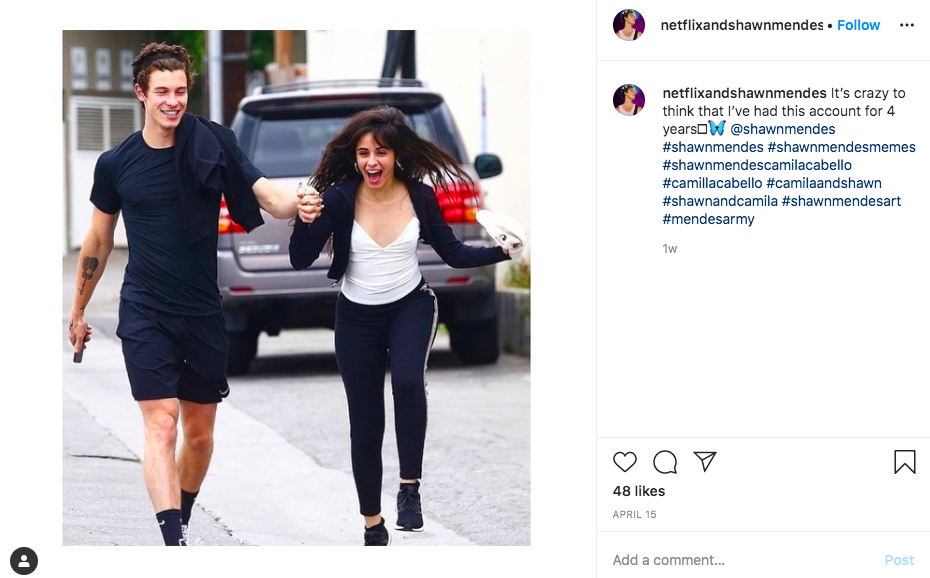 While quarantining with her family in Miami, Camilla Cabello and Shawn Mendes have been spotted near their home (at presumably socially safe distances from other people) running. Or at least, they've been seen out wearing clothes that give one the idea they're intending to run, jog or at least walk at a brisk pace at some point. As a lot of us have learned, finding ways to keep moving during quarantine is key.

7. They're having game nights, or game days, or however we prefer to blocks of hours now. 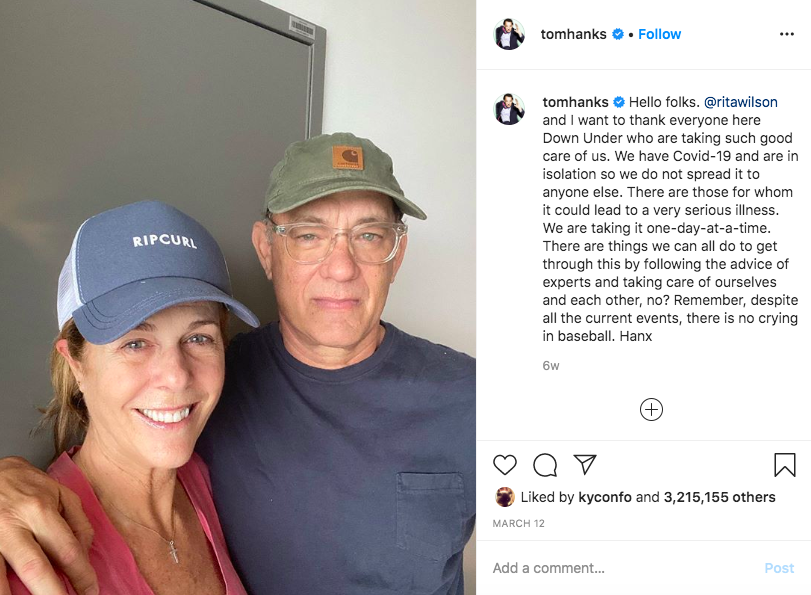 After announcing that he and his wife Rita had been diagnosed with coronavirus in Australia, Tom Hanks later updated fans on their healing process, sharing that they were wiling away the hours by playing cards. Rita, he said, had "won  six straight hands of gin rummy and leads by 201 points.” (Both have since made full recoveries.) Following their example, now's the perfect time to teach each other how to play chess or poker. Or break out Settlers of Catan, a game that's sure to (mercifully) take hours with only two players. 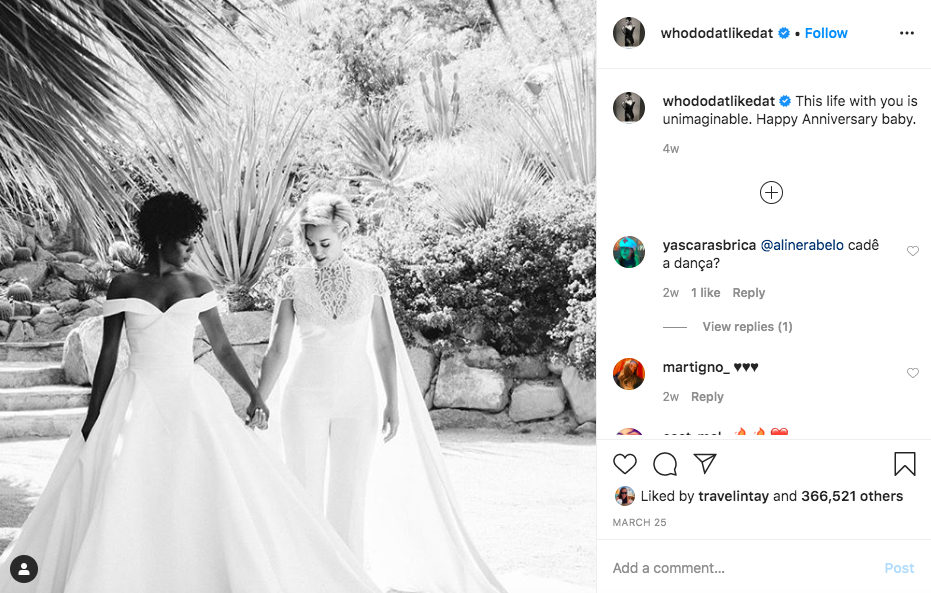 Times may be harrowing. But that means carving out space to recognize and celebrate important moments in your relationship may be all the more important. Like actress Samira Wiley and her screenwriter wife Lauren Morelli, who met on the set of "Orange is the New Black," make a point of preserving special dates and milestones. Dress up. Have wine delivered (and tip your delivery person substantially). Make a thing of it. 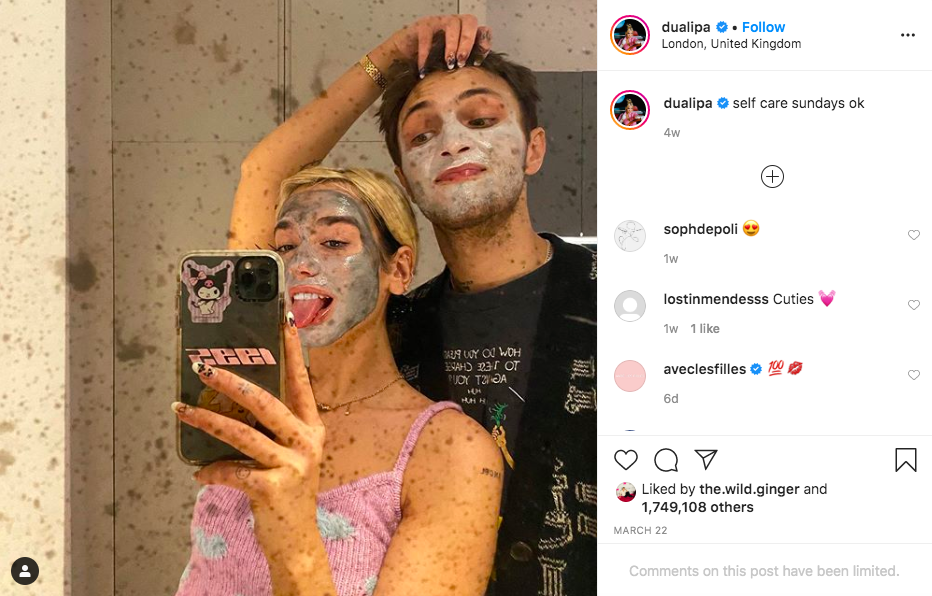 Dua Lipa, who's quarantining with boyfriend Anwar Hadid, says the couple has turned their apartment into a makeshift salon. She shared that they've also been good at "doing our own thing, then coming together when we want to watch a movie, or play a game, or do some painting, or go on our one daily walk.”

10. They aren't pretending they won't argue. (While... also perfecting their skin care.) 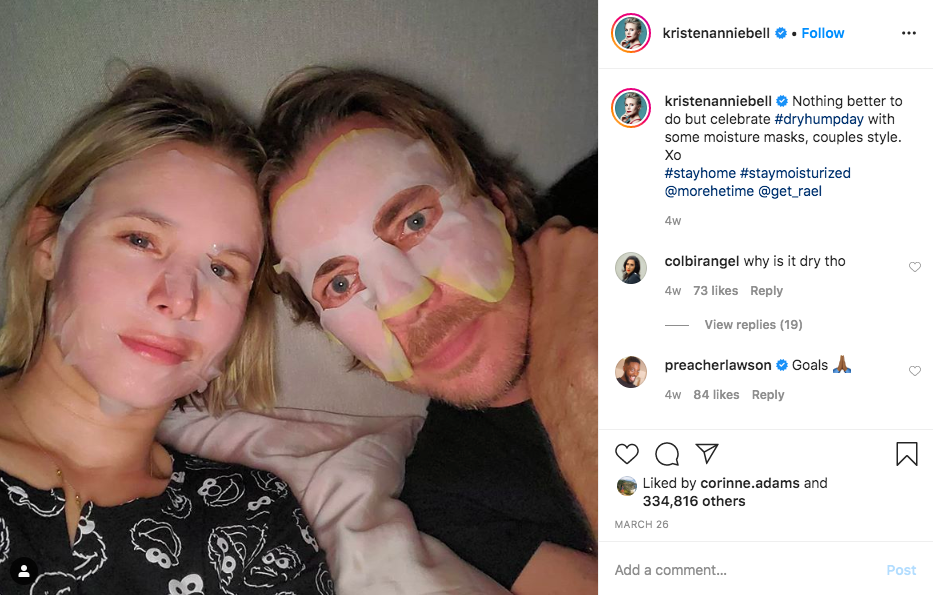 Though they've also been having some fun on masked-up walks, Kristen Bell and Dax Shephard aren't making any pretenses about the fact that things will sometimes get tense. And given the extreme circumstances we're in, that's totally understandable.

"We've gotten on each other’s last nerve these last couple days," Bell told ET Online. "We’re doing much better now because were laughing about it. But when we were not laughing about it for the first couple of days, that's the hard spot."

"I was making everybody miserable," she said. "The kids hated that I was trying to adhere to the schedule. So about a week ago, I woke them up and I said, 'This is your most important mission ever. Get up.' I brought them in the kitchen and I had them rip up the schedule... If you make a plan and it's not working, you pivot."

11. They're finding things to laugh about. 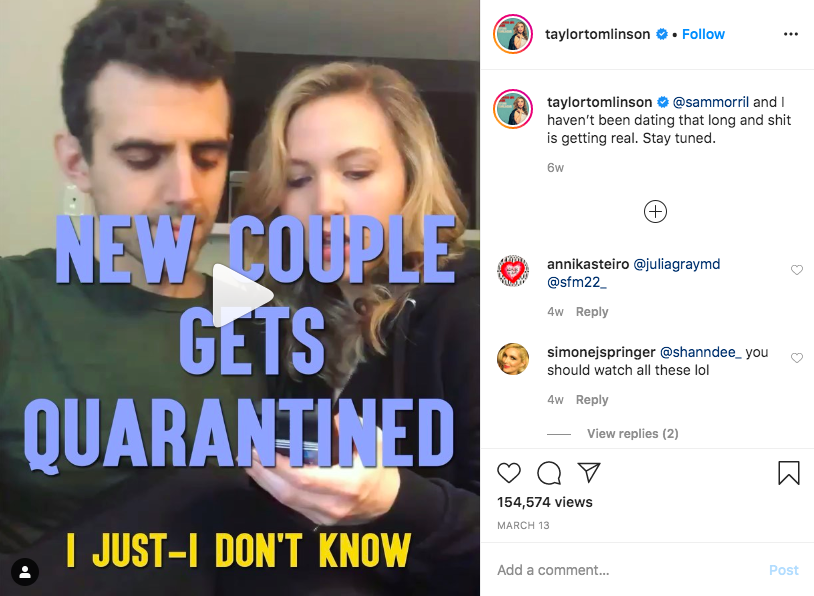 Perhaps most importantly, they're finding ways to work in some much needed comic relief. For comedian couple Sam Morril and Taylor Tomlinson, who only recently started dating and are now quarantining together, they're sharing that relief with the public, too.

0 Comments
Browse recent articles
4 Subtle Habits That Influence Team Morale — And How Best to Implement Them
‘We Have to Humanize the Workplace:’ 3 Traits This Director Says You Need to Excel in Engineering
Expert Advice for Growing an Empowering Career at a Great Company — From a VP of Talent Development
8 Green Ideas to Make Your Office More Eco-Friendly and Effective
The Dirty Dozen: The Worst Things You Can Put On a Resume In 2022
Don’t Be Afraid to Live, Dream and Pivot Your Career, According to a Senior People Business Partner
See more
Achieve your career goals.
Be part of the largest online career community for women to find jobs, advice, and support — for free.