3 Reasons Why We Need To Keep Talking About Equal Pay

Equal Pay Day is a symbolic day where we raise awareness of the gender pay gap by marking how far into the year women must work in order to earn what men earned in the previous year. While the gap has decreased in recent years, here's why we need to keep talking about it.

March 15 marks 2022’s Equal Pay Day: the symbolic day where we raise awareness of the gender pay gap by marking how far into the year women must work in order to earn what men earned in the previous year.

While the gender pay gap has decreased over recent years — just a few years ago, Equal Pay Day was in April —  the rate of change has slowed. We saw large strides in the narrowing of the pay gap from 1960 - 2000, largely due to women’s increase in education and participation in the workforce, but the rate of change has significantly slowed this century — especially since the start of the COVID-19 pandemic.

Equal Pay Day is not only an acknowledgment of the pervasive gender pay gap but also an opportunity for us to discuss these issues openly, reflect on our own compensation and advocate for ourselves at work.

Why We Need to Talk About Equal Pay Day This Year

We ALL need to know that it’s okay to ask for more.

Men initiate salary negotiations about four times as often as women. Additionally, women are more apprehensive about negotiating their salary and ask for less when they do.

Critics will say that the simple solution to the wage gap is to have women negotiate. Unfortunately, women are stuck in a precarious situation. Ask for more and studies show you risk being seen as ungrateful or pushy. Don’t ask and you could miss out on over $1 million in earning over your lifetime.

Fortunately, there has been great research done to help women understand how to negotiate without facing the social cost of negotiating. But for equal pay to really be within our grasp, the people who we are negotiating with need to also be aware of their unconscious bias against women negotiating and acknowledge that it’s okay for women to ask for more.

Because any gap is a big gap.

Some gender pay gap naysayers like to point to the nuances in the widely cited statistic that women make 83 cents for every dollar men are paid. When controlling for education, race, and profession, there are some instances where the gender pay gap can decrease to 5%. While 5% is certainly much better than 17%, the impact on earnings over a lifetime is startling. A 5% wage gap can mean that women are losing out on hundreds of thousands of dollars over their career.

Stanford Professor Margaret Neale gives an example of the impact this can have on earning power: two people receive a job offer of $100K and one person is able to negotiate that offer up to $107K, which may not seem like a big difference at the time. But if those two people are given the same raises and promotions over a 35-year career, the person who didn’t negotiate will have to work for an additional eight years to be as wealthy as the person who negotiated an additional $7K at the beginning of their career.

Because it’s about more than just pay.

For things to be truly equal, more than just pay needs to be equal. To put women on a level earning playing field, women and men must share household and caregiving responsibilities equally. Working women are more likely to take time off, work reduced hours, or forgo a promotion to juggle home life and work life. According to research from the Bureau of Labor Statistics, working moms pick up more childcare and household duties than men — approximately an extra 75 minutes per day, when both spouses are working full time. The more we continue to talk about equal pay, the more we will understand what equal work, inside and outside of the workplace looks like.

While Women's Equal Pay Day is this March, there are multiple other Equal Pay Days that acknowledge that the wage gap is not the same for all women. The wage gap disproportionally affects women of color, LGBTQ+ women and working mothers. 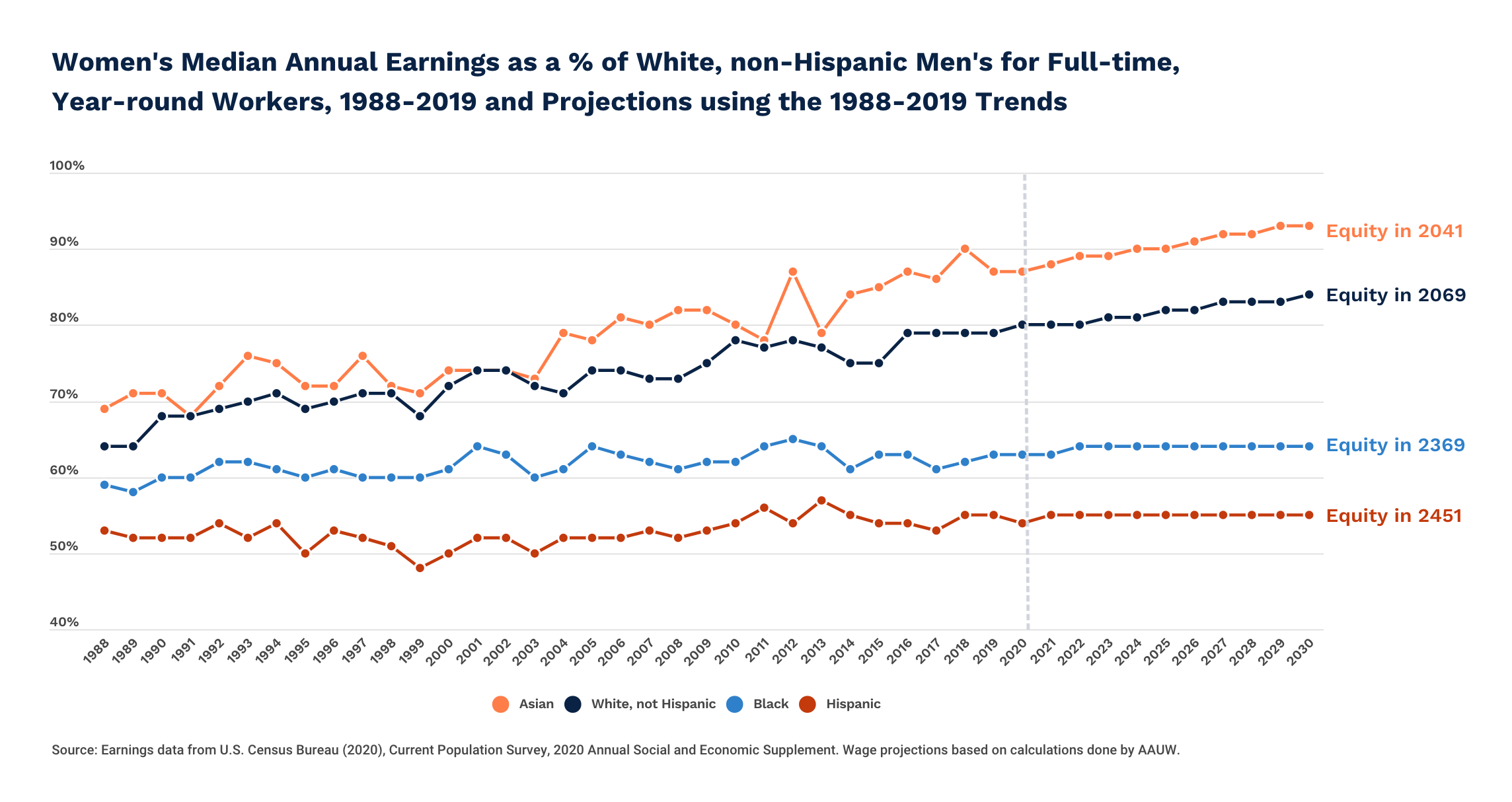 This year, these are the equal pay days that raise awareness for how long these women must work to make the same amount as a white, non-Hispanic man.

*This date is subject to change.

As women in the workforce, Equal Pay Day gives us the opportunity to raise awareness of the wage gap, reflect on our compensation situation and advocate for ourselves — because even though the gap is improving, any gap is a big one.

How are you raising awareness or advocating for yourself this Equal Pay Day? Share your answer in the comments to help other Fairygodboss members!

2 Comments
Browse recent articles
How to Best Respond to Situations of Ageism in the Workplace — According to an Executive Coach
The Importance of Personality Over Skill When Growing a Team — Lessons From a Director
‘I Love My Job’: At My Company, Opportunity Grows Every Day — From a Preschool Teacher
What If Climbing the Corporate Ladder Isn't the Answer?
I'm a Career Coach — Here are 10 Ways to Cope with Interview Nerves
I Pivoted From a High School Teacher to a Director of Innovation and Architecture: Here’s How!
See more
Achieve your career goals.
Be part of the largest online career community for women to find jobs, advice, and support — for free.