Ageism is one of the most blatant and rampant forms of employment discrimination today. Younger colleagues and managers sometimes dismiss older workers as useless, technologically ignorant, boring, or simply not healthy — often with no basis in reality or performance.

But like so many of the myths we tell ourselves, many of our attitudes toward older workers are simply incorrect. Check out these five ageism myths to see how they’re completely wrong.

Myth 1: Older workers don’t know how to use technology.

In the last few months, older social media personalities have gained traction on sites like Instagram, Twitter, and Tik Tok, and they’re called “Grandfluencers.” They demonstrate how to debunk pervasive ageism myths … while making some cash for themselves for their trouble.

Take Joan MacDonald. She’s 75, has 1.4 million followers on Instagram, paid partnerships with Women’s Best, a sportswear and dietary supplement company, and Sensate, a so-called stress-canceling device. As if that weren’t enough, she’s also got her own fitness app. 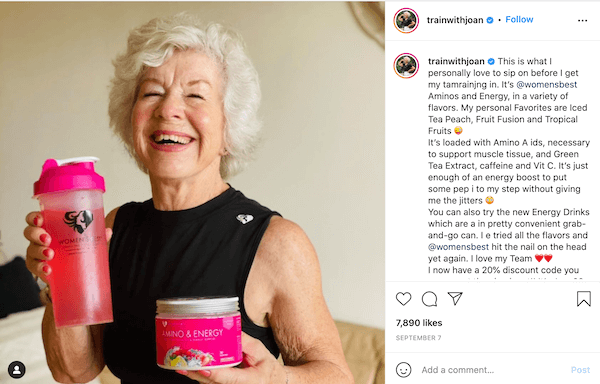 MacDonald has qualities that many consider rare in older Americans.

However, an increasing number of older people are becoming tech-savvy, social media literate, and active in the workforce.

“Elderly influencers have seen a significant rise in popularity on Instagram in the last year, with the top 10 seeing a 24% increase in followers since September 2017,” according to MediaKik.

MacDonald is one of many Grandfluencers making a living from internet sponsors and her own efforts to market her brand.

Then there’s Michelle Statham, the 58-year-old grandmother who grew a massive Tik Tok following of more than 300,000 after posting videos of herself taking down “Call of Duty” gamers from around the world.

And many know George Takei, who, at 84, has become a digital enterprise unto himself, years after he acted in the original “Star Trek” TV series and movies.

Of course, not every older internet savant is interested in fame and fortune.

Most people ages 50 and up use technology to stay connected to friends and family, according to a 2019 survey by AARP.

A recent Freshbook report found that 58% of workers ages 65 and older said they are fully up to speed and familiar with the core emerging technologies in their respective industries.

A Dropbox poll of more than 4,000 IT employees found that workers who were 55 and older use the same number of critical technologies and tools as their 18-to-34-year-old colleagues.

“They’re showing that anybody can do these things, that you don’t have to be afraid of aging,” AARP’s Bryant said.

Most 20-to-30-somethings don’t think about these issues at all.

Bryant believes some of the older influencers’ authenticity makes them a refreshing alternative to younger influencers.

“That’s part of the complexity of their narratives,” she said. “They’re bringing other parts of their lives to it. They’re grandparents and great-grandparents and spouses. They’re more comfortable in their own skins.”

Myth 2: Older workers are not interested in taking a junior-level position.

This particular myth has become more apparent in light of the massive job losses caused by the COVID-19 pandemic.

Economist Conor Sen said recent data he collected suggests that the number of people over 55 who participate in the workforce has decreased by 2 million over the last few years.

Sen believes this is due, in part, to how many older workers aren’t being considered for entry-level positions.

“A labor market recovery can’t be inclusive if it doesn’t include older workers,” Sen said. “A failure to draw them back in will mean reduced potential for the economy, and the possibility that inflation becomes a concern earlier than expected.”

Last year, an International Cogito Study found that not only are older workers eager to join the labor market, they also perform well at their jobs more consistently than younger workers, and they take fewer sick days, too.

If you’re an older worker looking to secure a junior-level position, remember that the “junior” you see in job descriptions may point to salary range more than work experience.

There are a couple of ways to work around this issue. An older job candidate could consider lowering their salary expectations and negotiate for other benefits, or, they could explain how having a longer resume than younger job candidates justifies a higher wage than the position offers.

Career advice site GetFive offers the following pitch on behalf of the older workers is represents, who value experience more than a high wage:

“If you hire me, you will get not only someone with years of experience but someone who can mentor some of the younger people,” it reads. “I hope you’ll choose to have someone with tremendous experience on your staff.”

This one is true to some extent, but not in the way it’s portrayed by the media or the way it’s understood by the general public.

According to data published in the journal Nature Human Behavior, executive inhibition (the ability to focus and use reason to make effective decisions) and orientation (the awareness of time, place, and oneself) actually get better with age.

A decline in these two functions is widely thought to go hand-in-hand with aging, but that common belief is simply wrong.

That said, many other cognitive functions do decline as we get older, but their health can be maintained into old age with proper diet, exercise and stimulating work.

A recent study published in the British medical journal BMJ found that people with mentally stimulating jobs have a much lower risk of developing cognitive illnesses later in life than those who do not.

Myth 4: Older workers have to stop being physically active.

Older people are often encouraged to do leisure activities when what they really need is to remain physically active to preserve their cognitive health.

“Studies show that you have a lot more to gain by being active — and a lot to lose by sitting too much,” the NIA said.

“Often, inactivity is more to blame than age when older people lose the ability to do things on their own.”

A study conducted by a team of researchers at Humboldt State University and published in the Journal of Aging and Physical Activity found that older adults who regularly participate in high-aerobic activities like bicycling were able to maintain their fitness and endurance as they age compared to those who were sedentary by comparison.

An independently conducted study published in the JBMR Plus Journal found that jump squats, running, and jumping jacks were the best aerobic exercises for keeping bones strong and healthy into old age.

While age-related bone loss is a common part of getting older, some of that bone loss is likely due to reduced levels of physical activity. Intensive, bone-loading exercises typically decrease with age,” said Tuuli Suominen, a doctoral researcher at the Gerontology Research Center at the Faculty of Sport and Health Sciences at the University of Jyväskylä  in Finland.

MacDonald, the 75-year-old fitness influencer who’s blowing up in popularity on Instagram, was overweight and suffering from high cholesterol, high blood pressure, and kidney trouble only four years ago.

Statham, the gaming Tik Tok grandma, was able to defy the common social expectations of people her age by finding a community of like-minded gamers around the world.

“I have a connection with so many of them,” she said. “We check on each other. I really didn’t know what to expect, but that, to me, that’s the best part of it. It’s just that community.”

This article originally appeared on Ladders.

10 Comments
Browse recent articles
Working Remotely Is Hard Enough Without Adding a Bad Boss Into the Mix — Here Are 8 Ways to Deal
What Are Women Executives Looking for in Their Workplace?
The Importance of Feedback, Curiosity, and Confidence — Advice From an Engineering Manager
Challenging Myself While Nurturing My Network: How to Make a Successful Career Pivot
How I Rewrote My Career Trajectory After a 'Demoralizing' Demotion — And How You Can, Too
Soft Skills: What They Are and How to Make the Most of Them In Your Job Search
See more
Achieve your career goals.
Be part of the largest online career community for women to find jobs, advice, and support — for free.