Mystery Woman
Tell us more for better jobs, advice
and connections
YOUR GROUPS
Discover and join groups with like-minded women who share your interests, profession, and lifestyle.
COMPANIES YOU FOLLOW
Get alerted when there are new employee reviews.
YOUR JOB ALERTS
Get notified when new jobs are posted.
NOT OK

7 Damaging Racial Microaggressions You May Be Guilty of Using at Work, According to a Psychologist

"Reminder that the 'micro' prefix in 'microaggression' isn't a measurement of the size of the slight. It means it happens at the 'micro' level, i.e. between individuals. This is in contrast to the 'macro' level, which refers to social structures and institutions."

That's the quote from Dr. Robert L. Reece, a sociologist at University of Texas — Austin, that Black and Brown-owned parenting and education group The Conscious Kid used to introduce their mini-lesson on microaggressions.

The lesson is adapted from Psychologist Derald Wing Sue's Microaggressions in Everyday Life: Race, Gender and Sexual Orientation which explains there are seven types of racial microaggressions, what he defined as "brief and commonplace daily verbal, behavioral and environmental indignities that communicate hostile, derogatory or negative slights and insults to marginalized individuals or groups."

According to best-selling author and professor Dr. Ibraham X. Kendi, one important part of antiracist work is understanding and shutting down racist ideas and actions that substantiate racist policy. That means learning about the microaggressions that are, unfortunately, still common in our workplaces then making sure we are correcting ourselves and others.

1. The "foreigner in own country" microaggression

This microaggression communicates that the speaker assumes a Person of Color is foreign-born — and that "born and bred" Americans only look one way. 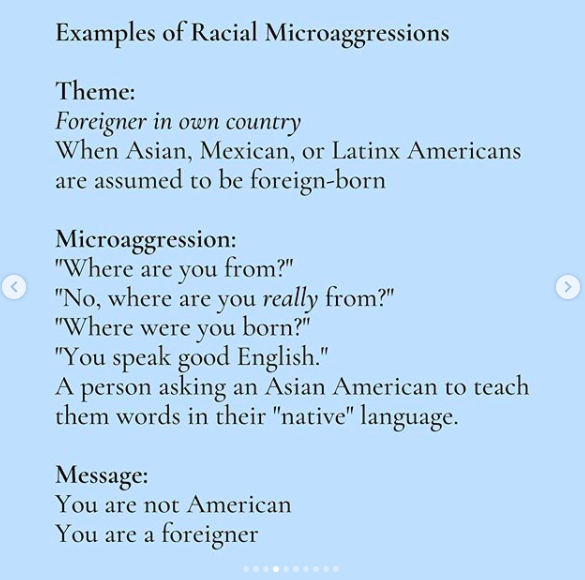 2. The "ascription of intelligence" microaggression

These types of microaggressions suggest someone's intelligence is dependent on their race and some races are more intelligent than others. 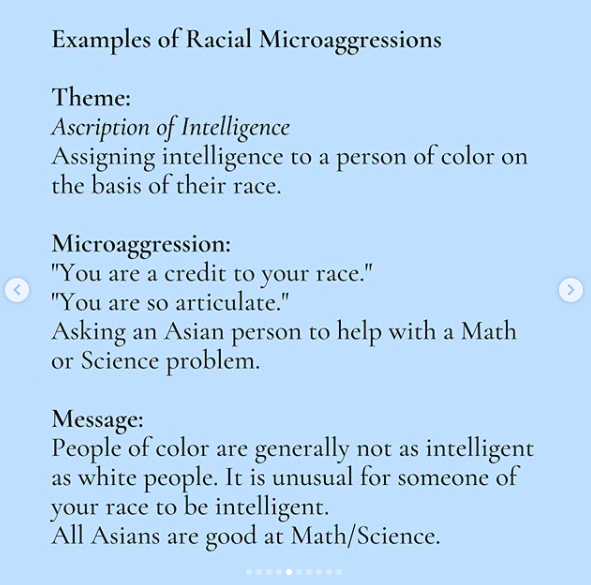 These messages indicate a white person doesn't want to acknowledge race, suggests People of Color should assimilate to dominate white culture and denies a Person of Color's experiences and ability to be a racial and cultural being. 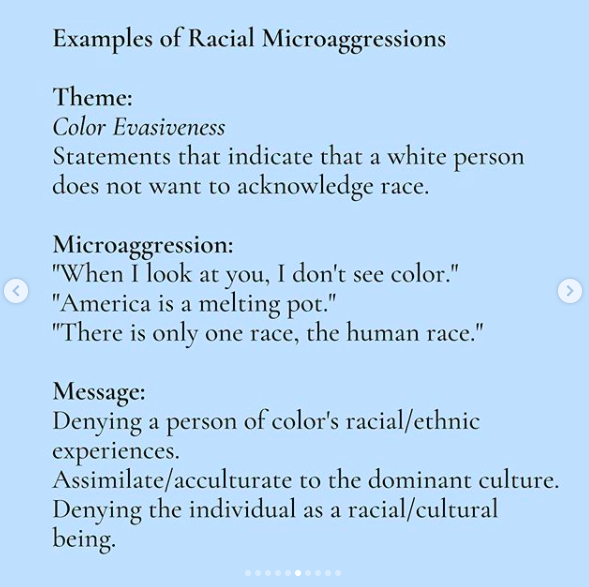 4. The "assumption of criminal status" microaggression

This message communicates that the speaker thinks a Person of Color is inherently dangerous or deviant because of their race. 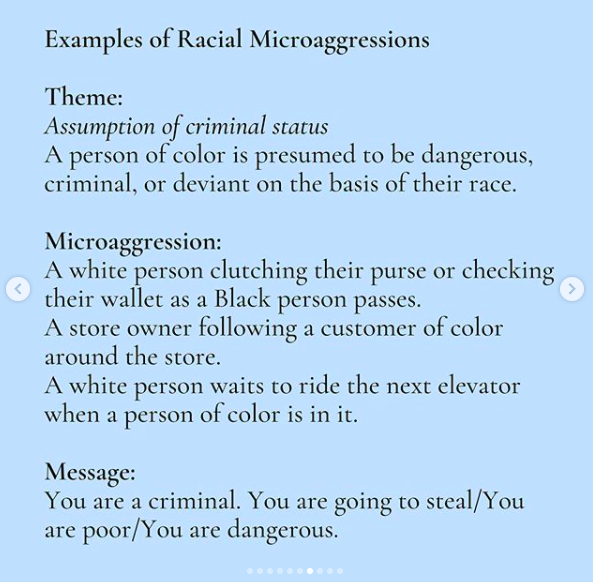 5. The "denial of individual racism" microaggression

These microaggressions occur when a white person denies their own racism and racial biases, silencing or downplaying the concerns of the People of Color they're speaking with. 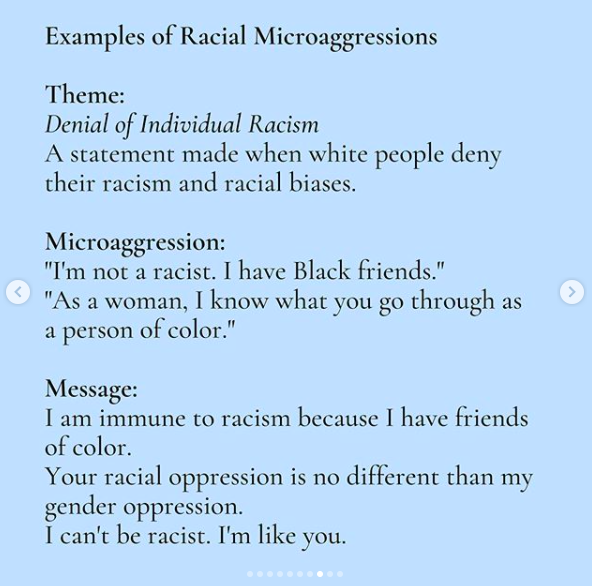 6. The "myth of meritocracy" microaggression

These microaggressions suggest that race doesn't play a role in success. They're often used to discredit anti-racist policies like affirmative action and suggest People of Color simply need to work harder to correct racial inequity. 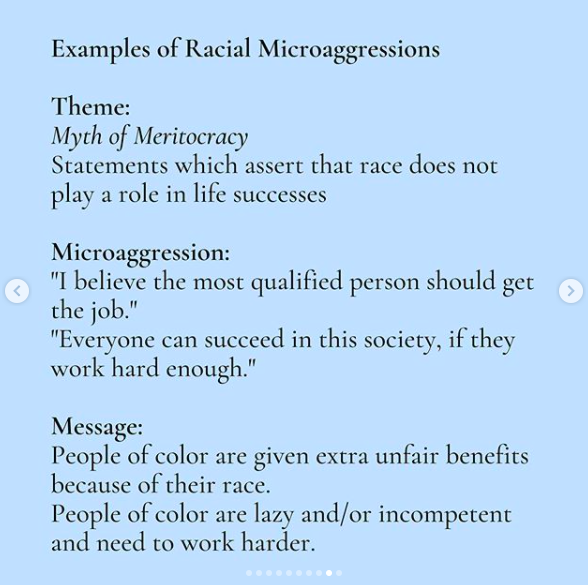 Microaggressions of this type communicate that white cultural values and communication styles are ideal and ask People of Color to assimilate to them and deny their own culture. 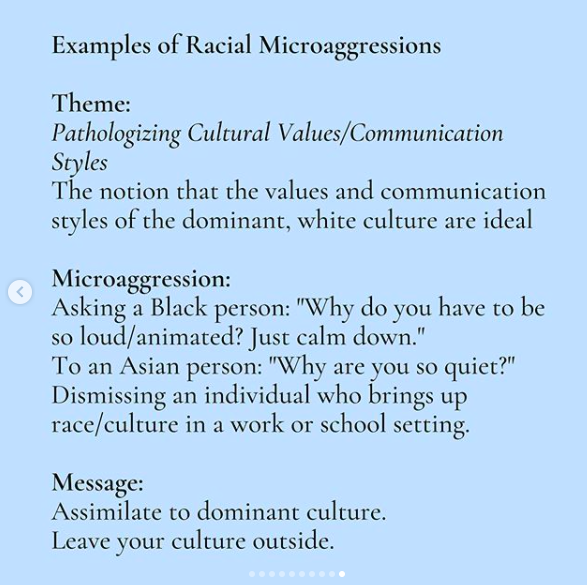 Help me find a job.