Believe Anything Is Possible, Pay Attention and Ask Questions — Advice From a Senior Vice President

This post is part two of two in a mini-series about Cristina Santos, Senior Vice President, Head of Diversity, Equity and Inclusion at Capital Group. You can read the first post here.

For women looking to advance their careers and find confidence, “You also have to tell people there is room for you at the table,” says Santos. “Be the reason for the exception. If there is one person chosen, there is no reason why that person wouldn’t be you. This mindset helps us all to go into conversations a little differently.”

This is only one of the many pieces of advice Santos has for women trying to advance their careers. In this article, Santos shares her best tips for other women working their way up their own careers, how she landed at Capital Group and more. Read on to learn more…

What were some important professional lessons that you’ve learned recently?

I’ll start by sharing a quote from Glennon Doyle’s book, Untamed, which is: “We can do hard things.” We can do really hard things. From everybody working from home to making meaningful change when it comes to racial injustice, social justice issues and addressing inequalities in the workplace. No one would have ever thought that some of the progress that we’ve seen in the last 12 months was possible in the years before. I don’t think I will ever say again, that’s not possible. This year has been nothing if not the perfect response of anything is possible — of course it is.

A perfect example of something that has been accelerated as a result of the racial reckoning is data transparency. Today, the external world wants to talk about representation, challenges and opportunities. Candidates want to know this information about a potential new company — this is one of the reasons I joined Capital Group.

Another lesson I’d like to highlight is one that I learned prior to my time at Capital Group. There was a point during the fall of 2020 when I just stopped taking anything personally. My colleagues had the greatest intentions in the world, but there was a constant flow of different people knocking on my door and telling me how I should be doing my job. I had to be really in tune with my own feelings and have an honest conversation with my boss about my frustration. 2020 was the year of honest conversations.

It took the most senior leader in my previous organization to say, “I need you to hear me and understand that we are only able to do these things going forward because of everything that you’ve done. There is nothing you could have done to prepare us better or differently based on what happened to George Floyd or what’s going on across the country.” It was one of those watershed moments.

The second you’re able to turn the corner and not make it about you, the more open you will become to finding solutions and having balance. It’s not all wrapped up in who you are and your identity — it’s a hard lesson to learn.

Tell us about how you landed at Capital Group.

I wasn’t looking for a new role per se, but I always left my light on via LinkedIn because I think it’s a good practice to know your value in the marketplace. It gets your mojo going to get calls from recruiters and know that you’re talented. It’s also really important to remind yourself that you always have options.

At the time, I really enjoyed what I was doing but had a short list of wants for my next career move. If I was going to leave, it would be for a global remit (ideally based in the U.S.) and for a company with a foundational understanding of what DE&I is and what it’s not — I wanted my work to be taken seriously and land at a company that knew what was going on in the industry.

While I didn’t respond to the first message I received from Capital Group, but when I gave it  a second thought, I considered that it might be nice to take on a challenge in a different industry. I knew I could sift through my skills bucket and transfer a lot of the knowledge I’d gained from my previous experiences. I knew I didn’t want to build a DE&I function from scratch because, frankly, that’s exhausting — I knew I didn’t want to be in pure build-mode. I ended up going back to the Capital Group recruiter after some time and asking if they were still looking. 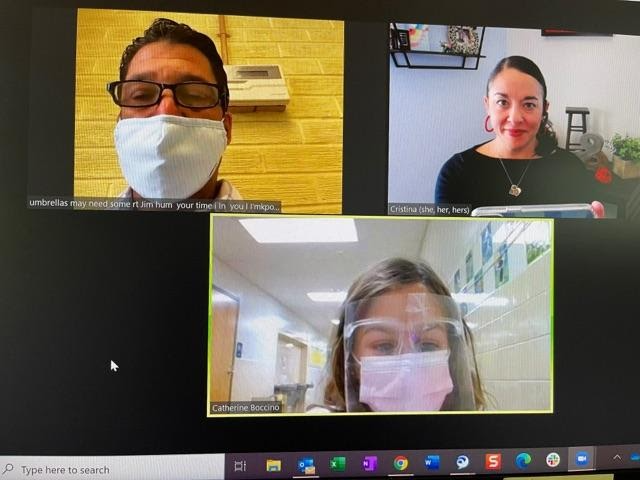 Santos on a Zoom call with her husband and daughter as part of a student-led parent conference for school. Photo courtesy of Capital Group.

My confidence was tested during the interview process for my current role because it was long and tenuous. It made me question what I really wanted. The first question I asked was why has this job been open for so long? It had been open for nine months.

It was so intriguing how thoughtful and thorough the interview and selection process is at Capital Group. It really drew me in. It was kind of fun learning more about the role and the company because it was truly a two-way dialogue, and that’s what I enjoyed. Sometimes candidates (and maybe women, in particular) feel like they would be lucky to go somewhere new, which makes the interview process emotional. For me, this was very unemotional because it was a two-way interview, which made it a balanced process. There was a healthy detachment which brought a lot of clarity to the candidate journey for me.

When I was interviewing with Capital Group, I was also interviewing alongside another company which was a very different size and scope. It was fascinating to be able to compare and contrast the number of interviews, response time, tone of communication and level of engagement from everyone on the recruiting team and all the way up to the chairman. Watching it all unfold was something that I will always remember. When I told the other company that I wasn’t going to continue along in their process, they were shocked. I took the opportunity to give them some constructive feedback about their stretched timelines, inattentive communication and that the recruiter reached out to me twice about another job on the team I was already interviewing for.

While considering my offer from Capital Group, it was important to have a conversation with myself first. I asked myself why I would leave, what was going to bring me joy and where I wanted to do this work. I had the space and opportunity to reassess and it became crystal clear that it was time for me to invest in myself.

Any advice for communicating your needs, finding confidence or just overall inspiration?

Pay attention. You need to know what brings you joy. Pay attention to what other people tell you you’re good at and then marry those things with what you want to seek out. When you can uncover the best version of yourself, that’s a recipe for success. If you need inspiration, start a kudos file, and read past performance reviews. There’s also something fun about refreshing your resume when you’re not actively seeking a new position.

Further, I remember having a big epiphany when I first got into the HR function. I was astonished by how often people outwardly ask for things. Whether it’s negotiating a salary, moving roles, getting into this program or that; I thought: If only someone had told me earlier that I could ask for those things. That lesson took hold, and I just started asking for it. The second I started doing that, doors opened up all over.

One thing I love about Capital Group is that we highly encourage people to get involved in a lot of things. We are less linear than other organizations in that sense. It takes guts and courage to raise your hand and call upon someone.

It’s encouraging to project a certain level of humility, particularly at a company like Capital Group. What sets us apart is that nothing is done in isolation. We are collaborative and encourage perspectives from all angles, just like the saying, Nothing About Us Without Us.

Fairygodboss is proud to partner with Capital Group. Find a job there today!