Chris Evans Defending Daniel Craig From Twitter Dad-Shamers Is Everything

While women are often the subjects of shame for their parenting decisions, dads aren't totally exempt — Morgan called Craig an "#emasculatedBond" for caring for his son safely in public, suggesting that a dad, well, being a dad is somehow emasculating. “Oh 007.. not you as well?!!! #papoose #emasculatedBond," he tweeted.

Captain America came to Craig's rescue in response to the Good Morning Britain host by tweeting: “You really have to be so uncertain of your own masculinity to concern yourself with how another man carries his child. Any man who wastes time quantifying masculinity is terrified on the inside.” 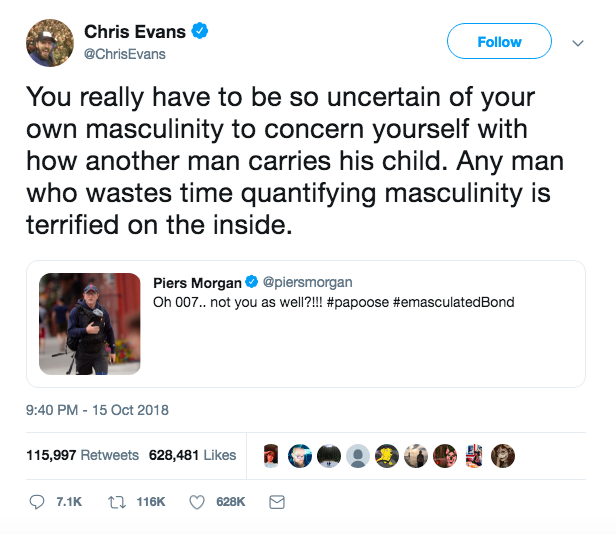 There's also the fact that fathers shouldn't be shamed for taking on parenting duties — it's in the job description. Fathers are supposed to be paternal.

Twitter users are, to no surprise, jumping on the bandwagon and supporting Craig. Dads are sharing their own photos carrying their children in carriers on their chests by the droves. They're tweeting out captions like "Proud dad with tactical baby vest," and "I was so proud to go out in public with my son strapped to my chest — and in time my daughter — so the world would know I was a father, and I could still carry the shopping home!"

Many are also tweeting just how "masculine" fatherhood is, in and of itself.

But, make no mistake; fathers shouldn't be praised for carrying their children either.  The assumption that a father, like Craig, is doing anything extra by carrying their child (or, say, going to a parent-teacher meeting or changing a diaper or visiting the pediatrician) hurts both men and women alike. As a society, we have a tendency to put fathers on a pedestal for taking on the same responsibilities that are just expected of moms on a daily basis.

Parenting means sharing childcare responsibilities. Toxic masculinity hurts both men and women alike; and, likewise, commending those who don't subscribe to toxic masculinity isn't necessary — that's how things should be.

So as Captain America says, let's let dads live. But let's keep the photos coming, too...

8 Comments
Browse recent articles
How Embracing Challenges Leads to a Dynamic Journey With Multiple Careers
Considering a Career Change? Use This 3 Step Guide to Make Sure You're Ready
Advancing Quickly and Always Learning: Exploring My 6 Years of Growth at 1 Supportive Company
How to Ask for a Raise: The Ultimate Guide to Get What You’re Worth
Have You Been Waiting Out a Long Overdue Promotion? Try This Approach to Speed Up the Process
How Northwestern Mutual Helps Me Succeed as a Working Mom
See more
Achieve your career goals.
Be part of the largest online career community for women to find jobs, advice, and support — for free.