This year isn't the first time that GQ has announced a woman among its annual “Men of the Year” honorees, but it may be the first time people are this mad about it's implications.  Plastered on the cover of the magazine’s 2018 iconic “Men of the Year” edition is tennis extraordinaire Serena Williams, with the words “Introducing the 2018 ‘WOMAN’ OF THE YEAR.”

At first glance, readers might applaud the magazine for putting a fierce female face on the cover of their magazine. But the quotation marks surrounding “woman” have deep-rooted implications, even if they were innocently placed.

Virgil Abloh, who collaborated with Williams on a line for Nike and is known for incorporating quotation marks in his clothing designs, reportedly designed the typeface for the magazine cover. But because Williams has been called a man for appearing “outwardly strong” time and time again, some readers have interpreted the punctuation as a sexist slight against the tennis all-star.

After all, when Gal Gadot was named last year’s “Wonder Woman of the Year,” there were no quotes around woman.

“It has been said I don’t belong in Women’s sports — that I belong in Men’s — because I look stronger than many other women do,” Williams once wrote in a public letter on Reddit. “(No, I just work hard and I was born with this badass body and proud of it).”

Twitter users have promptly chimed in, criticizing GQ for not catching the potential interpretation before publishing the punctuation.

“I can’t believe no one at GQ thought perhaps with misogynistic and violent trans insults that Serena (and Venus) have dealt with for the last almost 20 years, to not put woman in quotation marks,” one Twitter user wrote. “Editorial rooms are a f****** disaster, all over this country. I’m offended for her.” 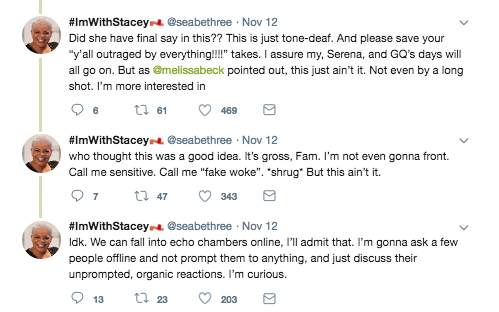 Another tweeted: “It’s definitely off putting especially for an athlete who has been critiqued for not being womanly/not a real woman in all sorts of racist and problematic ways.” 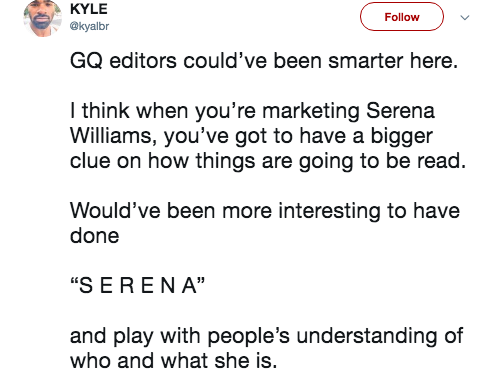 When one Twitter user tweeted that they couldn’t tell if the quotations denoted racism or if we’re all just too “woke.” Another user responded: “In the context of serena williams, a person who has been mocked for her appearance and deliberately misgendered for years... this aint it, virgil.”

Another Twitter user who rebutted the comments suggesting that “not everything is a thing,” wrote: “Everyone knows Virgil. We know his designs. We get the quotations. Doesn’t mean putting quotes around woman makes it any less insensitive esp. considering the masculinization of Serena and black women in general!”