Mystery Woman
Tell us more for better jobs, advice
and connections
YOUR GROUPS
Discover and join groups with like-minded women who share your interests, profession, and lifestyle.
COMPANIES YOU FOLLOW
Get alerted when there are new employee reviews.
YOUR JOB ALERTS
Get notified when new jobs are posted.
Personal Appearance

How much money do you spend on your personal appearance each month? It's an interesting question, and one recently that spurred conversation surrounding the gender pay gap in the FGB community, where FGB'er Basically Cher has posted the question.

"Given all the data that's out there on the impact of not wearing makeup to work (i.e. you're seen as less professional and ultimately earn less money), many would make the argument that 'personal grooming' has an unfortunately direct tie to women's career potential," she writes. "So, if these purchases — makeup, haircuts and coloring, manicures, office attire — are ones we *have* to make for work, my feeling is that the gender pay gap may be even worse than we think. The money for this is coming straight out of our paychecks, after all, and men don't have to pay for these same things." 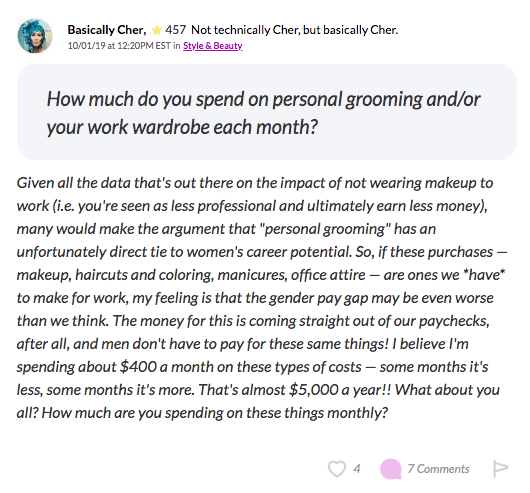 Basically Cher isn't wrong. In fact, makeup and style both impact the way we perceive women's professionalism. There's a wealth of research out there that supports these claims. Studies show that "attractive" people earn roughly 20% more than "average" people. That may be because women who wear makeup are reportedly considered more competent than those who don’t.

Meaning? Putting on makeup can result in heftier paychecks for women — but then, makeup products themselves cost money, and often not a small amount.

It's a double-edged sword, especially when you factor in the impact of one's specific type and quality of makeup. In 2011, researchers explored the ways in which we perceive others particularly based on their makeup. To accomplish this, they photographed 25 white, Black and Hispanic female subjects aged 20 to 50 in four different ways — they were photographed barefaced and then with “natural,” “professional” and “glamorous” makeup looks. Then, 149 adults checked out at the photos for 250 milliseconds, which is considered enough time to make a snap judgment, according to the research. Another 119 adults were offered unlimited time to look at the exact same faces.

All of the respondents generally considered the women with makeup to be more competent than the barefaced women, regardless of how much time they had. But then, the more time they had to evaluate, the more they judged women with "glamorous" makeup as "untrustworthy," which, of course, is an unfavorable trait, especially in the workplace.

In other words, the research suggests that wearing makeup can signal status, but women are expected to balance a Catch-22.

They're told that "less is more" — but don't go without it. To do this, they may need to spend more money on better-quality products that don't cake on their skin or that appear more natural. Or they can choose to forgo makeup altogether, but they risk the penalization of being deemed incompetent, and, therefore, potentially hurting their advancement in the workplace. Either way, it's more money out of their pockets or less money put into their pockets.

And the same goes with their style of dressing. A Yale University study suggests that dressing well can affect the way your colleagues see you, how confident you are and how you are able to analyze the bigger picture. In fact, style matters down to the color. According to 2017 research from SmartRecruiters, black is the safest choice of the surveyed 180 applicants who got hired; 70% of the hired candidates reported wearing mostly black outfits to interviews, while just 33% of the rejected candidates wore black. Meanwhile, in 2013, CareerBuilder and Harris Interactive asked hiring managers and HR representatives about the best color to wear to a job interview, and orange topped the list for the absolute worst color, as 25 percent of respondents said that they associated it with someone who is unprofessional.

For women, in particular, how they dress can make or break their careers.

All of this research, therefore, suggests that to invest in your personal grooming and work wardrobe is, unfortunately, a requirement for women's career advancement in many ways. And, because of women's need to spend money to meet preconceived standards, investments in personal grooming and work wardrobes that will fit society's standards boil down to being even more contributors to the gender pay gap. (That's right — because it's 2019, and women still earn just 79 cents to the male dollar.)

In Basically Cher's post, she said said she's spending about $400 a month on these personal grooming costs — that equates to almost $5,000 a year. And other FGB'ers are spending hundreds, too.

"Personal grooming is around $100 a month on hair and nails, but as for wardrobe, I personally only buy clothes in April and October to save money on end-of-season clothing," said FGB'er Nakia Whittaker-Woody. "As a single mother for so long, this was a great solution for getting great career wear at discounted prices."

Another FGB'er says that she tends to splurge.

"Well ladies I am very good to myself," said Robin Stone. "I spend $100 to $500 a month. The higher months include a mani, pedi and hair cut/color. It’s expensive to maintain our image, but I believe worth it."

That said, Stone, like Whittaker-Woody, has figured out ways to better manage her money when it comes to her appearance, she adds.

"I’m a big fan of ThredUP; I cannot begin to tell you the $$$ I have saved on this site," she explained. "In addition, I’m a big fan of LeTote or GwynnieBee as wardrobe costs can be controlled by these clothing rental options."

While some women shop seasonally and others shop rentals, others have found ways to spend as little as possible by maximizing the products they already have.

"I spend roughly $5 to $35 every month, but I am a massive thrift store shopper looking for killer pieces to work in, and I have a shampoo and conditioner system that lasts for months — and so do my all-natural soap bars," said Crystal Rhineberger. "Often the $35 is because I had to buy razor blades, tampons and hair color in the same trip. I am also an avid coupon user."

Rhineberger is not alone in her saving habits, but many women who try to budget better struggle to do so.

"I work in sales, so I have to be dressed to impress all the time," said Taylor, who works in medical sales. "I am constantly taking clients out to lunch, dinner and happy hours, and so I need to be dressed well so that they take me seriously and I can make sales. Because of that, I generally spend probably about $400 a month on clothing. I want to appear as professional as possible, so I do it."

But it's not only client-facing jobs that require women to dress in certain ways, however.

"I work in a primarily male-dominated office since I work in tech," said Hannah, a frontend developer. "I typically spend a lot more on my clothes than I'd like to — probably about $300 a month — because I need to shop in nicer stores. I don't want my colleagues knowing my age; I already have my gender working against me, and I don't want them being ageist, too. And, because so many of the stores these days sell 'trendy' clothes, I fear I'll look younger. So I shop at higher-end stores to find more professional-looking clothes to wear to work. I don't want to spend the money on my work wardrobe, but I don't really have a choice."

Other women spend so much money on makeup that they need to cut back on other things, like coffee.

"I spend so much money on makeup that I tell myself I need to cut back on other stuff like coffee and lunches out," shared Jessica, who works for a small book publishing company. "I love makeup. It's sort of my creative outlet, so I don't mind spending money on it — but I do probably spend like $200 a month on new products like foundations and lip glosses that I go through pretty quickly. Other stuff like blushes and bronzing powders tend to last me longer, so I don't always need to stock up on everything. But when I do need all of it, it only adds to the cost. I buy good stuff, too, because I have sensitive skin and I don't want wrinkles (ageism at work is real, too!), so it adds up fast. I try to cut back on hitting my coffee spot to once a week rather than every day, and I try to bring my lunch to work most days, to make up for it all."

Whatever women spend on their appearances, even if they save, it's still arguably more than most men likely spend. And that certainly contributes to the wide gap in wealth that's not closing any time soon.