Mystery Woman
Tell us more for better jobs, advice
and connections
YOUR GROUPS
Discover and join groups with like-minded women who share your interests, profession, and lifestyle.
COMPANIES YOU FOLLOW
Get alerted when there are new employee reviews.
YOUR JOB ALERTS
Get notified when new jobs are posted.
The Twitter-sphere

Keira Knightley, the actress we all know for her obsession with corsets, can now add "author" to her LinkedIn profile. She recently penned an essay for "Feminists Don’t Wear Pink and Other Lies," an anthology edited by journalist Scarlett Curtis.

But some people on Twitter wish the actress would've stuck to the screen. She is facing massive backlash for her essay – a letter to her daughter titled "The Weaker Sex" – in which she compares the gut-wrenching reality of childbirth to a fairytale version of motherhood she believes Kate Middleton embodies.

"You came out with your eyes open. Arms up in the air. Screaming,” she tells her daughter. She describes "the vomit, the blood, the stitches... the blood running down my thighs, cellulite" of childbirth. Then, she juxtaposes this gritty, almost animal experience to Kate Middleton's public appearance only a few hours after she gave birth to Princess Charlotte.

"She was out of hospital seven hours later with her face made up and high heels on," Knightley wrote of Middleton. "The face the world wants to see. Hide. Hide our pain, our bodies splitting, our breasts leaking, our hormones raging. Look beautiful, look stylish, don't show your battleground, Kate."

Twitter thought this attack on a personal experience was completely uncalled for...

... and a textbook example of women tearing down other women in the name of feminism. 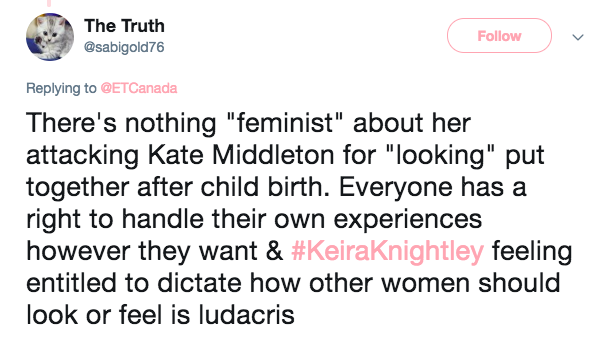 But one viral opinion argues everyone is missing the point.

Writer Chitra Ramaswamy suggests that we're hiding women's experiences by dictating that women must affirm others rather than spread their truth.

"Let’s be clear. Knightley is not personally “slamming” the duchess for giving birth and then putting on some lipstick. Her attack is squarely aimed at a world that induces women to “hide,"" she writes. "The recounting of one experience doesn’t automatically negate the worth of another, just as criticising another woman (which isn’t what Knightley is doing anyway) doesn’t automatically make you a double agent of the patriarchy. And yet, whenever a woman dares to open up about her labour she is castigated for mum-shaming and woman-hating."

It is widely believed that feminism is rooted in critique – and more specifically, the critique of the powerful structures and institutions that create society as we know it. And sometimes, critiquing those structures means critiquing those in power who tell our stories.

Knightley wants to normalize the gritty truth of childbirth, and that means breaking up the false story that has been told for so long. It's nothing personal towards Kate.

But it is personal towards the patriarchy. In her concluding lines, Knightley seems to mimic society telling Middleton how to perform.

"Seven hours after your fight with life and death, seven hours after your body breaks open, and bloody, screaming life comes out. Don't show. Don't tell," Knightley writes. "Stand there with your girl and be shot by a pack of male photographers. This stuff is easy. It happens every day. What's the big deal?"

And she has choice words for all of us.

"So does death, you s--t-heads, but you don't have to pretend that's easy."

Personalize your jobs
Get recommendations for recent and relevant jobs.
Employer Reviews
West Monroe
4.6
It is a great place to work for some years, but there needs...
Delta Dental
4.9
As a whole, DD is 78% women! There are some incredible...
Recent Content
5 Ways to Find a Fully Remote Role Right Now
How to Use the 3 Secret Ingredients for Sustained Change to Promote Gender Equality as an Ally
‘We Belong Here’ — 3 Women Share How They’ve Found Community and Belonging at Work