Mystery Woman
Tell us more for better jobs, advice
and connections
YOUR GROUPS
Discover and join groups with like-minded women who share your interests, profession, and lifestyle.
COMPANIES YOU FOLLOW
Get alerted when there are new employee reviews.
YOUR JOB ALERTS
Get notified when new jobs are posted.
Data Deep Dive

More Women In Leadership Could Cut Down Workplace Harassment — But Not All Men Agree, Report Finds

Today, anti-harassment measures in the workplace are being discussed more than ever. Between 2018 and 2019, the amount of workplace sexual harassment content shared on LinkedIn increased by over 70 percent, as noted in the platform’s Global Talent Trends 2019 report. But talk doesn’t always correlate to implementation.

In November 2018, a year after the #MeToo movement surfaced and gained momentum, Fairygodboss updated its research around sexual harassment to reflect how much progress had actually been made for women in the U.S. workforce. Interviews with hundreds of women at that time revealed only 34 percent felt the situation had actually improved since #MeToo, with the majority believing things had largely stayed the same. A further nine percent felt things had actually gotten worse for U.S. women.

This isn’t for a lack of trying on companies’ part. According to data presented in LinkedIn’s report, more and more people report seeing their employers make an effort to address the plight of harassment on a global scale. After interviewing 5,000 talent professionals in 35 countries, LinkedIn found that a full 80 percent had seen their company implement at least one anti-harassment tactic in the past year.

The two most common of these tactics were highlighting existing company policies and promoting ways to safely report harassment, with 37 percent of participants in LinkedIn’s survey reporting seeing both at their companies. Adding or improving to those policies was the next most common tactic (35 percent), followed by: establishing a zero-tolerance policy (34 percent); holding training sessions (33 percent); increasing gender diversity of leadership (26 percent); and adding more ways to safely report (25 percent). 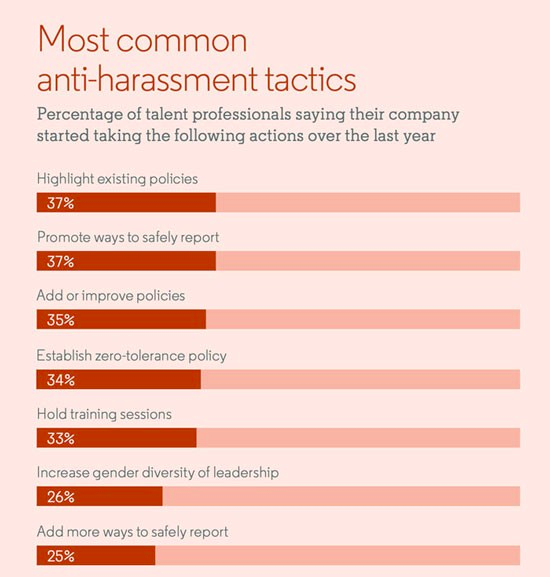 And yet, discontent around the state of harassment in the workplace continues. To explain this gap between effort and results, LinkedIn shared findings that demonstrate the tactics companies are prioritizing aren’t necessarily the same tactics employees feel would be most effective. Further complicating this chasm? The fact male and female talent professionals don’t see eye-to-eye on these tactics, either. 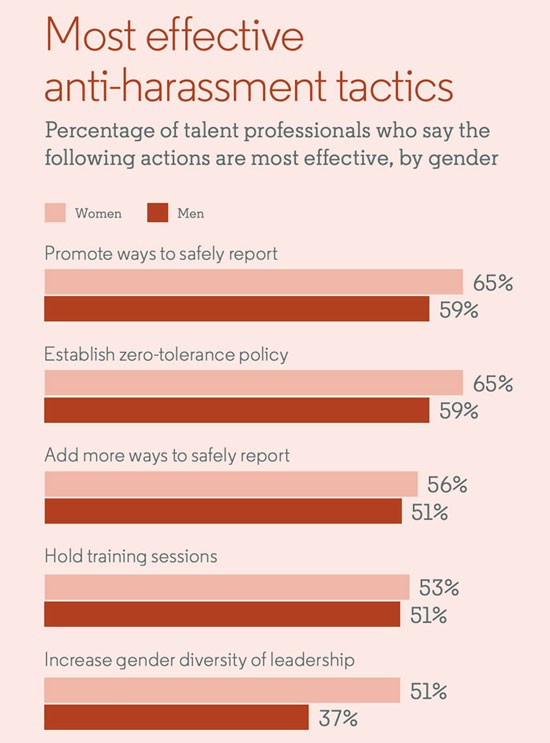 Gap #1: The anti-harassment tactics companies are using versus those employees believe would be most effective.

As illustrated above, a few key disparities exist between the tactics companies use and the tactics employees want them to use. For instance, adding more methods to safely report harassment was the least common tactic LinkedIn survey participants report seeing at their companies, and only 37 percent had seen such methods promoted. A full 65 percent of women and 59 percent of men, in contrast, ranked new, safe reporting methods as the most effective anti-harassment tactic.

Meanwhile, highlighting existing policies — which is the easiest tactic for companies to implement, by far — ranked No. 1 as the most common tactic seen by employees today. Yet, this tactic didn’t even rank within the top five strategies employees believe to be most effective. It’s clear that a gap in both perceived effectiveness and prioritization of policies between companies and employees is at play.

Gap #2: The anti-harassment tactics female professionals believe are most effective versus the ones men see as effective.

According to LinkedIn’s findings, women believe in the effectiveness of promoting new, safe reporting methods and zero-tolerance policies at slightly higher rates than men, while both groups feel similarly about the effectiveness of training sessions. Where a significant gap emerges, though, is in the perceived effectiveness of increased gender diversity in leadership. Fifty-one percent of women felt this was an effective anti-harassment tactic — yet, only 37 percent of men felt the same.

Separate data has shown that men are much likelier to feel the current gender makeup of leadership teams is sufficiently diverse, despite women continuing to hold only 20 percent of C-suite roles in the U.S. today, according to data compiled by Leanin.org and McKinsey & Co. That research showed nearly 50 percent of men think women are “well represented” on leadership teams where only one in 10 of those leaders is a woman. Based on these findings, a correlation can be drawn between men’s belief that gender diversity in leadership is already sufficient and their belief that more of this same diversity wouldn’t lower harassment rates.

But this correlation is inaccurate, according to research compiled by Fairygodboss in 2017. That research found that in companies where gender diversity in management was present, 79 percent of female employees felt the company was more gender equal overall, as compared to 34 percent of female employees at companies without gender-diverse leadership.

Having more women in leadership roles across company verticals will lead to a greater likelihood that the views and needs of the company’s female talent are represented. And when representation, coupled with transparent communication, is present, the gaps and discrepancies between a company and its talent are less likely to occur — including in the space of anti-harassment policies.