Mystery Woman
Tell us more for better jobs, advice
and connections
YOUR GROUPS
Discover and join groups with like-minded women who share your interests, profession, and lifestyle.
COMPANIES YOU FOLLOW
Get alerted when there are new employee reviews.
YOUR JOB ALERTS
Get notified when new jobs are posted.
SAHMs Salute You

A father of three recently took to Facebook to share just how "easy" his stay-at-home wife has it while he's out working all day — and it's resonating with stay-at-home parents across the platform.

Brad Kearns posted that his wife, Sarah, isn't up to much while he's off doing "workie stuff."

"Massive day at work today," he wrote. "We have our monthly senior leadership meeting. I have to travel for a 5 hour round journey split by car and train. Then when I rock up I have to sit there all day and do important workie stuff and have big work conversations. It’s exhausting. And what’s my wife doing? Not much really."

He proceeded to detail what she must be up to.

"All she has to do is get two boys up, dressed and fed whilst breastfeeding the third," he continues. "Then no doubt they’ll need to be taken outside or to a park to get all that energy out. How easy is that. All she has to do is sort their bags out, find the hats, pack some snacks and a spare change of clothes and buckle them into the car. Then while they’re there she’ll have to feed the baby again coz that’s what he does. Without letting go of him she’ll have to interact with and help the others on and off swings and stimulate them enough to not get bored. Its easy really."

But that's not even all of it — that only covers her morning, he wrote.

After they get home, she'll have to sort out their lunches that they probably won't eat while trying to get them to rest so she can online shop for groceries — really, they'll just want to ride their bikes, scooters and go-karts and run around in the yard until they exhaust themselves. And get grumpy.

"Well at 5 she’ll want to know where I’m at and how I’m tracking," he went on. "Groceries are about to be delivered and the boys are going crazy. [The baby] needs to be held and she has to feed them and begin night routine."

This includes preparing dinner (and making sure they eat it), running their baths, dressing them for bed and getting them into bed, all while holding the baby.

"Exhausted from non-stop torment and not a second to herself all day she’ll call me again to see where I’m at," he wrote. "She’ll be tired, smelly frustrated and sick of being touched. She’ll be irritable, yucky and want nothing more than a shower, a shampoo and a hot cup of tea... I’ll strut my [stuff] into the house at 7:30 after my massive day. She’ll be just chilling on her phone near a toddler or babies cot because they struggling to go to sleep and I bet the groceries are still out because she managed to just get the fridge stuff packed away. I’ll probably have to even prepare our dinner."

But, on the weekends, Brad said his wife will tell their children that they can have a motorbike because "daddy works very hard for [their] family." 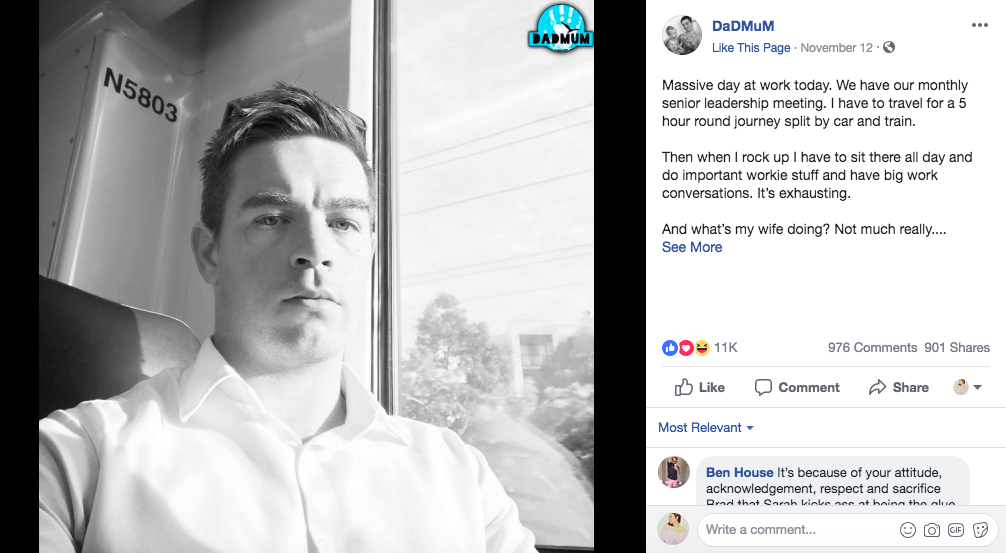 There's no denying how hard dad's like Brad work, parents who commented on the post acknowledged. But Facebook users were glad to hear how much Brad appreciates and understands his wife's work as a caretaker and the "glue" to their family, too.

"No doubt dads work long and often hard days, but it means the world to hear a dad acknowledge how long and hard and repetitive a mums working day is too!" one user wrote.

Another mom shared: "Being a stay at home mum for a year was far harder than my job as a barrister. It was so rewarding but it was hard!!! I love that you [recognize] your wife’s hard work and she appreciates yours."

And tons of the nearly 1,000 comments thus far are calling Brad and Sarah an "awesome team." The post has been shared 900 times already and has garnered more than 11,000 likes.

Two hours might not seem like a lot — but that's two hours of undivided attention, and doesn't take into account the rest of the day's work like grocery shopping, laundry, cleaning and cooking that consumes a bulk of many parents' days.

Brad and Sarah seem to have a support for one another — though, unfortunately, it's not always the case for stay-at-home parents for their partner to understand, if they even have a partner to split working/childcaring responsibilities with them at all.