Kate Middleton welcomed her third child at St. Mary’s Hospital Monday, April 23. And Prince William was by the Duchess of Cambridge's side to debut their eight-pound, seven-ounce son at 11.01 a.m. in the Lindo Wing of the Paddington hospital.

In a statement, Kensington Palace said, "Her Royal Highness and her child are both doing well," The Sun reported. She's happy and healthy and, as per usual, radiating.

Just one hour before welcoming her baby boy, Middleton's assistant-turned-stylist Natasha Archer — who helps her plan her outfits for official engagements and tours, and may have dropped off Kate’s outfit before the royal couple debuted their newborn — was seen leaving St. Mary’s Hospital, according to People. The royal mom donned a red Jenny Packham dress and nude heels to introduce her son to the world, just seven hours after giving birth, People reported.

Now, the internet is obsessing over Middleton's "perfection" just hours after delivering her son. And it's not OK. It sets unrealistic standards for other new moms who really don't need to be worrying about their appearances post childbirth. 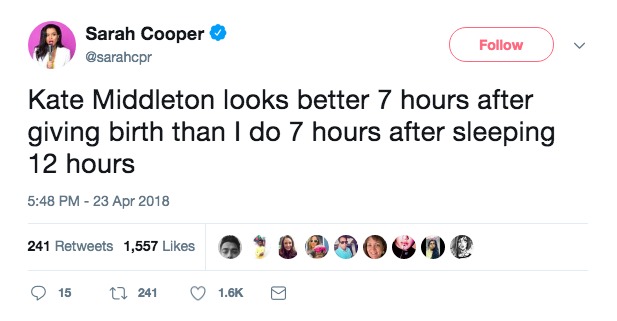 Source: Twitter
Besides, giving birth doesn’t exactly feel like an outpatient activity to many moms. Most women in the United States, for one, need two full days on average before going home, though the United Kingdom has one of the shortest postpartum hospital stays in the developed world — just a day and a half, according to a study in PLOS medical journal. Though most women, regardless of how much time they need or don't need, probably don't leave the hospital in designer clothing with blowouts and full faces of makeup. 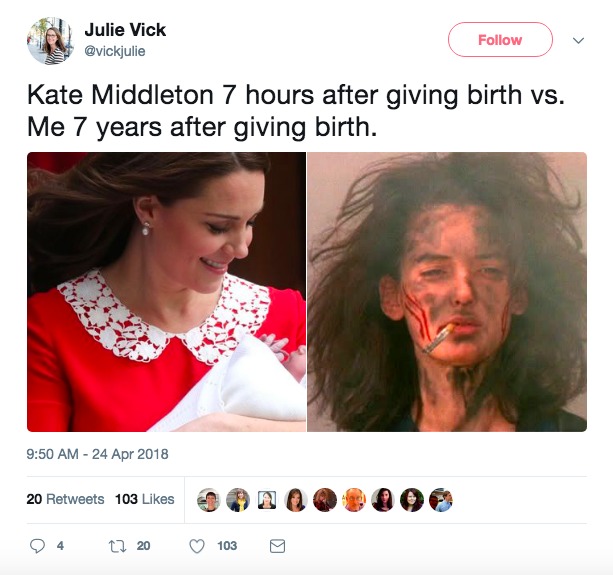 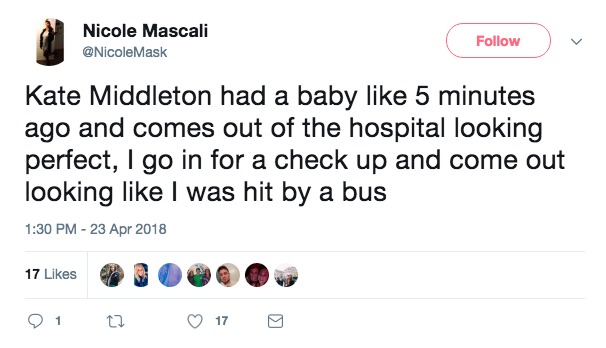 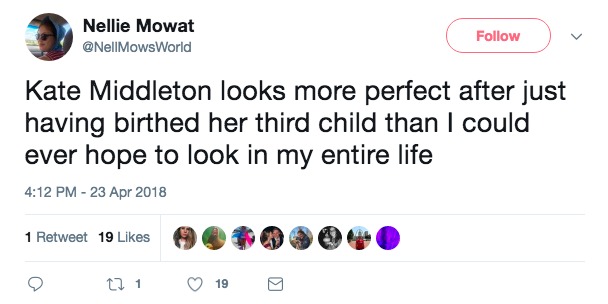 Source: Twitter
The products that were likely in Middleton's hair kit on Monday, according to Harper's Bazaar: L'Oréal Paris Elnett Supreme Hold Hairspray, Charles Worthington’s Volume and Bounce products and Texturizing Spray, Boots UK Essential Maximum Hold Unperfumed Hairspray, and Kiehl’s Crème with Silk Groom. While she famously did her own makeup for the day of her wedding in 2011, she's been associated with London makeup artist Arabella Preston, who may have helped prep her makeup for the day, as well. Most moms don't have a full-on glam squad in the delivery room with them.
And lest we all forgot that Middleton is also human, she's expected to give birth, put on a full face of makeup, don a designer dress and heels, and head home quicker than many women might be comfortable with so the fans camping outside the hospital waiting for her don't disturb the other moms delivering on the same day. 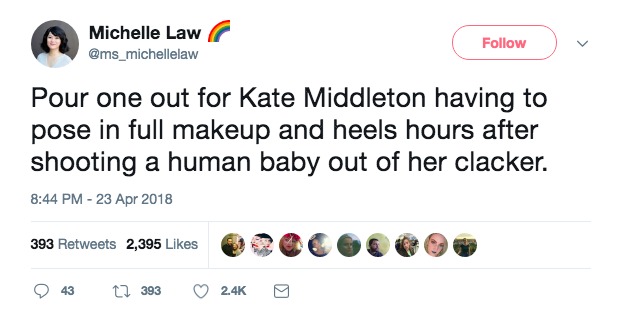 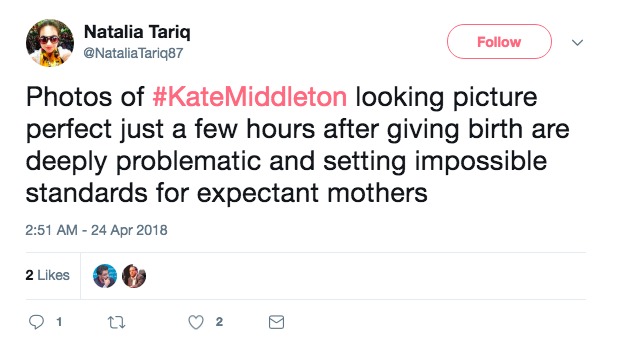 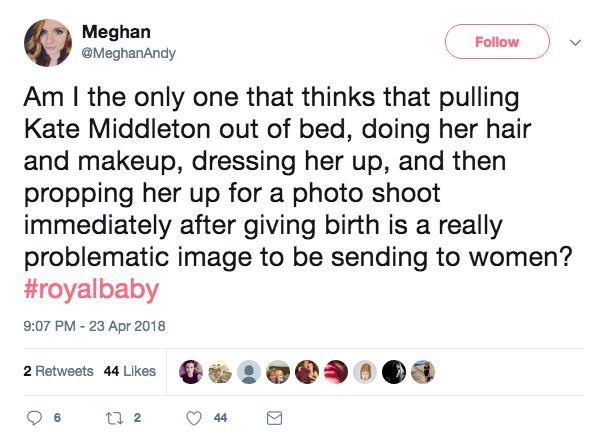 Source: Twitter
Maybe the Duchess herself wanted to wear slippers and pull her hair back, and maybe she wanted to stay longer in the hospital, but she's living in a different (royal) reality than the rest of us. And it's important we recognize, without mom-shaming her, that her childbirth experience is not the "norm."
In fact, there is no norm.
--