Have you ever asked for a raise?

The research on how often (and how successfully) women ask for raises remains split. In 2003, the book "Women Don't Ask," authored by economics professor Linda Babcock, famously put forth the argument that women are paid less than men because they've been socially trained not to ask. A 2017 follow-up study, however, titled "Do Women Ask?" countered that theory with research showing that women do, indeed, ask for money as frequently as men do — they're just less likely to get it.

For women who haven't yet asked for a raise at some point during their careers, the reasons they haven't are manifold. As part of a recent conversation about salary negotiations in the Fairygodboss Community, one FGB'er asked community members to share the stories of why they haven't yet asked for a pay raise. What's stopping them? The post quickly took off, with close to 50 women sharing their takes. Below, we've rounded up a few of the most common answers.

1. I’ve negotiated pay before a job offer, but never asked for a raise.

This FGB’er hasn’t had to actually ask for a raise and believes she’s always been rewarded with a raise when one would normally expect it. She calls herself lucky, and we agree!

2. I haven’t asked for a raise because I’m afraid to initiate the conversation.

A second FGB’er believes she deserves a raise but is afraid to actually ask for one. She’s not alone. Asking for a raise can feel challenging for a lot of women; not only are we still paid less than men for equal work and experience on average, we also more frequently suffer from imposter syndrome, which makes us believe we aren’t qualified for opportunities. Telling yourself you deserve this raise is the first step! Give yourself the confidence to ask for more money; we’re sure you deserve it. But make sure you prepare for the conversation with actual facts, numbers, examples and more of what you’ve brought to the company and why you believe you deserve a raise.

3. I haven't asked before because I feared the vulnerability (however, I'm currently negotiating a raise now!).

Another woman in the FGB community wrote that she is currently working on getting a raise. She’s waiting to hear back from her manager, which is common. “Opening yourself up to the vulnerability and potential rejection is the hardest part,” she said. And we agree. Rejection can always be difficult, but in this case, the risk of rejection is worth the reward. If you believe you deserve a raise, fight for yourself and your worth.

4. My boss said a raise was coming — but it never did. 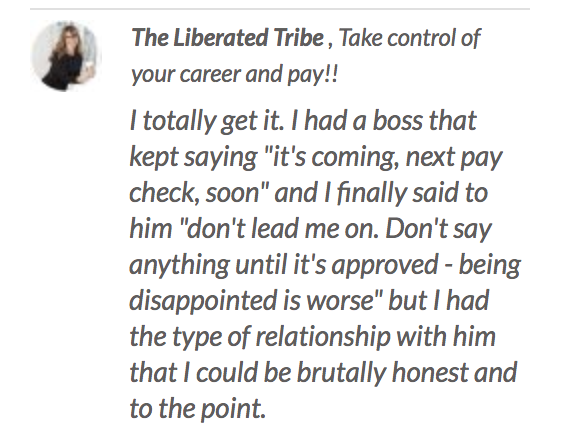 Sometimes rejecting people can be difficult, even for a manager. This FGB’er had a manager who just couldn't tell her the truth about her raise, or lack thereof. If you have a boss who you can be direct with, let them know you’d rather her be honest with you than misleading, especially when it comes to your hard-earned money.

5. I was told there wasn't the budget for me to get a raise.

One FGB'er shared that even before she could formally ask for a raise, it was made clear to her that her manager "didn't have it within their power" to approve raises due to budget concerns. Unfortunately, she added in a separate comment, she "didn't have the confidence nor know-how" at the time to pursue a raise withstanding those obstacles.

If you're interested in getting a raise but have similar concerns over budget, do some research on the compensation and performance-management calendar at your company. Salary increases are often timed around an annual or bi-annual date, when budget for management needs (including raises) is distributed. It's best to ask your manager for a raise a month or two in advance of that date; that way, your ask is coming to them before they've had time to spend their budget on other needs.

Have a question about money — or your career, or relationships, or life in general? Ask it in the FGB Community and hear from other women rooting for you.