Rethinking Failure: Why Treating Your Career as an Experiment Is Better Than Following Your Passion

This article was originally published on LinkedIn by Kathryn Zealand, Project Lead at X, the moonshot factory.

Highlights from “Building Your Path to the Moon: Kickstarting a Career in Taking Moonshots,” a virtual panel at the 2020 Grace Hopper Celebration

When I was 18, I was certain of my life’s calling: astrophysics. I studied math and physics as the building blocks for the career I wanted. I loved learning about how the world worked. I got in trouble once for setting off our school’s fire alarm after sneaking into the lab to test the “brilliant” idea of using smoke to try to see the density variations in sound waves. Our universe seemed to have infinite layers, as soon as I understood how something worked at one level (say, mechanically), it would get peeled away only to reveal new mysteries (say, quantum) underneath. Once I finished my undergraduate degree, I began a Ph.D. in theoretical physics, which felt like the deepest frontier of understanding. Everything seemed just right, except for one problem: I wasn’t really enjoying my research.

As fascinating as the field was, I felt incredibly removed from the tangible world that had initially fascinated me, and even more removed from having a real-world impact on people. One day, I confided these thoughts to a more senior colleague. Talk about unexpected kinds of mentorship: he laughed, and told me I’d only find more of the same if I stayed on the same track. I was devastated. I had thought physics was my life’s calling but it just didn’t feel right anymore. I dropped out of the Ph.D. program. It was an incredibly difficult decision, even though in hindsight it was the best one. At the time I felt like not only had I failed, but also that I was a failure. After having pinned my entire identity for years on being a physicist, I wondered, “what’s next?”

I’d heard the same career advice over and over: “Follow your passion!” But that advice can be terrible, especially for young people. It puts undue pressure on identifying a singular interest to pursue, when most of us don’t really know what our “true passion” is. Or if we think we do, we often set ourselves up for disappointment. I realized that the path I was on would probably lead to a career centering on a single term in a single equation related to the entropy of black holes — which I’m sure would be fulfilling for some people, but not me. The irony in my master’s thesis turning out to be a collection of a dozen different ways of solving an equation that didn’t work certainly didn’t escape me.

After leaving my Ph.D., I decided to approach my career as a series of experiments. The first question: “Should I stick with physics, just not my particular Ph.D topic?” I decided to invest a year tackling the most interesting physics I could find, and then a year doing something as different from physics as possible. I was grateful to be able to spend that first year at the Perimeter Institute for Theoretical Physics. The following year, I worked with a human rights NGO. I was surprised to learn I actually preferred the NGO work — and that my somewhat-unusual background was valuable. I didn’t have a law degree like many of my teammates, but instead of worrying I accepted that I was quite useless at the legally-focused part of the job. Instead, I was able to set up localized wifi networks, replace mobile screens in the field, and launch websites, which were needed too. I enjoyed working in a high-stress environment with a mission-driven team, but on-the-spot IT support wasn’t the direction for me. I knew I wanted to use my scientific training. 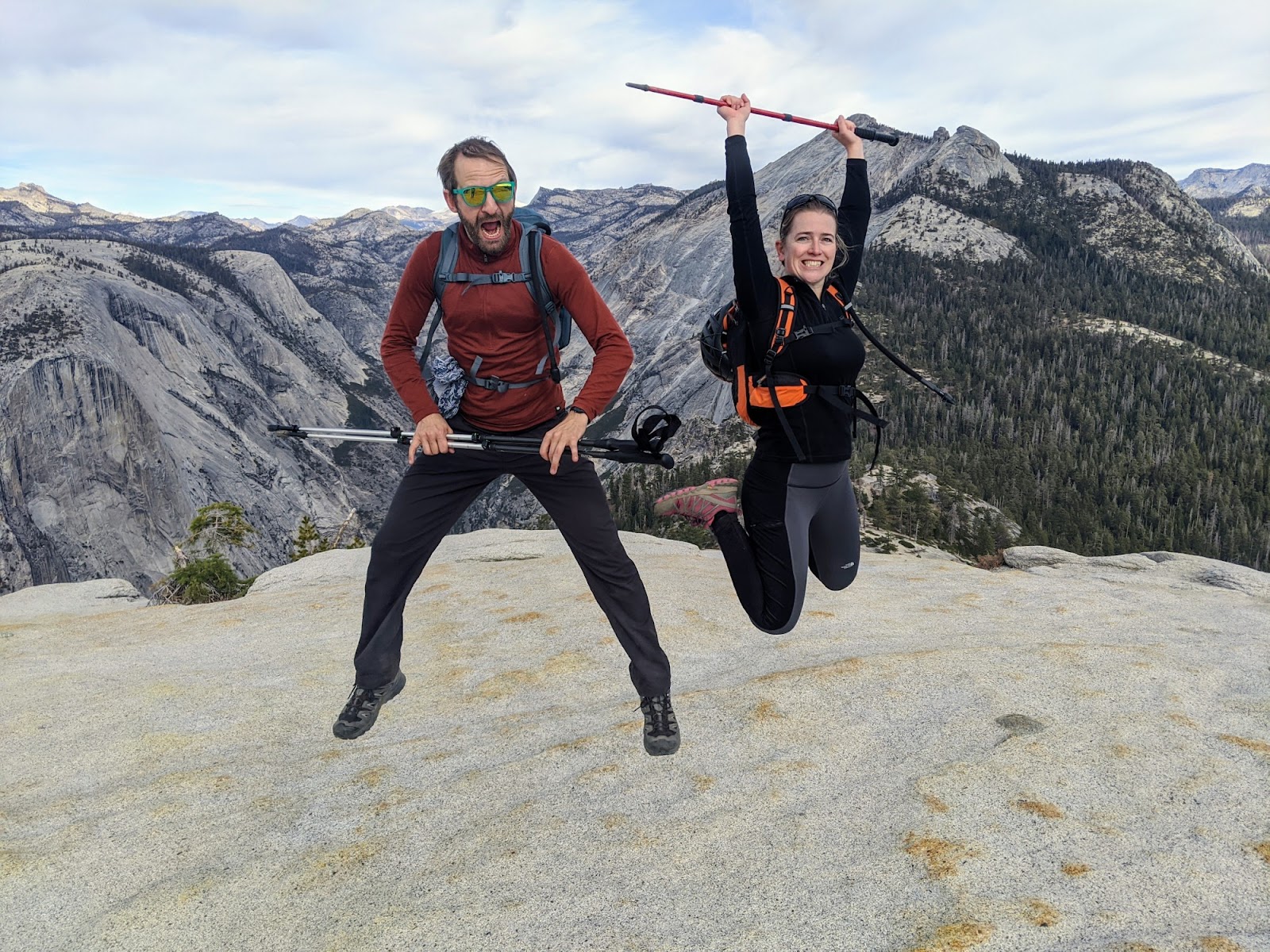 Silliness and play is something that's infected my professional and personal life, at Yosemite National Park. Image courtesy of X, the moonshot factory.

My next series of career experiments were explorations within the overlap of “high-impact” and “quantitative” — that is, relying on my mathematically-minded skills: everything from development economics to healthcare. I had a blast and continued to learn little things about myself, like “I should never take a job that depends on my ability to learn a new language, spell accurately, or be productive after 2 a.m.” I learned that I liked building things, from teams to hospitals. I learned I didn’t like work that felt too abstract, or dealing with bureaucracy. And after a decade of exploration, I found my “dream job” doing impact investing in East Africa. We worked to launch and invest in new agricultural processing technologies in rural areas with broken supply chains. I checked off each of the boxes that mattered to me: Impact, check! Team, check! Quantitative angles, check! Excitement, check! I loved my 9-to-5, even if it often ran from 5 a.m. until 9 p.m., but after one challenging day I realized that I was lonely.

All I wanted was to have a drink and chat with someone, yet for all of the travel, intensity, and impact of this “perfect job” I had no close friends within hundreds of miles. Sitting, alone in my cute but remote beach-hut home, I began to confront that familiar sense of doubt: that not only had my experiment ultimately failed, but that I was a failure again — or maybe I’d just never stopped being one. But when I took a deep look at what I had learned, I realized that although this had “failed” as a career path, as an experiment it had succeeded in teaching me in order to thrive I needed to be in a vibrant and supportive community, during and after work.

Now I’m at X, where “experimentation” is actually part of my day job. I started in our “Rapid Evaluation” team, where we try out dozens of wildly ambitious ideas a year, most of which never see the light of day. Some of the mindsets I developed earlier in my career are particularly helpful now. For example, being able to dispassionately abandon ideas that aren’t working out, even while caring deeply about the problems we’re trying to solve, can help process these as learning moments rather than failures. Now I’m leading an exploration we call “smartypants” where we’re trying to use smart fabrics, sensors, and AI to help people move, whether that’s getting my granny up some stairs, or myself up a mountain. We continue to fail and iterate along the way.

After reflecting on my experiences at our recent panel on building a career in moonshots at the annual Grace Hopper Celebration, I wanted to share the advice I wish I’d gotten earlier in my career — like when I thought I was a failure back at the start of my Ph.D. At times, my career  felt like a string of failures, but I was actually iterating and making changes when things didn’t work. Of course, it’s a huge privilege to take risks, but these risks can lead to revelations, like how these different experiences actually built my strengths. The fact they didn’t follow a linear path actually led me towards a wide-ranging career — much better, and more fulfilling, than if I had stuck with my original passion for physics. It feels strange to share my career journey publicly, since I still feel like I’m figuring it out as I go. But I’ve seen throughout my journey how many women often feel pressure to not only succeed but to be perfect — and how often it holds them back. I hope I’ll see even more women in STEM approach their careers with the same experimental mindset.

Fairygodboss is proud to partner with X, the moonshot factory. Find a job there today!