Serena Williams Opened Up About Missing Her Daughter’s First Steps, and Moms SO Get It

Celebrity moms definitely know how to use social media to connect with their fans. Chrissy Teigen’s Instagram feed features dozens of adorable photos of daughter Luna and new baby Miles, and although Kylie Jenner isn’t showing daughter Stormi’s face on social media posts, we get to see plenty of her tiny outfits and chic Gucci accessories.

But tennis superstar Serena Williams takes things in a more active direction, using her super-popular Twitter as a sounding board for gathering and sharing tips on breastfeeding, teething, and other parental concerns. The open, honest, and conversational nature of her Twitter allowed Williams to gather hundreds of thousands of mom followers, all eager to participate in the conversations and connect with Williams’ very human experience of parenting.

A prime example occurred last week, when Williams opened up to her followers about a bittersweet milestone moment in daughter Alexis Olympia’s development:

Williams, a worldwide champion many times over, spent this time training for the 2018 Wimbledon Games, a big moment for her after missing the Australian Open in the wake of Olympia’s birth and exiting the French Open early after a pectoral injury. In spite of her excitement for the tournament (in which she’s currently performing very well), she couldn’t help feeling a twinge of guilt over missing her daughter’s first steps, and her willingness to candidly express these feelings to her 11 million Twitter followers inspired other working moms to shower her with messages of commiseration and support: 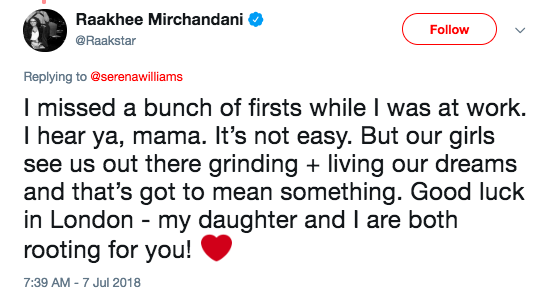 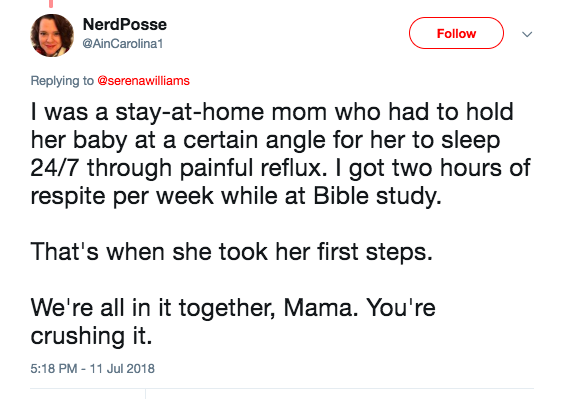 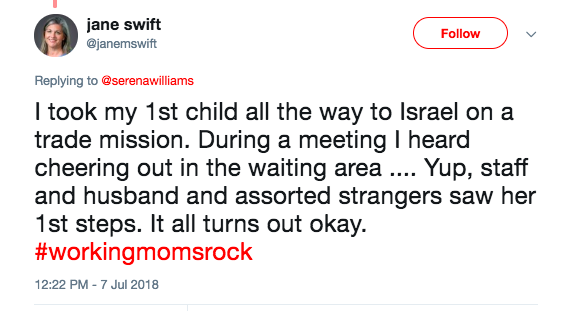 Although she’s a hugely famous pro athlete with the financial resources and support systems to match, Williams wisely and effectively uses her Twitter feed to forge a link to fellow parents of all economic levels, speaking to the universality of parenting and the struggles that all new moms and dads face, regardless of privilege.

And this “first steps” story isn’t Williams’ first foray into opening up about her experiences as a new mama: during a pre-Wimbledon press conference, she shared an anecdote about her decision to stop breastfeeding Olympia. “I literally sat Olympia in my arms, I talked to her, we prayed about it. I told her, ‘Look, I’m going to stop. Mommy has to do this.’ I cried a little bit, not as much as I thought I was,” Williams told reporters. Breastfeeding often shows up as a hot-button issue in parenting groups and blogs, with advocates inadvertently shaming those who can’t or choose not to feed their babies in that manner. Williams’ open discourse on breastfeeding and her difficult but well-considered choice to switch to bottle-feeding made many moms feel heard, and her willingness to admit to feeling some guilt over the decision only upped her relatability quotient, further strengthening her status as a crowd-favorite celeb mom.