There are some things that workers should never do in the office. Reheating last night’s salmon in the kitchen microwave isn’t going to make many friends around the office and would likely top the do-not list of most workers, as the aroma of foul-smelling foods can stink up the entire office for the rest of the day. Coming to work sick, for obvious reasons, also should be avoided.

But as appearance changes and a more open workplace learns to accept things once frowned upon, certain actions and behaviors are still frowned upon, according to a new study.

Staffing firm Robert Half developed a study with Accountemps, which included responses from more than 2,800 senior managers with companies housing more than 20 employees in major US cities, to find out the do’s and don’s for today’s workforce.

While nearly all senior managers interviewed for the project said organizations have become more accepting over the past decade, there are still certain things that are still looked down upon by senior management.

“Workplace policies today are designed to attract and retain employees, and that often means they’re more relaxed,” Mike Steinitz, executive director of Accountemps, said in a statement. “There can also be unwritten rules of behavior or dress that are specific to a particular company or industry.”

From the manager’s perspective, the biggest no-no in the office was using foul language, which more than half of respondents (54%) agreed to. Although some places of work encourage workers to bring their pets into the office, more than half of managers don’t agree with that notion finding that pets in the office isn’t considered proper behavior for their office.

Only 19% of respondents said they found bringing a dog to the office as acceptable.

And don’t even get started with politics. In fact, forget about them. With the 2020 Presidential election coming later this year, nearly half of managers said displaying political signs of messages isn’t cool for the office, so leave your favorite politician’s mask at home or wait for a Halloween party later this year.

But as the office has shifted into a worker-first culture, so has the mentality of what’s deemed acceptable. About one-third of companies in the survey said they see no problem with employees donning visible tattoos (35%) or non-traditional hair colors (34%).

Thirty-four percent of respondents encouraged a causal attire, which most offices have started to accept including some on Wall Street. 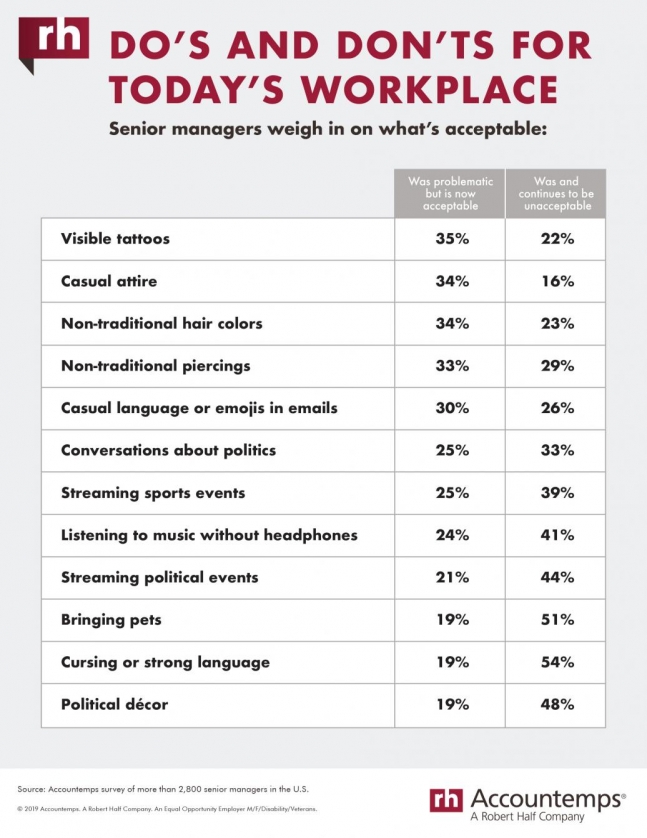 Beyond appearance, bosses are becoming more accepting of even unconventional ways of communicating, like using emojis in emails (30%).

Workers should still look over their shoulders when playing music without headphones and streaming live sporting events since more than a third of managers feel that both occurrences are unacceptable in the office. In addition, managers also feel streaming political events (44%) or talking about politics (33%) are inappropriate.

“Staff shouldn’t feel like they’re walking on eggshells at work, but it’s important to be respectful of others and ensure your actions don’t cause a distraction or compromise your professional reputation,” Steinitz added.

This article originally appeared on Ladders.