“I feel like I would be annoyed by me if I weren’t me,” Chrissy Teigen told Vogue  in the magazine's November 2018 issue. “I feel that all the time." Twitter doesn't seem to be annoyed at all by the model, Lip Sync Battle co-host, cookbook author, mother of two and undisputed Queen of Twitter, however. In fact, when Vogue dubbed Teigen the "last likable person on the planet," Twitter seemed to universally agree.

Teigen never shies away from keeping it real both on social media and in interviews, and her recent photo shoot for Vogue is just that: real. While the fashion magazine usually focuses on clothing and artistry, Teigen's shoot is about her — and all of the imperfections that come with motherhood and womanhood and just life in general. In the photos, she's donning everyday clothes and holding one kid while the dog is running away with a deflated beach ball. And in the interview — and all of the media surrounding her interview — she's being asked about real happenings in her life. She talks about the comments she receives and how much she actually cares about them, getting blocked by Trump and more.

She took to Instagram to share her Vogue photos with the caption: "Momma and Lu in @voguemagazine!!!! Loved everything about this shoot. Thank you thank you... Read the full article in The November issue or online!" And, following her post on the new issue, the tweets started flooding in.

Here are three tweets that prove why her shoot is so important. 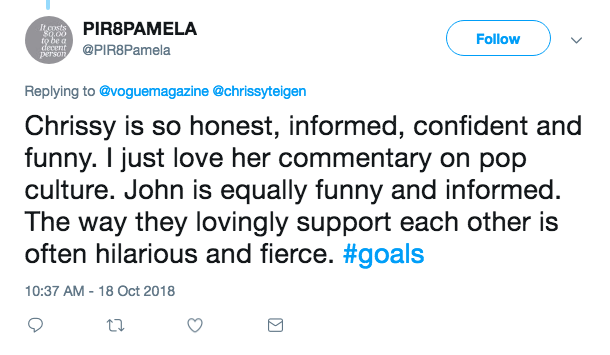 Teigen is "so honest, informed, confident and funny," one tweet reads — and it's true. Teigen has always been honest, and she's no different in this Vogue interview. She talks about how flattered she is from her social media followers, and also gets real about how much comments can really affect her.

"I’ll read a thousand of the sweetest comments — ‘You have the cutest family, I love your book’ — and then one person is like, ‘You look like the Bride of Chucky’ and I’ll be like, ‘Oh my God, @paulh7114620 thinks I look like Chucky,'" she says. "Much stronger people are like ‘I don’t care what you think.' I genuinely do care... I want to be liked.” 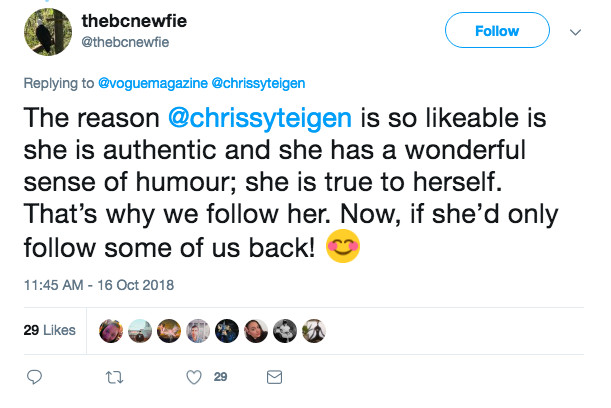 Teigen is so likable "because she's authentic and she has a wonderful sense of humor; she is true to herself," another tweet reads. Again, she's no different in her latest Vogue interview. She's not donning some expensive gown making motherhood look easy. She's herself in her element with her two children and dog.

Those close to her chimed into the interview to confirm just how much Teigen really is herself.

“Chrissy is real and authentic,” her friend Kim Kardashian West told Vogue. “She’s so open and honest with her audience . . . She also has the best sense of humor.”

“First of all, she’s funny,” he told Vogue. “And she’s candid. I think her candor is what’s so appealing — and makes her distinct from other celebrities people pay attention to. She tells it like it is.” 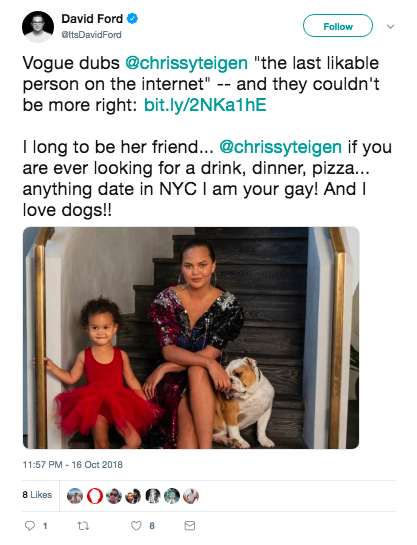 Vogue dubbed Teigen the "last likable person on the planet," and Twitter is agreeing. The article calls her "someone you want to sit next to, who’s as relatable as anyone who lives in Rihanna’s old house can be relatable."

Jason Gay, the writer behind the Vogue feature, even said: "In person, Teigen is immediately disarming — you feel you know her because you kind of do know her (I’ve seen her fridge on Instagram! I know those counters!)"

That's why Twitter users are practically begging for her friendship — they want to be her pizza partner.

After all, Teigen did tell Vogue: “I get made fun of all the time. People are like, ‘We get it, you like pizza.’ ”

1 Comment
Browse recent articles
How Embracing Challenges Leads to a Dynamic Journey With Multiple Careers
Considering a Career Change? Use This 3 Step Guide to Make Sure You're Ready
Advancing Quickly and Always Learning: Exploring My 6 Years of Growth at 1 Supportive Company
How to Ask for a Raise: The Ultimate Guide to Get What You’re Worth
Have You Been Waiting Out a Long Overdue Promotion? Try This Approach to Speed Up the Process
How Northwestern Mutual Helps Me Succeed as a Working Mom
See more
Achieve your career goals.
Be part of the largest online career community for women to find jobs, advice, and support — for free.