Mystery Woman
Tell us more for better jobs, advice
and connections
YOUR GROUPS
Discover and join groups with like-minded women who share your interests, profession, and lifestyle.
COMPANIES YOU FOLLOW
Get alerted when there are new employee reviews.
YOUR JOB ALERTS
Get notified when new jobs are posted.
Stay Away

A storm is raging on the parenting site Mom Confessions over a Jan. 20 post by an angry mother on the brink of divorce:

“This is an open letter to my MIL who I am absolutely furious with and her selfish, narcissistic attitude… how hard is it to understand the words that I speak when I say Don’t kiss the baby, Your face is nothing but a walking delivery system of herpes. Herpes. So don’t kiss the babies. I don’t care if your feelings are hurt. I only care about the well being of my child. So that means you keep your herpes infected face away from her. So please keep running around playing the victim and letting everyone know what a ***** you are. Your own mother is telling you are a selfish ***** for putting your grandchild at risk but still acting like a victim. And you wonder why your son told you that you would never see your grandkids. Because of your selfish needs a 3 week baby has herpes….”

She elaborated to commenters asking for details about her mother-in-law’s actions:

“I didn’t let her hold my child. My husband who can’t seem to get off his mother’s *** did thinking it wouldn’t hurt just the one time. Now our 3 week daughter is in the NICU for 21 days because of his negligence. Yeah he is in the **** too. I absolutely refuse to talk to him.”

The original poster went on to say that she’s now separating from her husband and will be filing for divorce papers unless he agrees to marital counseling over this issue.

Is this mom overreacting? Maybe… but maybe not. We’ve heard of babies catching herpes before. And, if you believed your baby had wound up in the NICU from being smooched by grandma, chances are you’d be pretty furious, too.

And then there was that terrible case of the baby who actually died from meningitis after being kissed by someone with a cold sore. That family has spoken out about the dangers of letting well-meaning family and friends kiss infants.

People on social media seem to side with the mama, for the most part: 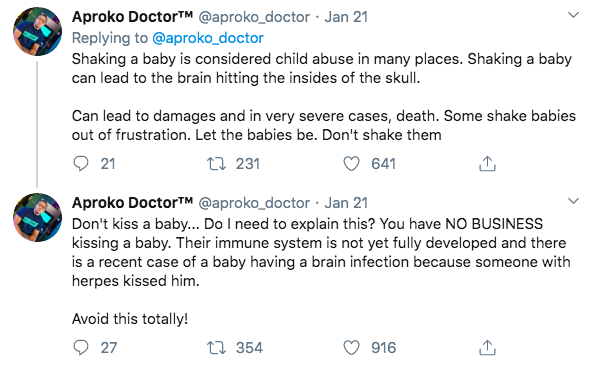 Physicians regularly warn people who are feeling sick not to kiss babies, because infants’ immune systems are especially vulnerable to a variety of infections and illnesses. Pediatrician Tiffany Hill of UT Health East Texas spoke with ABC affiliate WFAA to say that babies under the age of six months old are particularly at risk for infections such as RSV, or the respiratory syncytial virus. RSV can cause lung inflammation, bronchitis and pneumonia in infants as well as toddlers.

So, while some may think the mama over at Mom Confessions may be over the top, we completely, completely get where she’s coming from.

In other words? Keep your mouth off the baby, please. Don’t make us say it twice.

This article originally appeared on SheKnows.

Personalize your jobs
Get recommendations for recent and relevant jobs.
Employer Reviews
Triax Metal Products
No ratings yet
Demand better pay. They allow you to work as much overtime...
University of Central Florida
3.0
I worked in the Marketing and Communications department...
Recent Content
Get Job Search Ready in 14 Days
‘What You Have to Say Matters’ — Finding My Voice While Growing a Career in Customer Care
My Career Journey: Solving NSA's Most Complex Cybersecurity Challenges, Rising to Leadership & More