This Photo of Beyonce and Ed Sheeran is Proof of Inequality in Pop Music, Says Twitter

There are few names in pop music as big as Beyonce and Ed Sheeran. When the two stars came together to record Perfect (the duet), it was the answer to many music fans pop music prayers. Who would’ve thought the croony ballad would cause controversy about gender equality?

Over the weekend, Beyonce and Ed Performed at the Global Citizen festival in Johannesburg, South Africa.

The concert honored the late Nelson Mandela and raised money for Global Citizen, an organization with the mission to end global poverty.

And while that sounds like all rainbows and sunshine, the contrast between Beyonce and Ed Sheeran’s outfits raised some serious questions online about gender equality.

On stage, Beyonce wore an epic pink ball gown a la the most beautiful flamingo at the zoo. But Ed showed up in black jeans and a t-shirt. People began to question the amount of effort we expect women to put into their appearances, versus the men in their life. Especially famous women. 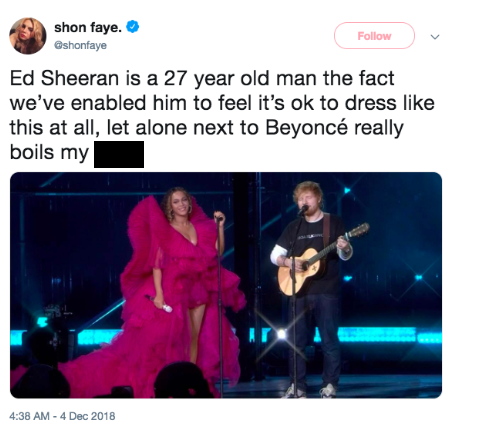 “Ed Sheeran is a 27 year old man. The fact we’ve enabled him to feel it’s ok to dress like this at all, let alone next to Beyoncé really boils my p***,” @shonfaye said in a viral tweet that started this whole thing.

“No shade but actual shade: Ed and Beyoncé together look like roughly 75% of heterosexual couples,” one Elle article read.

“When you’re as talented as Ed or Bey, you can get away with any dresscode,” @beewol wrote. “Oh and you set the trend, you don’t follow it.”

“Beyonce has always been going and Ed has always been laid back," @its_okaytho wrote. “This has nothing to do with the standards of men and women. It’s rather just a personal choice a singer makes.”

Yes, these outfits align with the respective artists brands.

But some Twitter users are pointing out that their brands being so different in the same genre of music is a direct reflection of the differing expectations we have for male and female artists.

Think about the amount of effort Beyonce must put into her concerts to be considered on the “top of her game,” while Ed Sheeran stands still with his guitar. Think of the constant red carpet looks Beyonce must invest her hard earned (albeit, billions of) dollars into. Think of the production and the hard-thought lyrics Beyonce has to put out to be considered an “icon.” Ed Sheeran’s biggest song of last year was a song originally penned for Rihanna.

“This photo is v v v v representative of what we expect from men and women at the top of their game, isn’t it?,” @sillyolddaniel asked.

“I get this. Even tho I appreciate good musicians in normal clothes, the double standard is ridiculous,” @garlicmeg wrote. 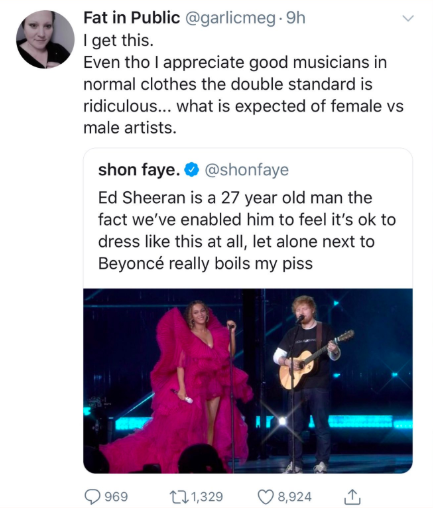 But this conversation isn’t really about Beyonce and Ed at all. It’s about something bigger: how to we qualify and quantify women's art? No one is asking Ed Sheeran's success to be collateral damage in this discussion.

Una Dabiero is an editorial associate at Fairygodboss. She likes pop culture, reading things that make her think, and hearing women's stories. Don’t follow her on social media (please), but do follow her on the FGB community.

41 Comments
Browse recent articles
Authentic Leadership: Lessons Learned at X
How to Deal With a New Boss and Navigate Changing Leadership
You Don’t Need to Be Loud to Succeed! How I’ve Grown in STEM By Cultivating a Thoughtful Presence
This Company Is a Top Choice for Remote Working, Makes Your Career Growth a Priority and More
How to Request a Leave of Absence For Mental Health Reasons — 5 Things to Know
5 Actionable Tips To Ensure Your Work Experience Section Is Top-Notch
See more
Achieve your career goals.
Be part of the largest online career community for women to find jobs, advice, and support — for free.