Jaime Sloan was on pace to set her own personal record in the 70.3-mile Ironman 70.3 in Tempe, Arizona, on Oct. 21, which is why she decided to pump some breastmilk before reaching the finish line.

The 34-year-old was tasked with swimming 1.2 miles, biking for 56 miles and running 13.1 miles in the half triathlon so, of course, she figured she'd multitask while doing it. After all, it wasn't the first rodeo for the active-duty Air Force airman, who gave birth to her second child in March. She's previously completed two full Ironman races — 140.6 miles each, in which she swam 2.4 miles, biked 112 miles and ran 26.2 miles. While she wasn't pumping during those races, as an active airman and mother of two, she's no stranger to multitasking.

In fact, a wealth of research suggests that many working mothers spend about 10 hours a week more multitasking than working fathers, shouldering a heavier burden. For Sloan, many onlookers tweeted that this triathlon looked like a walk in the park for the "superhero." 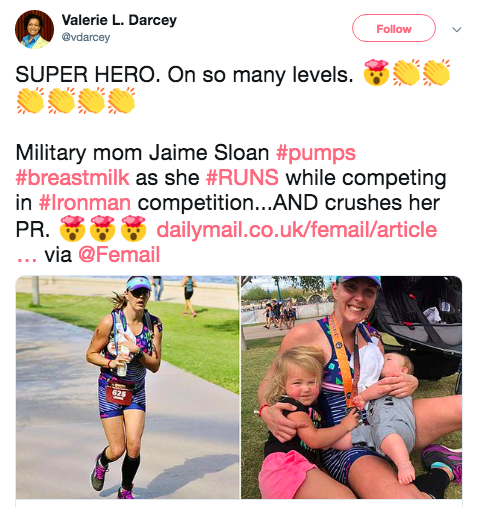 Photo via TwitterStill, she was nervous about the potential repercussions herself.

“I was nervous at first that I would get some weird looks or even get disqualified due to nudity,” Sloan reportedly told Kennedy News & Media. “But I did my best to cover up and make it work.”

One Ironman rule reads to "avoid indecent exposure and public nudity at all times during an event," noting that "indecent exposure/public nudity may result in a disqualification." Despite that women can finally legally breastfeed in public in all 50 states, legislation isn't always enough to stop critics from shaming nursing mothers.

Fortunately, Sloan received positive reactions from women who passed by with big smiles, she told Kennedy News & Media. Two men, who she assumes thought she was holding a bandage on herself, stopped to ask her if she was OK, "but once they looked down and saw [her] pump they were like ‘Oh, okay!’” she added.

“I hope that it can encourage other women and mothers and really anyone who has a lot going on in their lives,” she said. “No matter what, if someone believes they can do something, they can make it happen because it is possible.”

More on moms who play sports: