Through A Gender Lens: Evaluating Candidates Clinton And Sanders

We normally confine ourselves to the world of work at Fairygodboss, but this week we learned that our friends at Buy Up Index had published an infographic about how the Democratic contenders for the U.S. Presidency fared when it came to women on their own staff and other issues that might interest female voters. So, in a sense it is about work -- who does the work when it comes to running for President? Is it men or women?

The below post was originally published on the BuyUp Index blog. Visit the site to see the full info-graphic and which candidate has more female staffers, female donors, their positions on a variety of issues affecting women and even how their advertising imagery portrays women. 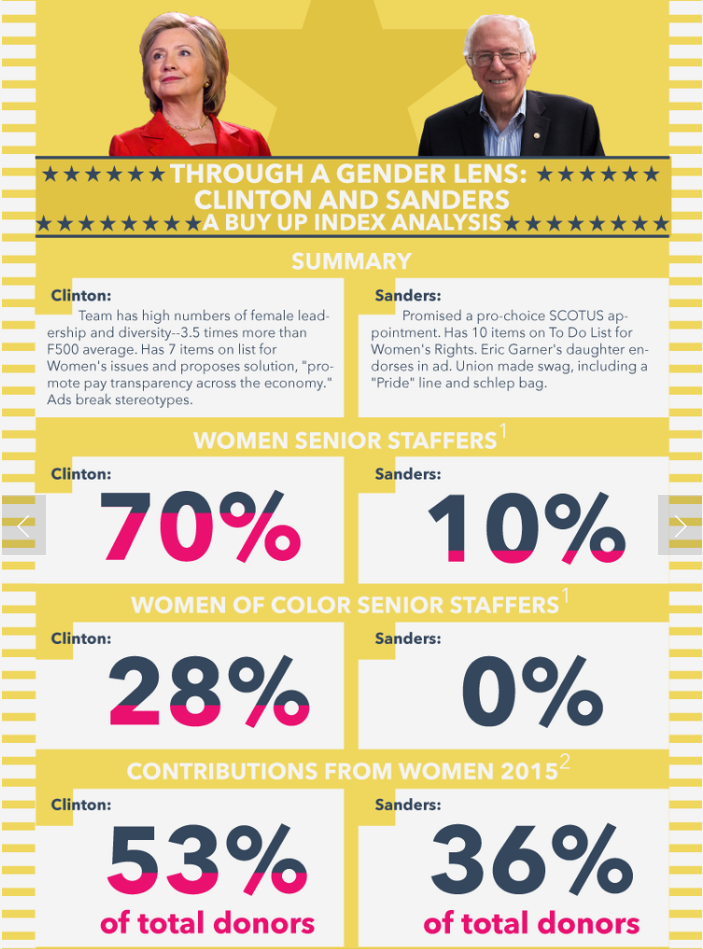 Whether you’re choosing a candidate or a can of beans, you might want more information before making a final decision. If you’re a woman or someone who believes in a gender equal world, you might want to know how the candidate, or the company that packages the beans, serves women.

Buy Up Index primarily rates companies’ commitment to gender equality. But the tool might also help people choose politicians by applying a gender lens to their campaigns. Below is a comparison of the two Democratic contenders, using a gender lens.

When evaluating companies, Buy Up Index collects information on leadership, employee policies, marketing, and philanthropy; however, an election campaign doesn’t disclose employment policies -- indeed, it may not last long enough to have any -- nor can campaigns do philanthropy while they compete for their candidate. That leaves just leadership numbers and marketing to evaluate. Other gendered aspects of a campaign that can be counted are supporters, funds, and campaign promises. So we counted them.

The methodology used here is adapted from Buy Up Index; we don’t give the normal Buy Up Index grade for leadership, as it includes two data points not available for campaigns-- leadership programs for women and total management numbers: leadership numbers can be compared with the Fortune 500 Average (14% Executives and 17% Board Membership).

National campaign staffers with titles of Director or above were chosen to compare with those levels of seniority, and only people directly employed by the campaign, not consultants, were counted. The number of Senior Staffers who are people of color is also noted, since both candidates talk about intersectionality. It should be noted that the two campaign staffs differ greatly in size.

Ads are rated A, B, or C: in the commercial Buy UP Index, if any of a brand's imagery breaks a gender stereotype, it receives an A. Neutral imagery gets a B, and any ads that depict violence or objectify either gender fails (defined by showing a body part not connected to the product or inappropriate clothing -- i.e., a bikini at a grocery store).