Mystery Woman
Tell us more for better jobs, advice
and connections
YOUR GROUPS
Discover and join groups with like-minded women who share your interests, profession, and lifestyle.
COMPANIES YOU FOLLOW
Get alerted when there are new employee reviews.
YOUR JOB ALERTS
Get notified when new jobs are posted.
Oh Baby Baby

Meghan Markle is going to be a mom, and of course, the internet is pretty excited. The Duchess of Sussex has been a royal family fan favorite since she married Prince Harry. As a biracial American actress and divorcee, she is redefining  what it means to be a British royal.

We all already thought that Meghan has superpowers. I mean, how can one woman break all those barriers while pulling off all that Givenchy. But Twitter thinks her baby is going to be a real superhuman. And not just because Meghan moved to a new country, planned one of the most watched weddings ever, dealt with her insane family, met (and impressed!) the queen, and wrote a NYT bestselling book and a cookbook all in the last year.

No, no, no. Her child is going to have LITERAL superpowers. And according to writer Charlotte Clymer, it's going to save the world.

The activist mused that Meghan's baby will be eligible for the throne AND the presidency.

Which is obviously an access to power only matched by Daenerys Stormborn of the House Targaryen, First of Her Name, the Unburnt, Queen of the Andals and the First Men, Khaleesi of the Great Grass Sea, Breaker of Chains, and Mother of Dragons. 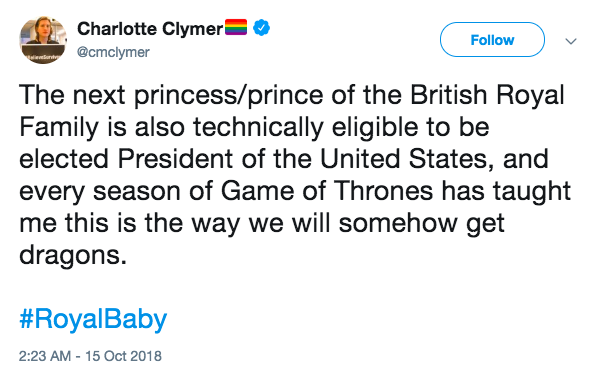 Especially because it means being saved by a baby AND dragons.

Because it's 2018, and that's what we do on the internet now. Just ask Facebook. 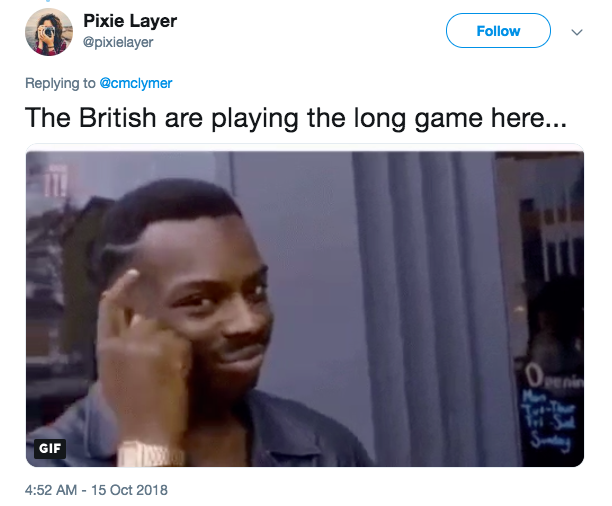 I'm just excited to see everyone happy about something for once. The internet can be a sad place. Congrats to Meghan Markle and Prince Harry!

Meghan Markle's Dog is Now an Entrepreneur, So You Have No Excuses