Mystery Woman
Tell us more for better jobs, advice
and connections
YOUR GROUPS
Discover and join groups with like-minded women who share your interests, profession, and lifestyle.
COMPANIES YOU FOLLOW
Get alerted when there are new employee reviews.
YOUR JOB ALERTS
Get notified when new jobs are posted.
Chronic Illnesses
I’ve Battled Migraines For Years — Here Are 3 Ways I Keep Them From Holding Back My Career
Photo courtesy of Nicole Lapin
AnnaMarie Houlis

Nicole Lapin has worked in television since she was 15, and it was at the ripe age of 18 that she was offered a job as a business reporter when, she says, she'd faked it until she made it. And she most certainly made it! But it hasn't all been easy.

Today, the former CNBC news anchor is a New York Times best-selling author of "Boss Bitch" and "Becoming Superwoman," as well as a career coach helping women pursue their own career goals. But Lapin has been living with migraines for nearly a decade since her mid-20s.

As an on-air CNBC TV anchor, the long days under hot, bright studio lights made her career an especially difficult one for her. The lights occasionally triggered her migraine symptoms and, while she managed to power-through, it took a toll on her health. 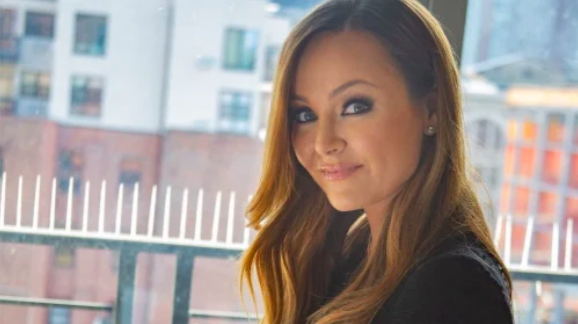 "Dealing with migraines, I'd feel nauseated and I'd feel pressure around my head and my face," she says. "I remember one time that I was recording major breaking news that required me to be on the air for hours and hours, and I was experiencing a migraine that day. I'd sneak off any time I could to go into the dark confines of my wardrobe room to try and rest."

Because migraines aren't visible, no one really knew about Lapin's struggle. And it wasn't until recently that she decided to speak up about living with a chronic illness like migraines.

Lapin isn't alone — 1 in 5 women in the U.S. suffer from migraines, adding an obstacle to their ability to pursue career goals.

In fact, women make up 85% of all migraine sufferers — making this a distinctly gendered illness — and they're likelier to miss work because of it. According to a new study by Cove, a migraine treatment platform, 157 million sick days a year in the United States are attributed to migraine headaches. That's because 90% of  sufferers say they can't function normally during a migraine attack, which can last anywhere between four and 72 hours, according to the American Migraine Foundation.

As a result, 47% of people with migraines feel it has held them back from advancing their career. That's about 10% of the female workforce who worry that their invisible chronic illness is just one more barrier for them.

We caught up with Lapin to hear her top tips for coping with migraines in the workplace — and advancing despite of them. Here's what she had to say.

1. Be open with your colleagues and managers about your migraine experience.

The first step is to be open about the fact that you do indeed suffer from a chronic illness. You have migraines, and others should be aware of that so that they can support you.

"I've been really lucky, as I've always had supportive managers and coworkers, but I certainly feel like I've missed a lot of work because of my migraines," Lapin says. "The more vocal we are, the more people will recognize migraines as a disease."

2. Educate those who don't understand the severity of migraines.

Migraines are too often misunderstood.

"A lot of time, folks will say, 'Just drink water — you'll be fine!' but it's like, no, no, this is more than just that," Lapin says. "It's important to have an open and honest talk, especially with your manager and others."

Lapin says that the more you share what you're going through, the more educated and supportive others will be. Because popping an Ibuprofen or drinking some more water don't do the trick.

3. Remember that you're not alone in your struggle.

"We're all struggling with something," Lapin says.

You're not alone, so do your best to stay optimistic. Lapin recommends exploring treatment options and using the migraine-free days to consider your career goals and actionable ways to achieve them.

"For people who now have more time and they're looking to re-enter the workforce or for people who are just looking at career options moving forward, really focus on the new things you can do with fewer migraines," she says.

85
03/02/20 at 3:15AM UTC
I agree with #1. Working in an open plan office, my colleagues are aware whenever I get a migraine episode. I would normally move to one of the allocated 'quiet' rooms, to rest or just get away from the normal noise level which affects me more when I have migraines. I keep a pack of migraine medication and anti-nausea pills in my desk. At times, when the migraines are so severe and I'm unable to function, my manager would advise that go home or take the Uber. One time, I even had a colleague drove me home. The point here is that when migraine strikes while you are at work, take all the necessary precaution. Be prepared - migraines can strike you anytime, anywhere.
Lisa A Huntley

41
IT PM; BI; operational analysis
03/01/20 at 4:33PM UTC
I never had 'migraines' until I had a carotid artery dissection that damages my facial nerves (in 2016). I now get 'migraines' (technically 'thunderclap' headaches) almost daily, sometimes several times, and the record is 9 days solid. I also work at and live near a landfill. A composter and gassification plant are also nearby. Odors exacerbate headaches. Here is what has helped me: My neurologist and family doctor communicate and both fill out FMLA forms allowing me to miss work or telecommute as needed for migraine. Of course, living so close to work, the smell can still be a problem but at least I can lie down for a bit. As an accommodation, my work purchased a nice HEPA filter in my office, so my little area is usually OK (but I get headaches on the way into my office). I have found no effective medication- and have tried everything on the market! Caffeine helps a bit. Also, smelling coffee grounds when a headache is coming on or to offset other odors helps a bit. Finally, be sure your boss and any back-up staff know when you are 'out of commission' so they can help you and understand why you are not available. Main tip: GET FMLA!!!!
Heather Farrell

74
Global Program Manager for Fortune 500 company
02/28/20 at 7:41PM UTC
I've had chronic migraines since my early teens, so for 30ish years, for the last 11 years I've had daily migraines. Migraines can be debilitating if you let them. Don't let them win! Keep taking care of yourself and learning what you can do to prevent or at least minimize the pain. When the pain wins, let yourself be okay with that. If you have management that believes you are doing your best, they will always support you and your need to take care of yourself.

Personalize your jobs
Get recommendations for recent and relevant jobs.
Employer Reviews
Société Générale
4.0
Great work-life balance, strong commitment to D&I. Good...
HHS
4.0
Be aware that this is a place is only for you to get your...
Recent Content
5 Signs You Don't Actually Need to Make a Career Change, According to a 12-Year Executive Coach
I'm a Mindset Coach — Here's 1 Thing I Do Every Day to Fight Off Imposter Syndrome
3 Ways to Grow Your Resume Skills Without Worrying Your Boss You’re Going to Quit