Mystery Woman
Tell us more for better jobs, advice
and connections
YOUR GROUPS
Discover and join groups with like-minded women who share your interests, profession, and lifestyle.
COMPANIES YOU FOLLOW
Get alerted when there are new employee reviews.
YOUR JOB ALERTS
Get notified when new jobs are posted.
New Research

The number of aging workers in today’s workforce is on the rise. Data from AARP indicates that in 2018, workers over the age of 55 filled nearly half of new jobs, with many planning to continue their careers past the traditional age of retirement. In fact, as AARP reports, employees aged 65 and older make up the fastest growing segment of America’s workforce today.

Yet, despite this trend, ageist workplace practices persist. From biased assumptions around skill sets and relevancy to a looming sense of job insecurity, today’s late-career professionals face a unique set of obstacles rooted in age discrimination. And, as new research from Fairygodboss shows, the onset of ageism may start sooner than you’d think.

Download the full report on Ageism in the Workplace

In a survey of 1,000 people over the age of 40, Fairygodboss found that just over 1 in 3 respondents (37%) who report experiencing workplace ageism say they were younger than 45 the first time it happened. Most of these respondents (62%) say this first brush occured when they were at a mid-level position in their career. 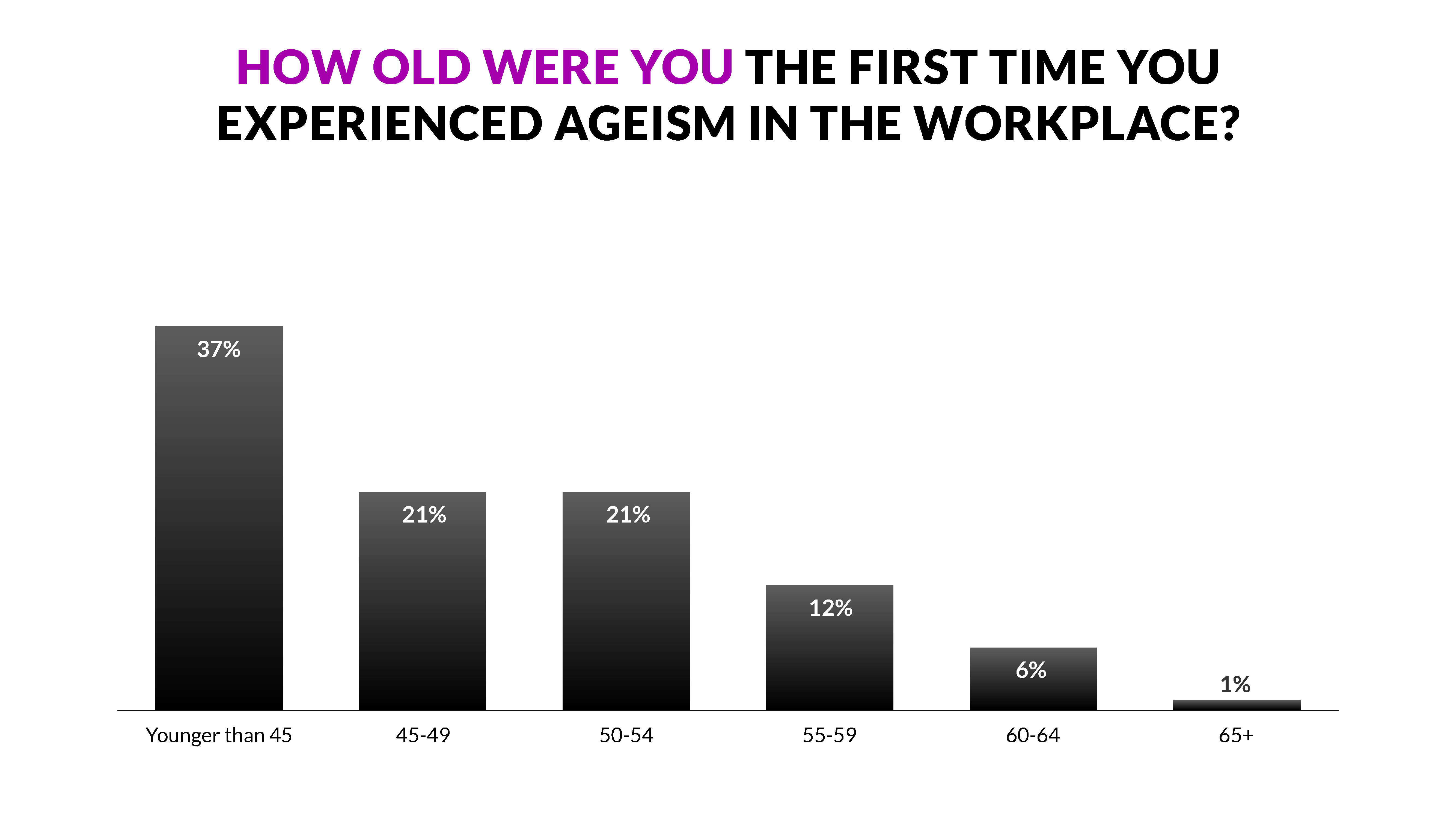 Interestingly, women and men report experiencing ageism in near-equal measure, with 30% of male respondents saying they’ve experienced it and 27% of female respondents saying the same. The most common form of ageism reported was receiving a negative age-based remark from a coworker, closely followed by respondents’ belief that they were passed over for a job due to their age. Thirty-two percent of respondents also shared they’ve been told they may be “overqualified” for a job after applying, and 19% said an interviewer has asked about their age. 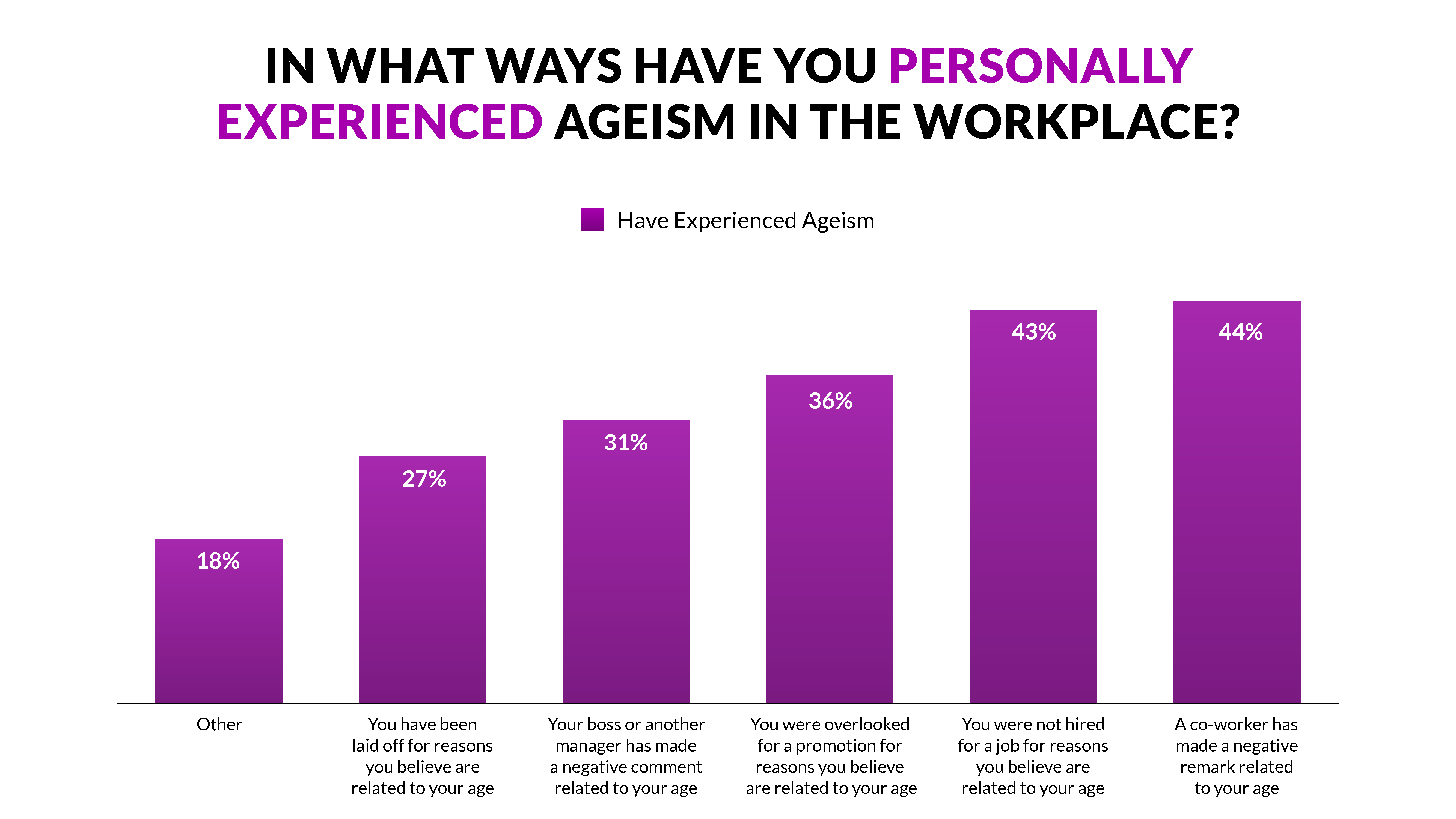 Respondents who’ve experienced workplace ageism are 3.6x more likely to fear being pushed out of work because of their age, as compared to those who haven’t experienced this form of discrimination. Meanwhile, over half of respondents said they believe it will be difficult to keep their job or find a new job between the ages of 50 and 64.

Ultimately, to put an end to ageist practices and belief systems in the workplace, greater alignment on the true value of age-diverse workforces is needed. Take, for instance, our finding that less than half of respondents who haven’t faced workplace ageism believe age diversity makes teams more productive. In contrast, 65% of respondents who have experienced ageism believe older workers contribute unique value to the productivity of a team.

As with other forms of discrimination, communication around unconscious bias and the harm that comes from assigning an employee’s value to their age (or gender, or race, or any identity attribute) is clearly needed. Perhaps that’s why 57% of survey respondents believe employers should offer additional learning opportunities to all employees to combat ageism, with a similar majority stating employers should ensure they avoid discriminatory interview questions, too. For more recommendations on how employers can address ageism in their organization, download the full report.

Personalize your jobs
Get recommendations for recent and relevant jobs.
Employer Reviews
UKG
4.7
The company is taking strides, daily, to be an employer of...
XPO Logistics
3.8
So many wonderful women in leadership roles and all are...
Recent Content
How to Manage Ageism in a Job Search
I'm a Career Strategist — Here's 5 Subtle Signs it's Time to Consider Changing Careers
Do These 3 Things Before You Start a New Job to Set Yourself Up for Success