Just last month, comedian Amy Schumer announced she was pregnant with her first child with husband Chris Fischer. Since then, she's updated fans on her experiences, especially her struggles with nausea. Sadly, her problems with morning sickness have not improved. On Friday, Amy revealed on Instagram that she had been hospitalized for extreme morning sickness, and had to cancel some of her shows as a result. 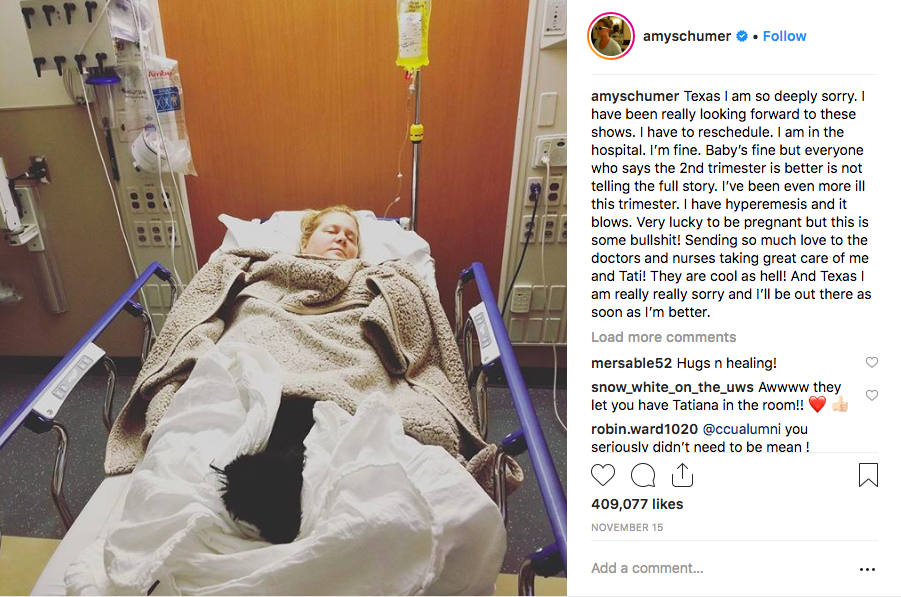 In the post, she included a photo of herself asleep in a hospital bed, with a heavy blanket on top of her. Updating her fans on her condition, she wrote, "I'm fine. [The] baby's fine, but everyone who says the second trimester is better is not telling the full story. I've been even more ill this trimester. I have hyperemesis, and it blows. [I'm] very lucky to be pregnant, but this is some bullshit!"

Hyperemesis gravidarum, or extreme morning sickness, is a condition characterized by a more severe period of nausea and vomiting than is typically experienced by most pregnant women. As if morning sickness weren't awful enough, women with hyperemesis can become so ill that they find it difficult to eat or drink, putting them at risk for dehydration, malnutrition and weight loss. Some cases even require a hospital stay.

Reacting to Amy's post, fans took to the comments section to wish her well or to share their own stories of dealing with the condition. One user wrote, "I had to take Zofran for both pregnancies ... I get it. There is no worse feeling. Ugh! Hopefully they’ll give you something that can help you throughout." Another commented, "It is the worst. I became depressed after having nausea and vomiting 24/7 for months. Having my male OB tell me it will be better soon was so unhelpful. It wasn’t morning sickness; it was morning noon and night misery. Hang in there. I survived it twice."

As the comments in the Instagram post suggest, countless women have been where Amy is now, doing everything they can to push through the complications of pregnancy. But sometimes you have no choice in the matter. Amy recovered soon enough to continue with her tour over the weekend, reminding all of us that there's very little that can keep a working woman down.

1 Comment
Browse recent articles
I'm a Career Coach — Here are 10 Ways to Cope with Interview Nerves
I Pivoted From a High School Teacher to a Director of Innovation and Architecture: Here’s How!
Only 63% of Women Report Feeling Mentally Healthy at Work — Here’s How Benefits Can Change That
Here are 5 Strategies Companies Can Implement for a More Inclusive Hiring Process
5 Impactful Steps You Can Take to Become a Better Ally in the Workplace
Be Open Minded, Ask Questions, & Find a Company that Encourages Growth: From a Young Professional
See more
Achieve your career goals.
Be part of the largest online career community for women to find jobs, advice, and support — for free.