We all know that women are judged much more harshly than men. We're alway too loud or too quiet, too reserved or too domineering, too nice or too cold. But really, mothers are judged even more harshly than any of us. There's this idea floating around that there is one perfect type of mother. But the funny thing is, she's just an idea. She doesn't' actually exist, yet women are consistently comparing themselves — and each other — to her. This breeds mom shaming, the internet's favorite way to rob women of their right to be individuals who make individual choices.

The latest celebrity to fall victim to mom shaming? Carrie Underwood. And the country star is probably the best example ever of how ridiculous mom shaming is. 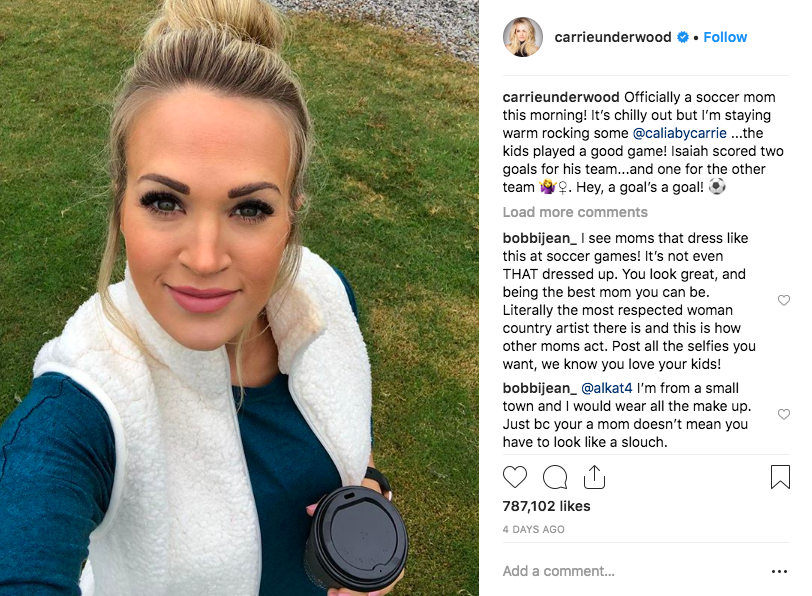 Commenters insinuated that she was putting other moms down by putting on mascara.

"Well that is a crap ton of makeup for a soccer game," one commenter wrote, according to Yahoo!. "Show up like most soccer moms, messy hair don't care, no makeup and a coffee mug in hand," another added.

Others had the audacity to theorize that the star got plastic surgery.

"I love Carrie. But it looks like she's starting the injections and face changing tweaks way too soon. She's looking a little plastic these days," wrote one of the many commenters suggesting Underwood got lip injections, microbladed her eyebrows, or "fixed her nose."

But the most ridiculous accusation was that she somehow doesn't care about her son because she posted a selfie.

Of course, this boils down to the belief that the ideal mother cares only about her kids, all day and every day. She makes no time for her own appearance, her own autonomy, or her own life.

And to be quite honest, that's internalized misogyny speaking. Women are allowed to make personal choices like whether or not to curl their hair, and they should be able to do that without criticism.

Because think about it: if we criticize a mother this badly for drawing on her eyebrows, how horribly are we criticizing mothers for "bigger" individual choices that affect her ability to operate in our society, like continuing to work after having kids?

Working moms already know the answer to that question. The criticism is pretty bad. And it's affecting women's parity in the workplace. In order to alleviate this pressure, we need to stop mom shaming at every level — whether it's criticism of the baby stroller you use or the nanny you choose.

Thankfully, supportive moms chimed in to support the country star.

They reminded her that she's allowed to do whatever she wants.

"I see moms that dress like this at soccer games!," wrote one commenter. "You look great, and [you're] being the best mom you can be. Literally the most respected woman country artist there is and this is how other moms act? Post all the selfies you want, we know you love your kids!

Now that's the kind of women supporting women we all want to see.

6 Comments
Browse recent articles
Are You Feeling Unheard on Slack? Here are 5 Ways to Amplify Your Voice
2 Leaders Share How They’ve Progressed Their Careers as Women in Tech
How to Unleash Your Superpower by Embracing Your Authentic Leadership Style
4 Ways to Work Through Guilt About Leaving a Role — According to a Career Strategist
3 Reasons Why Women Are Losing Out on Promotions During the Pandemic
A Tech Leader’s Top 4 Tips for Inspiring Remote Teams
See more
Achieve your career goals.
Be part of the largest online career community for women to find jobs, advice, and support — for free.