If ’90s supermodel Cindy Crawford could ensure her 15-year-old daughter, Kaia Gerber, would take away one lesson from her career, it would be this:

"My mom always just told me to stay true to myself and be myself, and I think people don't remind girls that enough," Crawford told E! News on Wednesday. "I think people might try to change themselves a lot in this industry."

Crawford’s simple yet solid advice is especially relevant given the rise of something people are nowadays dubbing Imposter Syndrome, or an overwhelming sense of self doubt often propelled by comparing oneself to others. (At its core, it’s really just another term for an inferiority complex — but these things sound so much more compelling with new and fancy names, don’t they?)

In all seriousness, though, we do know that the nagging, perceived need to change oneself in order to better meet others’ approval is something largely experienced by women, especially young women. The psychological reasons behind this are manifold, but stacks of research exist to support that at its essence, this sense of inferiority comes from women being plied with the message they’re “not enough” since girlhood. 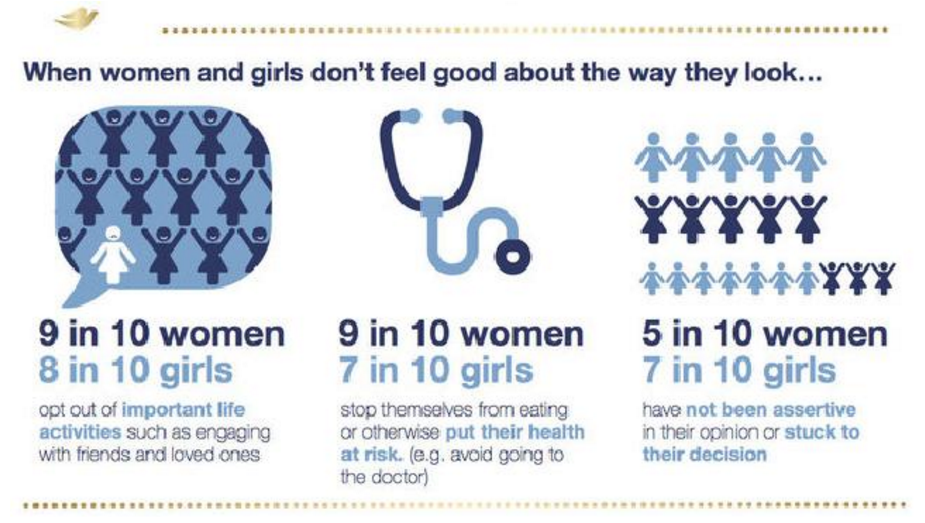 As the Dove Self-Esteem Fund found in their 2008 report “Real Girls, Real Pressure: A National Report on the State of Self-Esteem,” for instance, as many as seven in 10 girls between the ages of 8 and 17 believe “they are not good enough or do not measure up in some way, including their looks, performance in school and relationships with family and friends.”

A more recent iteration of Dove’s annual report, published in 2016 and focusing on women in Australia, found that these feelings of inadequacy hardly go away upon reaching adulthood; in that survey, four out of five women reported having low self esteem, and of those four in five, nearly all (89 percent) said their insecurities drive them to opt out of important activities and life events.

So, what does all this have to do with women’s career prospects? Unfortunately, a lot.

One study, published in the 2016 Journal of Personality and Social Psychology and conducted over an eight-year span, assessed the average self-esteem rates in 48 countries and found there to be a sizable difference in the confidence levels of men and women, something they termed the “confidence gap.” And that gap is absolutely having an impact on women professionally. As synopsized to Forbes by Judith Beck, CEO of Financial Executive Women, it means that “women are less likely to take a risk on their career (and) over time they end up missing out on opportunities.”

Where Crawford’s lookalike daughter is concerned, some might assume her burgeoning modelling career isn’t at risk of being impeded by a confidence gap anytime soon. Recently booked as the new face of Marc Jacob’s Daisy fragrance, Gerber is everything the media and fashion world like to uphold as the standard all women should conform to — thin, tall, and traditionally beautiful (not to mention white and cis-gendered).

It’s important to remember, though, that in this society, no woman is truly exempt from that ubiquitous “not good enough” message. And learning ways to preserve and protect our self esteem is crucial not only to our mental health, but to our careers, too.