High Heels, Female Pilots And The Uniforms Of Our Jobs

Last week, a temporary worker named Nicola Thorp was sent home for not wearing high heels at PwC. Thorp, 27, was staffed to work at PwC and was sent there by a Portico, a staffing agency for whom she had signed an agreement that included “appearance guidelines.” After Thorp refused to buy a pair of 2-4 inch heels as directed by her supervisor, she was told to go home without pay.

Thorp posted a petition entitled “Make it illegal for a company to require women to wear high heels at work” was posted last Tuesday night and by Thursday afternoon had passed the 100,000 signature mark required to trigger a debate by the U.K. government. As of this writing, the petition has gathered over 136,000 signatures. The U.K. Parliament now has a few days to set a debate date on the issue of whether it is outdated and should be illegal to require that women wear high heel shoes instead of flat, formal shoes at work.

Meanwhile, in the U.S., it appears that the law is on women’s side when it comes to having a choice about footwear. According to a statement by the Equal Employer Opportunity Commission to the Huffington Post, “Employers may not require certain types of dress based on gender stereotypes…This could be sex discrimination.” Moreover, one British woman observes that it is no different than forcing men to wear suits, which is part of the uniform of many professional workplaces in the U.K.

Other women acknowledge the reality that high heels can help women get ahead in their jobs. The good news is that based on a casual Twitter poll by journalist Emily Peck, the vast majority of women do not feel like they have to wear high-heel shoes to work. 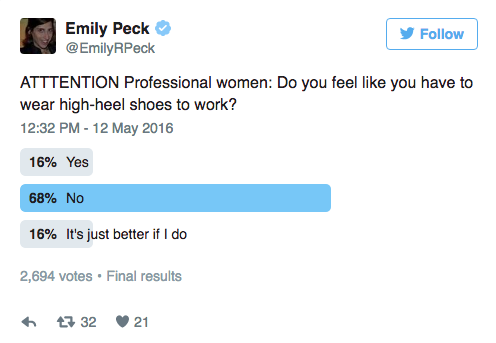 One industry where high heels are still literally “part of the uniform” is the airline industry. Last summer, El Al airline made headlines for requiring that all female fight attendants must wear high heels until all travelers are boarded and seated on the plane. Last week, a lawsuit by female pilots was lodged against Frontier Airlines. The American Civil Liberties Union filed formal complaints with the Equal Employer Opportunity Commission alleging that the company’s policies on pregnancy and nursing fail to accommodate breastfeeding requirements mandated by law.

If you’ve ever been a frequent flier during pregnancy, you probably know that women who are near their estimated due date are not allowed to fly without a doctor’s note and similarly, female pilots are required to take unpaid time off before their babies arrive. Instead, the plaintiffs in the case say they were forced to take 8-10 weeks of unpaid time off with no temporary work reassignments during this time. Moreover, they say that the airline did not give them a designated breastfeeding location on the aircraft or at the airport.

One of the plaintiffs, Erin Zielinski told CNN: “I love my job as a pilot so much, except for this issue. We don’t want future moms to have to go through this. We want a better policy for everyone going forward. There are more and more female pilots being hired…We don’t want anyone to have to choose between flying and breastfeeding.”

Frontier Airlines denied the claims and asserted that their policies and practices complied with federal and state laws, as well as the terms of the collective bargaining agreement between them and the airline pilots. The transportation industry is not an easy one for women, according to the women in our community. In fact, it ranks as one of the the lowest ranking industries on our site, in terms of female job satisfaction, along with aerospace and pharmaceuticals.