Mystery Woman
Tell us more for better jobs, advice
and connections
YOUR GROUPS
Discover and join groups with like-minded women who share your interests, profession, and lifestyle.
COMPANIES YOU FOLLOW
Get alerted when there are new employee reviews.
YOUR JOB ALERTS
Get notified when new jobs are posted.
Fun + Feminist

Step Aside, Astrology — This Personality Test Has a Feminist History We Love

At some point, a friend has undoubtedly asked you over a happy hour drink: what’s your Myers-Briggs type?

Since it was published in 1962, the Myers-Briggs Type Indicator has become one of the world’s most popular personality assessment tests, with about two million people taking it annually. Consisting of 93 questions, the test places takers on a spectrum of 16 different possible personality combinations derived from the teachings of Carl Jung. But although the inspiration for these personality types may come from a male psychologist, the true history of the Myers-Briggs test is an incredibly feminist one.

The brains behind this popular personality test are, in fact, a mother-daughter team: Katherine Cook Briggs and Isabel Briggs Myers. Both were deeply interested in psychology and especially in the teachings of Jung, despite not having a formal education in the field. In 1917, Katherine first began developing her own typology of personality types. But it wasn’t until the advent of World War II that she and her daughter realized there was a practical need for their theories.

With droves of women entering the workforce for the first time, the mom-daughter team believed these women could benefit from a deeper knowledge of their own personality-based preferences to identify the jobs that would best suit them. The template they settled on — which was widely published years later, thanks to the efforts of Isabel — became the Myers-Briggs test we know today.

As if the test's origins weren't already relevant to women in the workforce, the Myers-Briggs test is still widely used to inform career path choices today. Read more about the different MBTI types — and the best career paths for each — below. 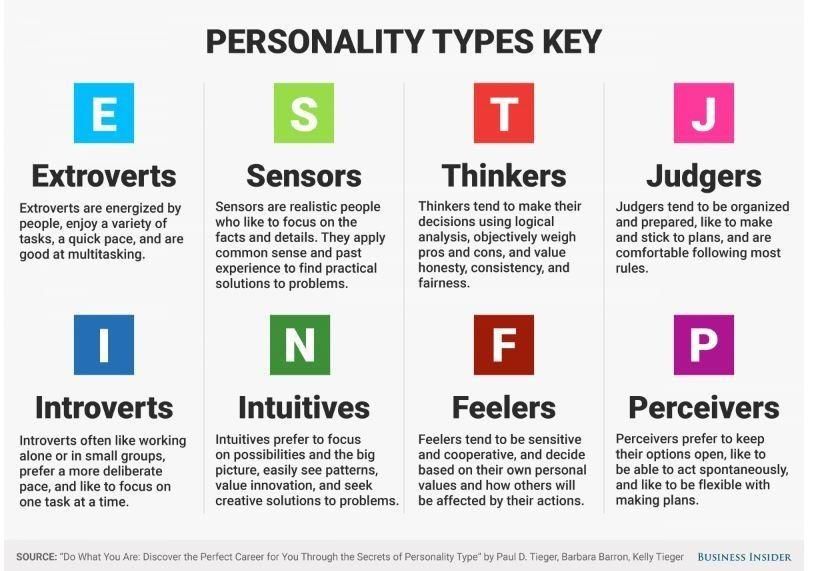