Mystery Woman
Tell us more for better jobs, advice
and connections
YOUR GROUPS
Discover and join groups with like-minded women who share your interests, profession, and lifestyle.
COMPANIES YOU FOLLOW
Get alerted when there are new employee reviews.
YOUR JOB ALERTS
Get notified when new jobs are posted.
Not OK

‘We Were Let Go on a 7-Minute Zoom’: Companies Can’t Use COVID As an Excuse for Inhumane Layoffs

As the world is adapting to what is now the “new normal,” Fairygodboss wants to be there for you every step of the way. Keep reading for timely advice and join our Navigating the New Normal group for continued support.

Earlier this week, Airbnb made headlines when announcing on May 5th that it had laid off 25% of its workers. Like countless other companies, the economic impacts of COVID have hit the online marketplace for tourism hard. Unlike other companies, though, news of Airbnb’s workforce reduction has centered largely around the company’s efforts to handle those layoffs as humanely as possible.

“Today, I must confirm that we are reducing the size of the Airbnb workforce,” reads the now-viral message sent by Airbnb’s Co-founder and CEO, Brian Chesky. “We will have to part with teammates that we love and value… To take care of those that are leaving, we have looked across severance, equity, healthcare, and job support and done our best to treat everyone in a compassionate and thoughtful way.”

The company’s outgoing employees, according to Chesky’s message, will receive 14 weeks of severance, with an extra week for every year spent at the company. Additionally, Airbnb will continue to provide health insurance for a full year, is gifting workers with their company laptops, and has even transitioned much of its internal recruiting team into an “Alumni Placement Team” dedicated to helping former workers find new jobs.

It’s an impressive showing of what it means to humanely conduct a business, even in the face of astronomical damage to one’s bottom line (revenue for 2020, Chesky said, is projected to bring in less than half of last year’s earnings). And unfortunately, compared to the experiences of many of the other 30 million U.S. workers who have lost jobs during the pandemic, Airbnb’s approach to layoffs is a rare one.

Since the start of COVID, workers have reported being let go from jobs in ways that feel totally heartless. 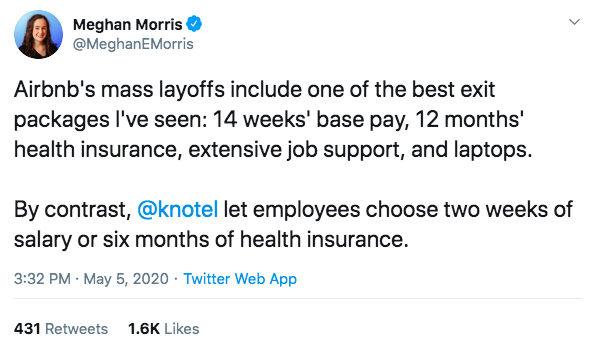 Some laid-off workers say they’ve been forced to choose between benefits that should, in theory, be a standard part of any severance package — but even more so when that package is being issued in the middle of a global pandemic. Others say the manner in which they were laid off was insensitive at best, downright cruel at worst. At Bird — the scooter-sharing startup founded by Travis VanderZanden, a former Uber exec — for instance, an outgoing worker compared the company’s 30% workforce reduction to a “Black Mirror” episode.

"It might as well have been a recording, given the lack of human interaction,” one staffer told dot.LA. Others on the call insist the two-minute message informing workers they were being let go was a pre-recording, something Bird execs have denied. But according to dot.LA’s coverage, some people weren’t even able to hear the full two-minute message, as their work technology devices went dark before the call was even over.

The experience sounds not dissimilar from one shared with me by Anna*. She was laid off from a well-known tech company in New York at the start of April and calls the way in which she was let go "shocking," as well an “administrative and logistical mess.”

“We were let go on a seven-minute Zoom call.”

When Anna woke up to a calendar invite for an unexpected company Zoom meeting at 10 a.m. that day, she was nervous. But in the days leading up to this call, well after COVID shelter-in-place and work-from-home orders were underway, Anna says she and her colleagues were told “there would be no layoffs.” With reason to still feel hopeful, she joined the call — only to quickly learn through a short, one-sided conversation that her job had, indeed, been terminated.

“We were let go on a seven-minute Zoom call, and there was no opportunity to speak or ask questions,” Anna said. “At the end of the call, the HR rep said she was sorry but that she had to go because she had other layoffs to make. It gave me and many others the impression that we were only worth seven minutes of time, and that really hurt considering I had spent two years investing in the company.”

One of the most upsetting aspects, Anna added, was the omission of any severance information during the call. Instead, the HR rep purportedly told her and others that those details would come later in an email. With that, the call was over, Anna’s work technology was deactivated within 20 minutes, and she was left refreshing her personal email inbox, waiting for more information.

“When we did receive the severance email, it said we were only getting two weeks of pay, and that’s when I really went ballistic,” she recalled. “It was so insulting that, to be laid off during a pandemic, we were only receiving two weeks.”

Anna says that internal pressure from her still-employed colleagues ultimately led to a small increase in severance, but adds that this policy change, as well as the paperwork needed to enroll in Cobra insurance, was shared in an inconsistent and disorganized way: “That was really stressful for everybody, and made a difficult time even worse.”

Laying off workers is a move many companies, at some point, are forced to make. But there’s no excuse for layoffs to be inhumanely handled — especially right now.

For organizations that have no other option but to reduce their workforce, there is a way to lay off workers humanely, as Airbnb clearly demonstrated. But if providing the full extent of that company’s support isn’t possible, we heard from an HR consultant, Eric Mochnocz, about the proper steps organizations still can and should take. (In addition to providing as robust a severance package as possible and an extension to workers' health insurance, of course.)

1. Be prepared, and make it personal.

“Be as prepared as possible for layoff meetings, and have individual calls with the people you are laying off,” Mochnocz said. “A generic email is not a humane approach right now. Schedule a meeting over the phone or web call and provide the space and time for the laid-off individual to ask questions. Have resources available to share with them (how to apply for unemployment, what it means for their benefits, how they are supposed to return company assets, etc.). If possible, provide outplacement services — a trusted firm you engage with to help the employees land their next job.”

“Employers should make themselves available after the fact if laid-off employees have any questions,” he added. “They should maintain open communication channels as employees navigate unemployment and the job search process. Identifying one central contact person, who is a trusted member of the retained organization, is also a way to guarantee accessibility and clarity/consistency in communication.”

“If you are doing mass layoffs, like a number of organizations, managers and leaders are utilizing their LinkedIn networks to help connect laid-off employees with potential opportunities,” Mochnocz said. “Employees ‘opt-in’ to have their names included in the list of laid-off employees that is widely publicized across LinkedIn. Leaders and managers can also devote their time to writing recommendations and endorsing skills for laid-off employees through LinkedIn.”

Ultimately, Mochnocz warned companies that how they handle layoffs now could have major consequences for their longevity down the road: “If your company cares about optics and your ability to recruit talent after COVID-19, know that your reputation as an employer is deeply tied to how you treat your employees now.”

*Name was changed to protect identity

Personalize your jobs
Get recommendations for recent and relevant jobs.
Employer Reviews
Triax Metal Products
No ratings yet
Demand better pay. They allow you to work as much overtime...
University of Central Florida
3.0
I worked in the Marketing and Communications department...
Recent Content
Get Job Search Ready in 14 Days
‘What You Have to Say Matters’ — Finding My Voice While Growing a Career in Customer Care
My Career Journey: Solving NSA's Most Complex Cybersecurity Challenges, Rising to Leadership & More