Mystery Woman
Tell us more for better jobs, advice
and connections
YOUR GROUPS
Discover and join groups with like-minded women who share your interests, profession, and lifestyle.
COMPANIES YOU FOLLOW
Get alerted when there are new employee reviews.
YOUR JOB ALERTS
Get notified when new jobs are posted.
Recognize This

As a third-culture child who switched many zip codes, I’ve gotten used to being a misunderstood outsider everywhere I go. I have always attributed this to me being a foreigner, to me being younger, to me having a strong personality. In my mind, it was always my fault and my responsibility to get better, to become a stronger communicator, to speak more softly, to be less direct.

During my time in Brazil, I started noticing again and again that I would be called "aggressive" for expressing my professional opinions, while male colleagues who screamed and mistreated people were respected and excused for being "too passionate about their arguments." On the other hand, being sweet and accommodating was making me lose my differentiation as a strategic thinker and overall doubt my leadership skills. Surprisingly, I learned that many of my female friends who were intelligent and assertive were facing similar issues. It wasn't a "Miriam" problem. It was a cultural problem, well described in an HBR article about the likability tradeoff successful women face.

It took me a while to accept the fact that as a woman in a male-dominated environment I would be perceived differently by peers, subordinates and superiors, regardless of what I did. I then stopped trying to fit into behavioral patterns that contradicted my personality.

This is how I discovered what is commonly termed "Unconscious Bias" which is in more simple terms, the tendency of people (both men and women) to

These biases are everywhere: in job descriptions that represent masculine values, resume evaluations that rate those with male names higher than the same ones with female names, in performance reviews where high-achieving women are judged differently than high-achieving men. Women are also less likely to be mentored or sponsored (sometimes because male managers feel uncomfortable taking this role with a female subordinate). In a humorously titled article, Madam CEO, Get Me a Coffee, Wharton Professor Adam Grant and Facebook COO Sheryl Sandberg describe how women are often left with the larger share of office housework that takes away from their normal duties. Mothers (or mothers to be) are often subject to the pregnancy penalty on their compensation and promotion opportunities.

What's the Impact of All These Biases?

An interesting study by Google found that only 1% of bias in a company that recruits equal number of men and women at the entry level, will result in only 35% (aka 15% less) females in top leadership. This is a pretty big loss of talent in my books. Now imagine what would happen if this bias were 10-15%? 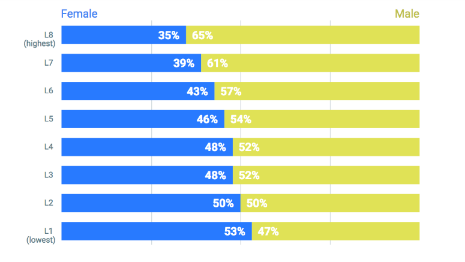 The World Economic Forum surveyed 350 Chief HR Officers across different industries and found that 44% of them thought that unconscious bias together with work-life balance were the leading barriers to achieving gender diversity in their company.

Most people are not trying to be sexist nor are aware that they perceive and treat women differently from men. Our expectations of women's roles in society changed greatly in the past 50 years and will continue to evolve. Our workplaces haven't been catching up as fast, unfortunately.

The great news is that awareness has been increasing steadily and more and more companies and individuals are interested in creating inclusive work environments and leadership teams that represent different backgrounds and experiences. There are several simple things you could start doing RIGHT NOW:

On an Individual Level

On a Company Level

Miriam Grobman is the Founder and CEO of Miriam Grobman Consulting, a firm that advises companies on advancing women's leadership through corporate strategy, organizational culture change and leadership development programs.  Miriam’s career has taken her across the globe, working with executives in the USA, Europe and Latin America across the banking, mining, technology and cosmetic industries. Miriam previously worked for brand names such as Deutsche Bank, Lloyds Bank, Coty and Vale SA. Miriam holds an MBA from the Wharton School and MA in International Studies from the Lauder Institute, as well as a BS in Computer Sciences and a BA in Economics from the University of Texas at Austin. She is also a Certified Organizational Culture Consultant from the Hofstede Centre in the Netherlands.
In her free time, Miriam also runs the Leadership and Women Community on Facebook, to share stories of inspirational women leaders and practical career advice for high-potential women.