Let's Stop Calling Meghan Markle An "Anti-Princess," Shall We?

Unless you’re reading this while stuck in a game of Jumanji with no other context for world goings on, chances are you’ve heard reference to a certain royal wedding. If you’re living stateside, perhaps you set your DVR to record the early morning nuptials; or maybe you needed to watch a royal wedding like you needed a proverbial kick to the head. Because, in the end, the fanfare is all pretty arbitrary, right?

Maybe, maybe not. Regardless of your attitude toward the Windsors, there’s no denying the social influence they wield. And, as the newest addition, Meghan Markle is primed to become arguably the most influential of the bunch. Already, people are jumping to dissect what she'll bring to the royal family’s scone-spotted table, and her Blackness has been a focal point of many of those conversations. Take, on the cringeworthy and troubling side of that dialogue, the assertion from Good Morning America that Markle’s engagement offers “hope” to Black women, for instance. 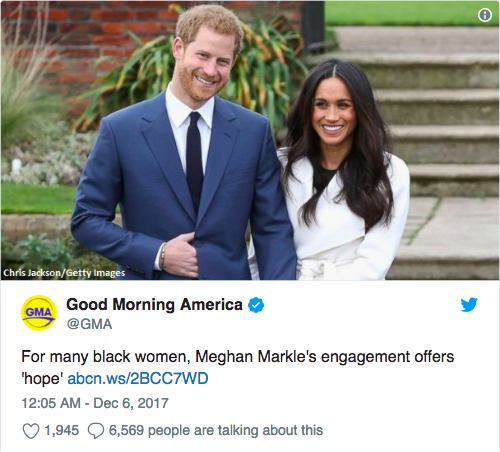 There’s a lot to unpack where Markle, society's approach to her, and her race is concerned, and I’ll leave it to women of color writers to do justice to the unpacking (like in this top-tier take from Jenee Osterheldt for the Kansas City Star). In the meantime, though, there’s another problematic spin on Markle that’s begun to circulate: the label of “Anti-Princess Princess.”

In a recent article, one writer spoke to the impact Markle has had on her personally. Growing up in Kentucky as a queer Arab girl, the author wrote, traditional princess lore wasn’t something she could find much by way of inspiration — not to mention representation — in. But now, the emergence of Markle is serving to “bridge a once-impassable mental chasm,” as she finds herself “rethinking her lifelong ambivalence toward princess culture.” Why? Because, as the writer asserts, “Meghan Markle is, as I see it, the anti-princess princess.”

On the one hand, I can certainly see where this writer is coming from. Coming from childhoods spent pelted with the Wonder Bread-whiteness of Disney princess culture, Markle is providing some vital, long-overdue representation within the echelons of the (homogenous, class-centric) royal family. And, yes, that does feel exceptional.

But the celebratory positioning of Markle as “anti” here is, alternately, *not* so great. It’s restricting, with an implied dichotomy of options for expressing womanhood that, in 2018, you’d really, really hope we were more readily moving past. Because in people’s clamor to celebrate Markle as falling outside the “usual” mold of princess-dom, it could be argued that just as limiting of a pedestal is being carved out for her as the traditional one. In other words, it should be impossible to be an "anti-princess" — because there's not one way to be a princess, or to be a femme-identifying person for that matter. (And, on a mostly related note — can we please stop equipping princesses, and the idea of what it means to be a princess, with so much cultural currency already?? Sheesh.)

Ultimately, this is a narrative that’s befallen women time and time again — that there’s only room for one desirable expression of womanhood at the top, thanks very much. And it only serves to perpetuate the “othering” of those not fitting within that expression, as well as to define the roles and qualities that are permissible for all. For some, Kate Middleton has proved a useful tool in highlighting this oppositional contrast. A recent Vox article delves into the two women’s differences, calling Middleton “anxiety-inducing” while deeming Markle to be “exciting.”

“When I see a woman who flouts royal protocol, who hugs strangers, who talks about her marriage like a partnership instead of a prize, who puts up with a publicly toxic extended family, I feel a sense of relief," the article's author writes. "This is a woman whose most famous style quirk is not Kate’s long, shiny, carefully blown-out hair but a scandalous messy bun. This is a woman whose (toxic-seeming) relatives publicly castigate her in the tabloids — something that would have been unthinkable during Middleton’s engagement — and who comes across all the more relatable for it.”

If celebrating Markle and the admirable, outspoken, professionally accomplished and consistently generous woman she *seems* to be can only be accomplished when couched within a framework that inherently limits and divides women, then that doesn't seem like much of a celebration, does it?

At least, not one I'll be attending.

3 Comments
Browse recent articles
The Dirty Dozen: The Worst Things You Can Put On a Resume In 2022
Don’t Be Afraid to Live, Dream and Pivot Your Career, According to a Senior People Business Partner
3 Reasons To Ask For a Promotion Prior to Labor Day — And How to Go About Doing So
Introducing Our New Head of Recruitment Marketing and Customer Success — Gabi Carachilo!
How Embracing Challenges Leads to a Dynamic Journey With Multiple Careers
Considering a Career Change? Use This 3 Step Guide to Make Sure You're Ready
See more
Achieve your career goals.
Be part of the largest online career community for women to find jobs, advice, and support — for free.