Cover letters play an immensely important role in the job application process. Your cover letter, after all, can more clearly and comprehensively explain all of the coveted information that's laid out on your resume in bullets and snippets. If a hiring manager is intrigued enough by your resume, chances are that they're going to turn to your cover letter to learn more — not just about your experiences, but also about how your experiences can specifically and uniquely help their team and overall company succeed.

Your cover letter can make or break your chances of getting that interview so, regardless of who reads it, you should always take it seriously.

What makes a great cover letter?

A great cover letter is one that compels the reader to reach out to you immediately because they want to talk more with you. Whether it's an in-person interview or a phone interview that your cover letter lands you, if it's written well, it'll work.

Here are five simple steps you should follow to make sure that your cover letter succeeds:

Now that you have the general gist of a great cover letter, here are 15 examples of awesome ones for you to reference the next time you are writing one of your own. All of these cover letters follow the five tips above, but let's dive into what they each do well... 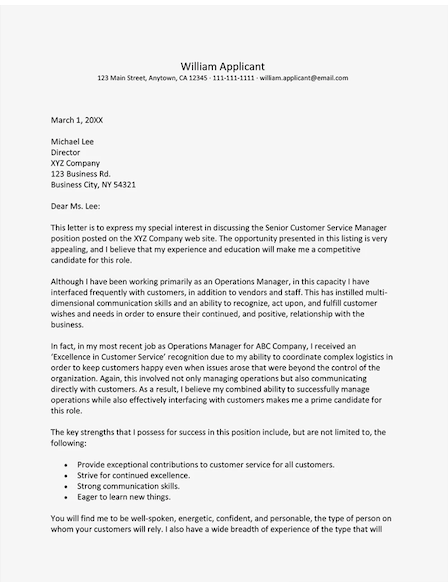 This cover letter is effective because the writer is proposing that they have a discussion about the job. They share their experiences and skills in a way that relates to the new career, even though it's an entirely different type of job. They also do so in a way that's clear, concise and easily digestible. For example, they use short sentences, quick paragraphs and bullet points. 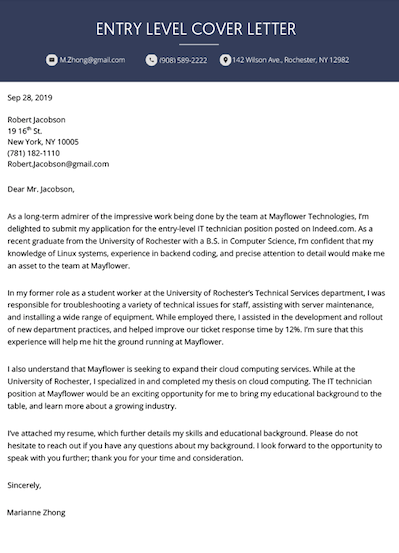 The entry-level cover letter is a tricky one because you may not have a whole lot to talk about just yet. That's why it's important to share a lot of passion and interest in an entry-level cover letter. A hiring manager is more likely to take a chance on someone who expresses a sincere interest in his or her company than they would on someone who sends a generic cover letter. This particular example opens with interest right off the back. The writer also explains how their educational background is applicable, and they have some work experience while in school that has set them up to take on bigger responsibilities. 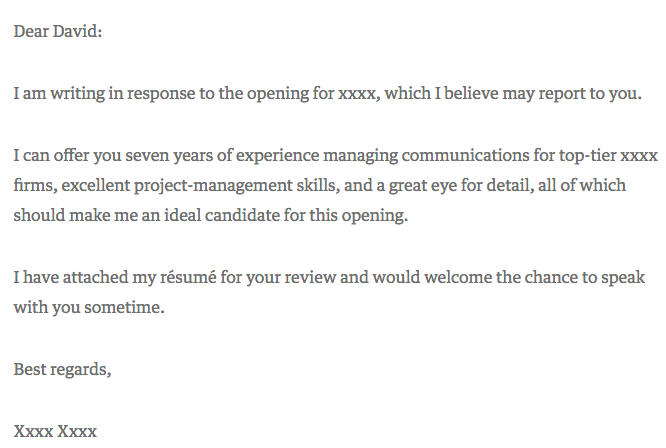 It's a bold move keeping your cover letter this short, but it can and just might work on the right hiring manager. In fact, back in 2009, David Silverman wrote an article for Harvard Business Review called "The Best Cover Letter I Ever Received." That letter was just this. It was short, sweet and to the point.

“The writer of this letter took the time to think through what would be relevant to me,” Silverman wrote. “Instead of scattering lots of facts in hopes that one was relevant, the candidate offered up an opinion as to which experiences I should focus on.” 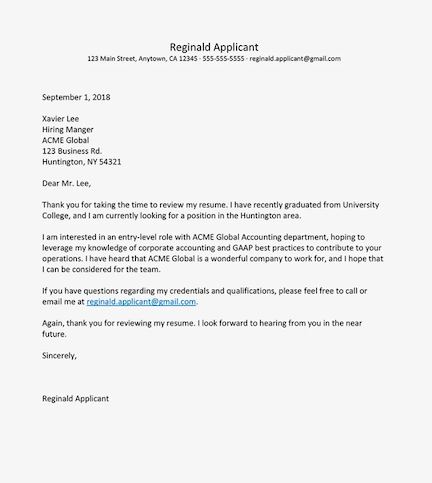 Sometimes, you have a company in mind for which you'd really love to work, but they're not necessarily hiring. So you send a cover letter and resume to inquire about their needs and gauge their interest nonetheless. This cover letter does a great job at explaining exactly why the writer is reaching out and what they hope to gain from the experience. They spell it all out for the reader who can then decide whether or not they're willing to talk more. It's simple and short, since the company doesn't have a specific job that they're advertising. And it thanks to reader for their time and consideration. 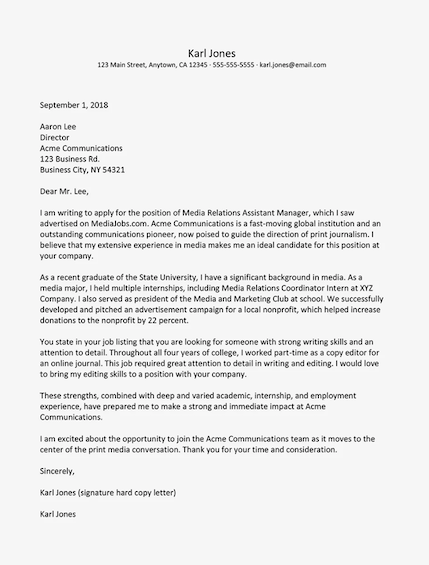 If you're a recent college graduate, chances are that you're looking to put what you've learned in school into practice (and get a job so you can pay off those student loans!). Writing a cover letter right out of college may take a little more creativity because you  may not have a whole lot of experience to talk about. You can, however, talk about your studies, internships, and other work opportunities you've had like this cover letter does.  This cover letter speaks with conviction, too. Notice how the last line expresses the writer's excitement to join the team and make an impact. The writer isn't asking for a chance; rather, they're sharing exactly why the reader should take the chance on them. 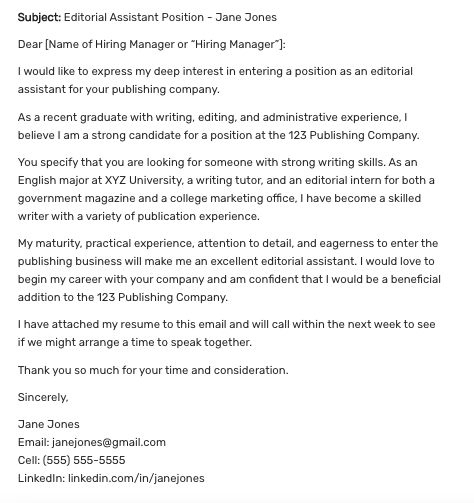 It's not always totally necessary to send a traditional cover letter in a separate document like a PDF. Sometimes, you can get away with just sending an email cover letter and attaching your resume and any other supporting documents. This email cover letter is a solid example because the subject line shares exactly what the email entails — with a name so that the recipient can easily search their inbox for it. It's short and to the point, and it shares that the resume is attached. 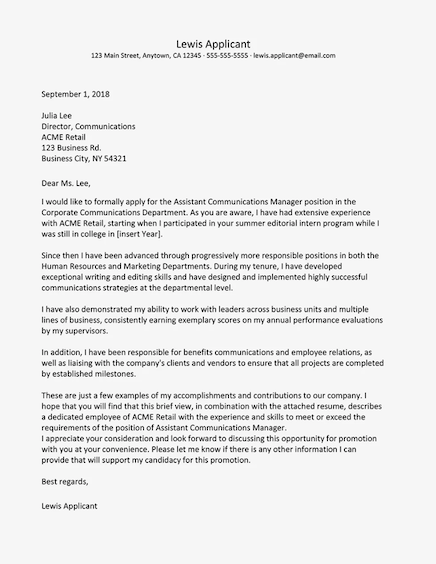 What if you're asking for a promotion or applying another job internally? If you're looking to make any kind of move within your company, you'll still have to write a cover letter to share why you deserve the promotion or higher position. This cover letter is done well because it states exactly what position the writer wants and explains, right from the start, why they should get it. They share not only specific experiences they've had within the company that set them up to be successful in the new role, but they also share the various ways in which they've demonstrated their skills. They conclude the cover letter by thanking the hiring manager for their consideration and noting that they're looking forward to the discussion — again, as if it's already set in stone. 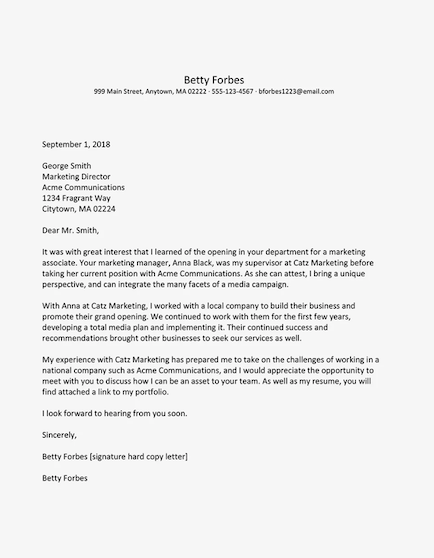 Having a connection to a company is a great way to  get a foot in the door. But you still have to put in the work to secure the position. If you have a direct contact to the company, you should share that in your cover letter — especially if they've referred you! This cover letter does it well right in the first few lines. If the hiring manager knows that you know and may have worked with someone who is already on their team, this could be a good sign that you might be a great cultural fit. Then it's up to you to share how your skills can also benefit the company, as this cover letter example goes on to do. 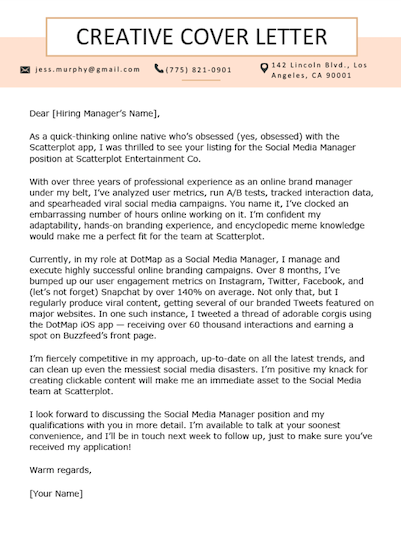 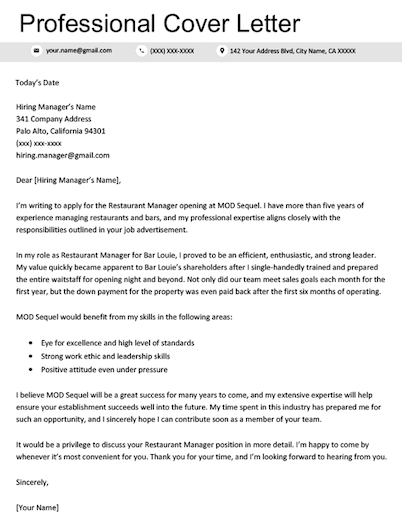 If you're applying for a management position, you'll need to be very clear about why this company or establishment should not only give you a chance but also why they should make you a leader. And, to do that, you'll need to show them that you're already a leader. Notice we said show. You need to show not tell. You can do this by illustrating specific experiences and sharing examples of how you were a leader in the past, like this cover letter does well. This cover letter also breaks it down simply with bullet points so all of the information is accessible instead of overwhelming. 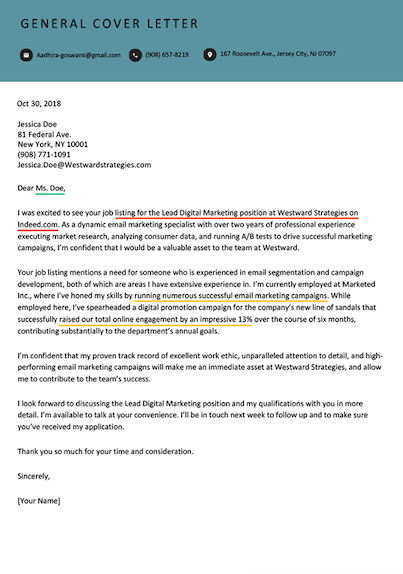 This a great general cover letter for a lot of reasons. For one, the paragraphs are short with short sentences, but it doesn't sacrifice detail. It shares the job for which the writer is applying — and where they learned about the job. It shares their experience with specific numbers and facts to back them up. And it shares why they think they're a great fit for that particular company. It's simple, but it's effective. 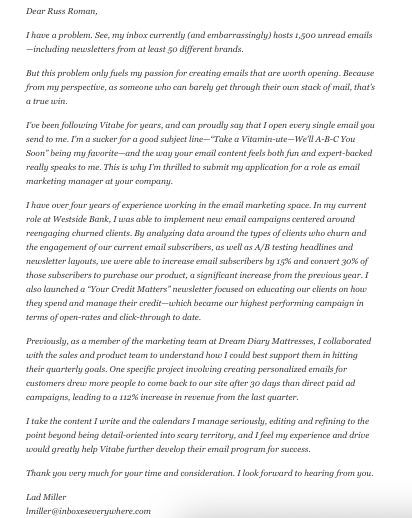 This cover letter is a wonderful example of the writer taking a bold stab at being personal. And it works! They took what the company is all about and shared how the company has helped them, personally. But they didn't just talk about how they've been a consumer of the company's product. They also talk about how they'd benefit the company as a team player who understands the target demographic (because they're it!). 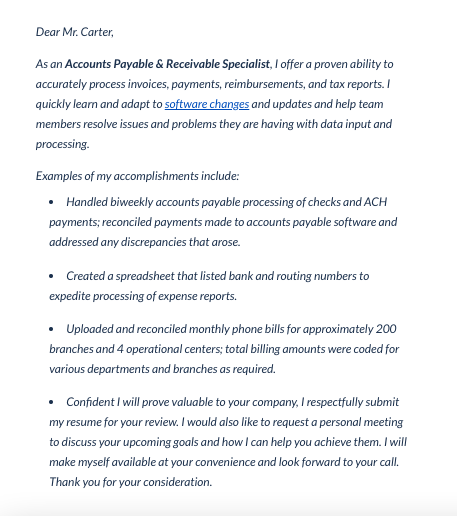 This professional cover letter is quick. It uses bullets to quickly outline examples of the writer's accomplishments. But it doesn't just list them like a resume. It takes the time to share some more specifics that wouldn't fit on the resume. It also closes by asking to meet — instead of waiting for the hiring manager to ask them. 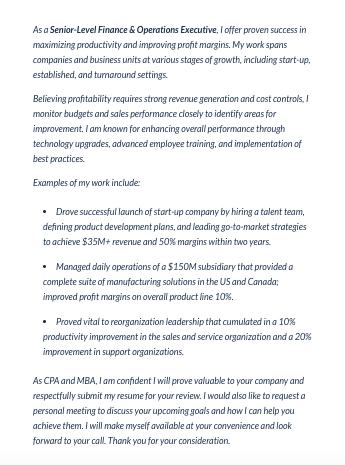 Applying for a higher-up position requires time and effort. That's because you likely have a lot to talk about if you've made it this far. But don't overwhelm the reader. This cover letter does a great job of listing some specific examples of the applicant's work with some numbers and facts to add credibility. They also ask about setting up a time to talk more so that they can share exactly how they can help the new company achieve their goals.

If you have submitted your resume to a hiring manager through an application portal, you may want to follow-up via email, as well. This ensures that someone is on the other end — not just a robot. So reach out to someone at the company to let them know that you've just applied, so they'll keep an eye out for your resume. You can also include other materials that may help, like this cover letter does.