What is body shaming?

Body shaming is the act or practice of mocking or making critical comments about a body shape or size.

Body shaming is often embarrassing for the person who is being shamed, although the person making the comments may not always be intentionally trying to hurt them.

Why do we body shame?

Almost everyone has felt body shamed at one point or another. Because we live in a world that puts a lot of stock in external appearances — and especially in thinness —body shaming can sometimes be carried out from a well-meaning place.

Someone may feel they are giving you advice on how to move up in the world by criticizing your appearance, or feel that they're complimenting you for your work to abide by societal standards by commenting on ways your body has changed.

Other times, body shaming is meant to bring the other person down. Like all bullying, this tends to be the result of an insecure perpetrator who likes to hit others where they know it hurts. Because our appearances are judged so harshly by the outside world, poking fun at our bodies can be an easy way for a bully to feel they're sucker punching us.

13 things that are actually body shaming

Like we said earlier, body shaming isn't always overtly making a mean comment about someone's appearance. Instead, it can appear in insidious comments that upkeep the status quo and make others feel bad. Here are some examples:

While this comment may seem positive, equating being thinner with being better looking is damaging not only to the person you're speaking to, but to everyone who hears.

2. "You look like you've gained weight in all the right places."

Like the comment above, commenting on someone's weight loss or weight gain is never a good move — even if it feels positive. Body weight fluctuations should be treated as neutral occurrences and definitely shouldn't be tied to someone's appearance or worth.

Commenting on your own weight can be just as harmful as commenting on someone else's. We all have days where we think we don't look good, but using "fat" as a negative instead of a perfectly normal indicator of body mass perpetrates the idea that carrying weight is bad and can be damaging to people around you.

Like the comment above, making negative comments about your eating patterns can be damaging to people around you and their self-perception. Food is something we all need to survive — it's not something that has to be earned or should be limited for limiting's sake. Making your act of eating sound like a bad thing perpetrates this idea that listening to our bodies or eating what we want is a bad thing because it could lead to weight gain. It may cause others to feel bad about their eating patterns.

This more direct comment perpetrates the idea that food consumption is bad or that there are certain food regulations we should all follow based on the thoughts of the people around us in order to look like we're striving for society's thin ideal. It may make the target ashamed of their planned portion or of eating at all.

Telling a thin person they're lucky they can eat without gaining weight may seem like a compliment, but it's not. First, on an individual level, you have no idea how that person feels about their metabolism or body size. They may be unhappy with their body, they may be suffering from an invisible illness or they may be happy with their body but self-conscious of their eating patterns. On a higher level, you are suggesting eating is something that should be done in accordance with how much of it can be done while chasing the skinny ideal, which perpetrates unhealthy food myths and could be damaging to everyone who hears you.

While thin people may benefit from being society's ideal, it is still damaging to tell thin people that they should change the shape of their bodies. No one should have to change how they look to meet your standards or the standards of anyone.

Commenting on how an article of clothing makes someone's body look is usually not a good idea, especially if you are going to use prescriptive words about their shape like "skinny" or "fat." Skinny and fat should be neutral terms that describe body weight measurements, not negative or positive terms that describe to what degree someone should buy a dress or t-shirt.

9. "That style looks so good on women your shape."

While this comment seems like a compliment, equating someone's body shape with how they should dress isn't fair. All styles can look good on all varieties of body shapes. No one should feel discouraged from wearing an article of clothing because they think it looks good on one body but not another — especially when we've all been programmed to think all styles look good on thin women and the rest of the population should work to hide their bodies.

10. "Women just need to learn to dress for their shape."

Like the above, scolding women for not dressing for their shape is fatphobic. Any shape can wear any kind of clothes. Any statement that suggests otherwise is body shaming.

11. "A girl my size could never wear something like that."

Sadly, we've been policed into thinking there are certain things we can and can't wear based on our body size. Reinforcing that toxic belief, even when aimed at yourself, helps other women think its OK for them to think, too.

12. "You're so inspirational for trying that look."

Telling someone they're "brave" or "inspirational" for wearing a certain style at their body size is nothing short of a backhanded compliment. It shouldn't be considered "courageous" to clothe your body and like how it looks in an outfit. People should be allowed to wear whatever they want and exist without comment. A person putting on an outfit you consider "brave" should be seen as what it is: A person, with a body that's as worthy as other bodies, putting on clothes and living like everyone else does.

Equating a certain body size to womanhood doesn't just aid in ruining other women's self-esteem based on their proportions: It's also transphobic to suggest a certain body presentation has anything to do with gender. 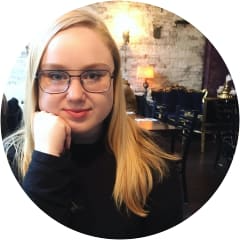 Una Dabiero is an editor at Fairygodboss, where she's spent the last three years reading, writing and editing thousands of career advice articles. Before working at Fairygodboss, she was a culture reporter. She earned a B.A. from the University of North Carolina at Chapel Hill.

7 Comments
Browse recent articles
What is Re-Onboarding and is It Necessary in the Return to Work?
Here’s Your Daily Dose of Career Inspiration! 2 Women Share How They Grew Into Global Leaders
4 Phrases Confident Women Tell Themselves When They Don’t Get The Job They Dreamed Of
If You're Re-Entering the Workforce, You're Not Alone — 3 Tips From Women Who've Been There
Thinking of Starting an ERG at Your Place of Work? Here are 6 Ways to Ensure It's Inclusive
The 3 Biggest Job Search Challenges During Today's Uncertain Times — And How Best to Tackle Them
See more
Achieve your career goals.
Be part of the largest online career community for women to find jobs, advice, and support — for free.