Have you ever felt an intense emotion but struggled to come up with a way to put your feelings into words? Perhaps you were recently laid off at work and are having trouble processing the mixture of anger, grief, sadness, and other emotions you are experiencing.

Some emotions may be impossible to identify. Or maybe you’re excited about the possibility of something new — a new job, for example — but are experiencing something else in addition to the excitement — something you can’t quite articulate out loud.

You’re not alone. Describing emotions is a complex and often extremely challenging — not to mention sometimes undesirable — task that leaves many people overwhelmed and even more confused than the feelings themselves. However, this ability is an important one to have in developing emotional intelligence.

Having emotional intelligence is important for all aspects of life, but especially in the workplace it can help you improve your communication and productivity. When you have control over your emotions and can recognize how your or others are feeling, it will help you better communicate with colleagues and come to faster resolutions.

The emotion wheel or wheel of emotions (sometimes misnomered the emotional wheel), created by Robert Plutchik, offers a visual representation of primary emotions, displaying the varying degrees and complexities of different feelings. As a tool, it can help people grapple with, put a name to, and come to terms with their emotions in many different contexts, including simply developing greater self-awareness. 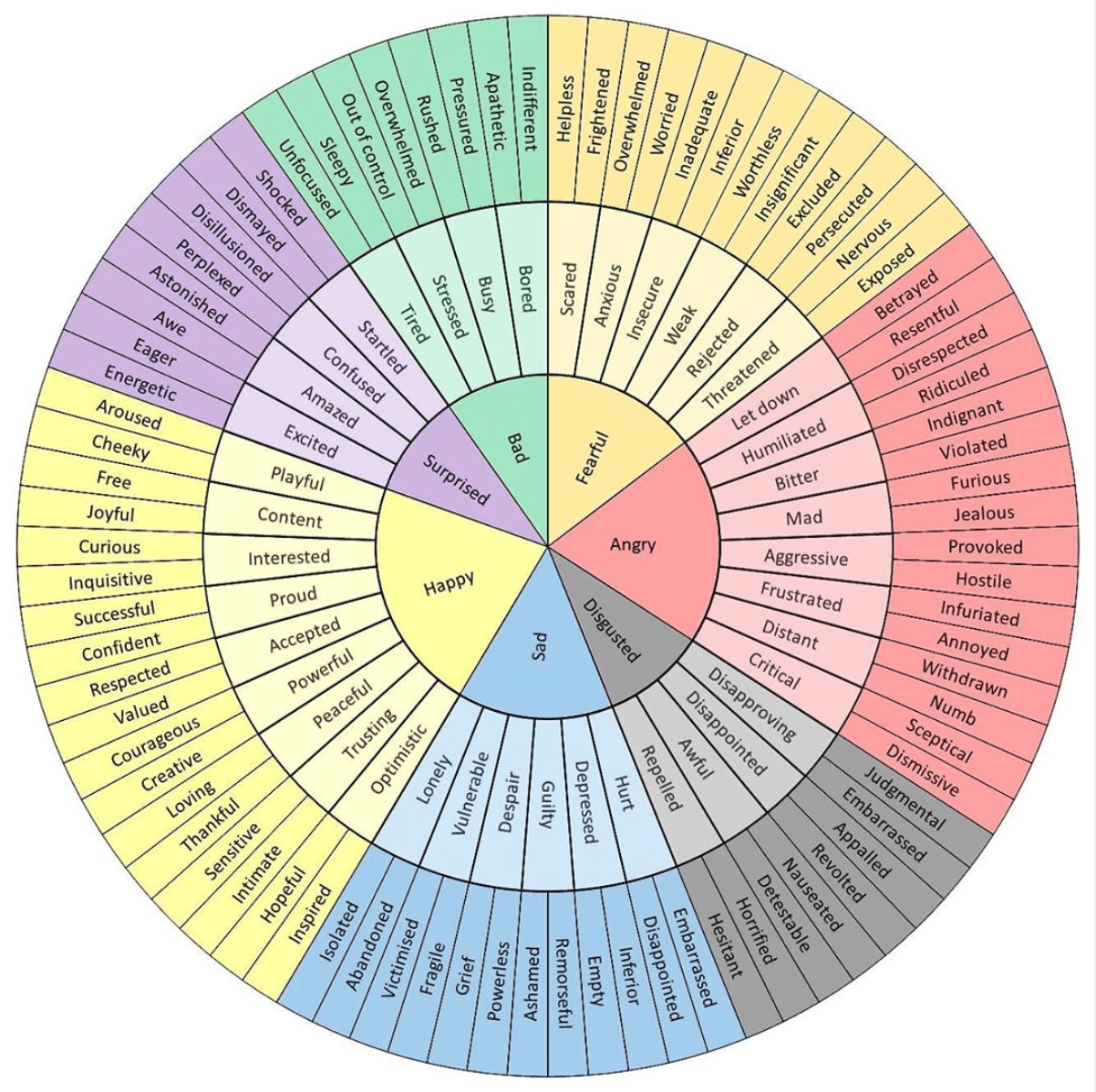 What is the Emotion Wheel?

Created by the late psychologist Robert Plutchik, the emotion wheel describes eight basic emotions: anger, anticipation, disgust, fear, joy, sadness, surprise and trust. The wheel is arranged in a circular shape with each section containing three different degrees of each emotion, with the central emotion in the middle.

For example, for the emotion “anger,” the lesser degree is annoyance, represented on the outer edge of the slice, and the greater degree is rage, situated by the center of the emotion wheel. (In Plutchik’s depiction, the sections are arranged in a flower shape with each “petal” representing one emotion.)

Each emotion is color-coded, with the different degrees represented by darker and lighter colors. In the case of anger, for instance, rage is dark red, while anger is a lighter shade of red and annoyance is more of a pink tone.

The wheel also contains eight dyad combinations of behaviors associated with emotions, which sit between the respective pairs of emotions outside of the flower shape:

What Are the Eight Core Emotions?

As described by Plutchik, the eight primary emotions are anger, anticipation, disgust, fear, joy, sadness, surprise and trust. These emotions are physically positioned in opposition to their actual opposite on the wheel, and each contains three different degrees:

History of the Emotion Wheel

Robert Plutchik (1927–2006) was a psychologist and professor of psychiatry at Albert Einstein College of Medicine. He later served as an adjunct professor at the University of South Florida.

A widely-respected authority on emotion, Dr. Plutchik published his theory of emotion in Emotion: a Psychoevolutionary Synthesis, proposing the depiction of the emotion wheel to illustrate his ideas. This outlined the eight primary emotions discussed above and their associated manifestations. In his work, he postulates that emotions are evident in all animals, calling them, “basic adaptations needed by all organisms in the struggle for individual survival.”

The Junto Institute for Entrepreneurial Leadership calls emotional intelligence one of its most important pillars in all facets of its programs, classes, and forums. According to the Institute, self-awareness, the “ability to recognize our own emotions and mood, and our thoughts about them,” is the starting point of emotional intelligence, and the ability to put a name to these sentiments and moods is essential in all areas of our lives.

In its programs, the Junto Institute tested out variations of the emotion wheel and found that it required more emotions that weren’t represented on the standard model and its different forms. Therefore, the team created a new wheel, with each wedge representing a different emotion, along with more specific related emotions, as with Plutchik’s wheel, but based on a list of emotions developed by the team.

The Institute now uses it with members to encourage them to describe and explain their positive and negative emotions in forums and meetings. This allows members to find common ground and develop greater self-awareness. Some “JuntoCompanies” also use the Junto Wheel.

How to use the Emotion Wheel

The emotion wheel is a tool that enables people to describe and verbalize their emotions, as well as understand the relationship between and intensity of their feelings. The ability to articulate and identify emotions is an important component of emotional intelligence.

People can use the wheel to identify their emotions and come to terms with how they are feeling, make informed decisions, seek resolution, gain closure, and, ultimately, become more self-aware and self-compassionate.

Contexts in which people use the Emotion Wheel:

The wheel can also be helpful to use when attempting to explain your emotions to other people, such as in therapy. The ability to put a name to what we are feeling can give individuals a greater sense of control and help them develop a plan for moving forward and coping.

Many organizations use the wheel or variations of it to facilitate team-building and encourage members and employees to establish common ground, understand each other’s perspectives, and further develop their own self-awareness. This can lead to better working relationships, as well as improve individual skills. After all, leaders and employees alike need to have strong emotional intelligence to perform their jobs well.

The Emotion Wheel in work, life and beyond

When Plutchik created the emotion wheel, he noted that all animals exhibit a range of emotions. Feeling is a complex process, and coming to terms with how we are feeling can sometimes be overwhelming. The emotion wheel gives us explanations and enables us to explore why we feel the way we do, as well as how we manifest those sentiments.

The emotion wheel is a tool people can use in many areas of their lives, from relationships to work to coming to terms with the things that affect them and moving forward. Ultimately, it promotes greater self-awareness and understanding.

This article reflects the views of the author and not necessarily those of Fairygodboss.

What’s your no. 1 piece of advice for developing emotional intelligence? Share your answer in the comments to help other Fairygodboss members!

14 Comments
Browse recent articles
Are You Feeling Unheard on Slack? Here are 5 Ways to Amplify Your Voice
2 Leaders Share How They’ve Progressed Their Careers as Women in Tech
How to Unleash Your Superpower by Embracing Your Authentic Leadership Style
4 Ways to Work Through Guilt About Leaving a Role — According to a Career Strategist
3 Reasons Why Women Are Losing Out on Promotions During the Pandemic
A Tech Leader’s Top 4 Tips for Inspiring Remote Teams
See more
Achieve your career goals.
Be part of the largest online career community for women to find jobs, advice, and support — for free.