Bows and arrows may not be everyone’s weapon of choice, but these fearless females have shown what they can do with their archery skills. Whether it’s saving their family’s lives, hunting food as a means of survival or dominating world competition with their accuracy, here are archers who will inspire you with their bow and arrow ability.

When this Disney princess sees that a group of suitors is trying to win her hand in an archery competition, she quickly takes matters into her own hands. Entering the contest herself, Merida shows off her impressive archery skills win the day (and a fight against sexism).

Before there was Merida, Disney already had produced a film about a fearless female archer — Fa Mulan. Also trained in sword fighting and martial arts, Fa Mulan disguises as a man so she can fight and defend her family’s honor.

Born into an apocalyptic world where she must literally fight for her life, Katniss’ archery ability becomes a means to her survival in The Hunger Games. She may be self-taught, but that doesn’t mean her skills are any less resourceful — or dangerous.

Neytiri is a princess of the Omaticaya clan, but like fellow princesses Merida and Fa Mulan, she’s not the delicate type. She initially uses her archery skills as a means of protection; when she falls in love with an avatar, Jake Sully, she teaches him the ways of her clan — including how she uses a bow.

5. Susan Pevensie, The Lion, The Witch, and the Wardrobe

After receiving a bow and arrows from Father Christmas, Susan, the second oldest of the Pevensie family, immediately gains a knack for archery. You can watch her skills in the book’s second film adaptation, Prince Caspian, where she uses them in battle. The arrows are said to never miss their intended target.

Nam-joo is an archery medalist and member of the national team who uses her skills to revenge a death and kill a monster. While she’s been trained to compete, she must adapt her skills in a life-saving, dramatic shot.

While Guinevere is often seen as a love interest in the King Arthur tale, the 2004 film version portrays her as a warrior in battle. She uses her archery skills while fighting among both men in her love triangle and puts down her bow only after battle to marry King Arthur.

Before Saoirse Ronan starred in Lady Bird or Little Women, she first played a young assassin skilled with a bow and arrow. While her skills are first used as a means of survival, she later uses them to fight for her life when an intelligence agent comes to find her.

As part of both a video game franchise and movie adaptations, Lara is an English archaeologist who’s skilled at fighting. While she also uses pistols, her archery ability comes through in the 2018 movie. 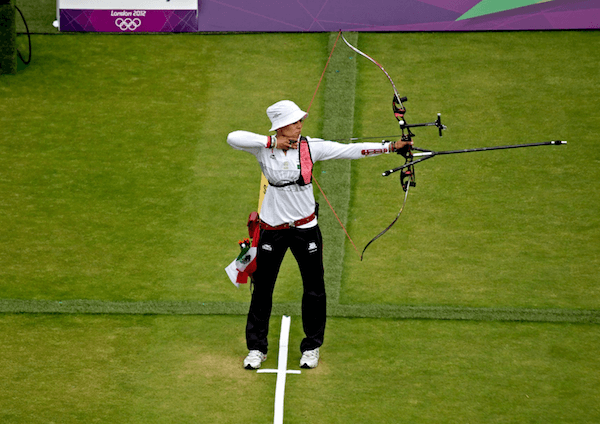 Source: Wikimedia via cobaltfishRomán is a Mexican archer and a three-time Olympian. At just 20 years old, Román made her Olympic debut in the Bejing. After becoming the most decorated female at the 2010 Central American Games, she won a silver medal when she returned to the Olympics in London in 2012. Román has achieved medal finishes at the women’s World Indoor Archery Championships, Archery World Cup and Pan American Games. 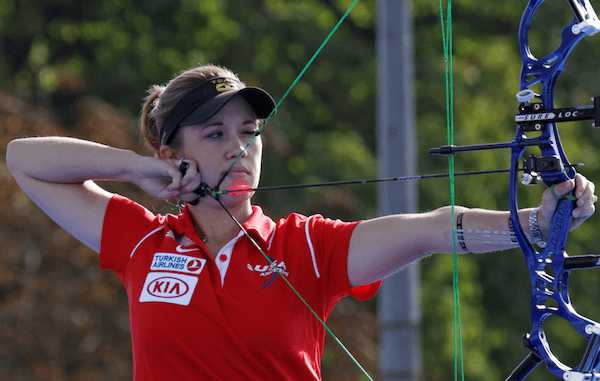 Source: WikimediaWinning an Archery World Championships cadet title at just 13, Jones had an early started to her accomplished archery career. As an American archer, she’s won competitions both at home and abroad, including the World Archery Championships and Archery World Cup. She is a former world number one archer.

Also a former world number one archer, Yun is a highly decorated and successful archer from South Korea. She’s won three Olympic gold medals and holds the Olympic record for a women’s 18-arrow match. Yun was only 18 when she set the record in the 2000 Olympics in Sydney and had been on the national team for just a year. She matched it again in the 2004 Olympics in Athens.

Along with Yun, Kim was a member of South Korea’s Olympic archery team. Kim won four Olympic gold medals in 1988, 1992 and 2000 Olympics: one individual in 1988 and three team medals, one in each year. She has won six Olympic medals total, two in the Asian Games and four gold medals in the World Championships. She was declared the Female Archer of the 20th Century by the International Archery Federation.