15 Feminist Artists You Need to Know

Feminist art is and has been both sculpting and reflecting on culture. But what is feminist art and who are some empowering and enlightening feminist artists to follow?

What Is Feminist Art?

Feminist art first emerged in the late 1960s amongst anti-war demonstrations and civil and queer rights movements that had feminists itching to intervene through art. Feminist artist Suzanne Lacy has called described the goal of feminist art as an effort to "influence cultural attitudes and transform stereotypes."

"First-wave feminism won political suffrage for women in the early 20th century; yet, impasses to full political participation, as well as systemic political and socioeconomic inequality, remained," according to Artsy. "Inspired by the Civil Rights movement, feminist leaders in the 1960s and ’70s took critical aim at both systems and institutions that sustained gender inequality. Championing the phrase 'the personal is political,' notable feminist voices of this so-called second wave of feminism like Betty Friedan (The Feminine Mystique, 1962) and journalist Gloria Steinem (who founded Ms. magazine in 1972) called for equality in the workplace and at home. The soon-to-be global movement succeeded in achieving longstanding societal and political changes, and feminist art developed as one cultural branch of second-wave feminism."

Ultimately, feminist art creates a dialogue between the viewer and the artwork through a feminist perspective. And this artwork is not merely for aesthetic admiration; rather, it's intended to incite viewers to ask social and political questions that could create change toward equality. Feminist art is consciously created.

Feminist Artists You Should Know

There are tons of female artists you should know, but not all female-created art is feminist art. With that said, here are 15 specifically feminist artists whose work you should know and follow. These women have been intentionally creating art that speaks to women's issues and women's rights throughout history. 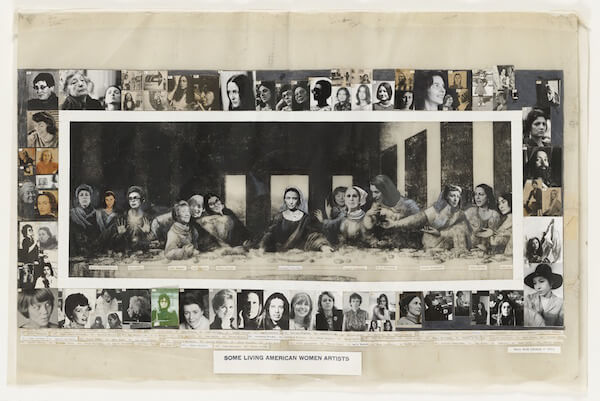 Mary Beth Edelson is most famous for using an image of Leonardo da Vinci's famous mural, on which she affixed heads of notable female artists in place of the original men. Her piece is arguably one of the most iconic of feminist art. Her work is a staple of 1960s feminist art. 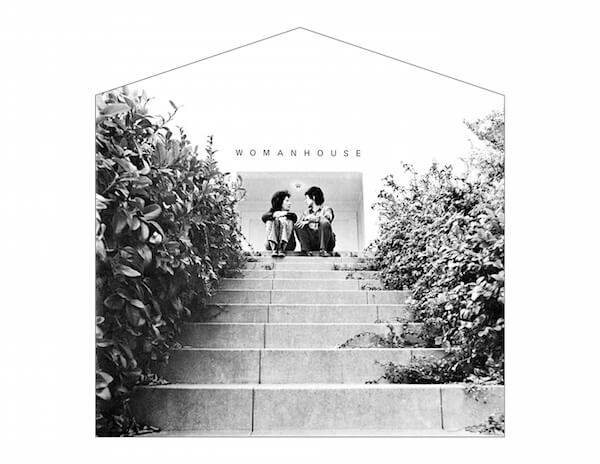 Judy Chicago is famous for her installation Womnahouse in 1972, which is a collaborative piece about women reclaiming the domestic space and challenging traditional female roles. She's also recognized for one of her most famous pieces, an installation called The Dinner Party, which resides in The Brooklyn Museum. Chicago also began the first-ever women's art program. 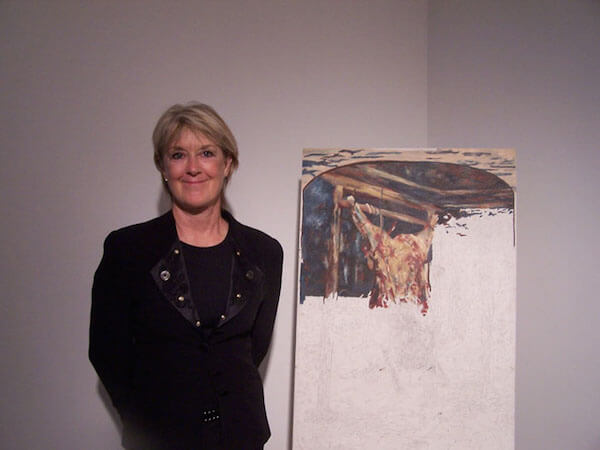 Suzanne Lacy is an American artist, educator and writer who has worked in a variety of media. She's worked in installation, video, performance, public art, photography and art books, always focusing on social themes and urban issues. She's perhaps best known, however, as one of the Los Angeles performance artists who became active in the 70s and shaped an emergent art of social engagement. 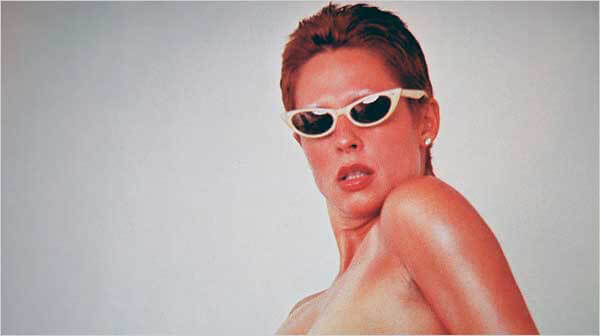 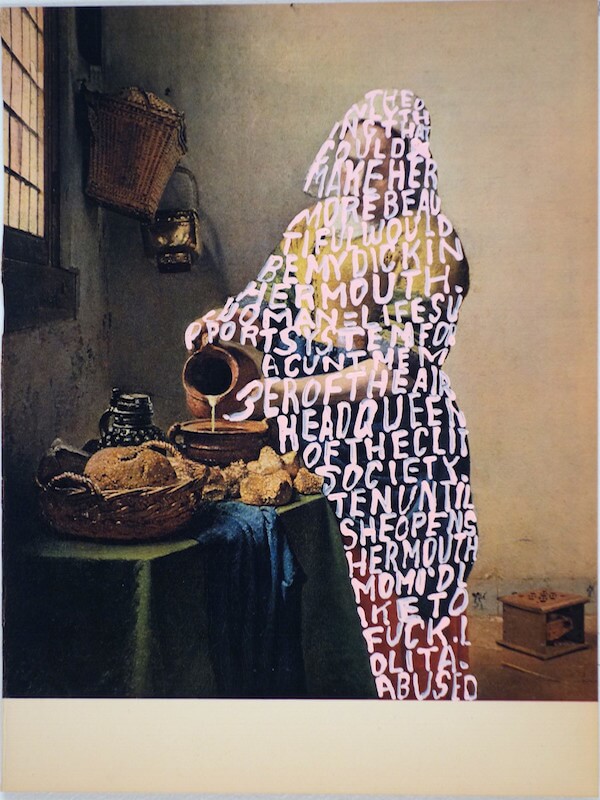 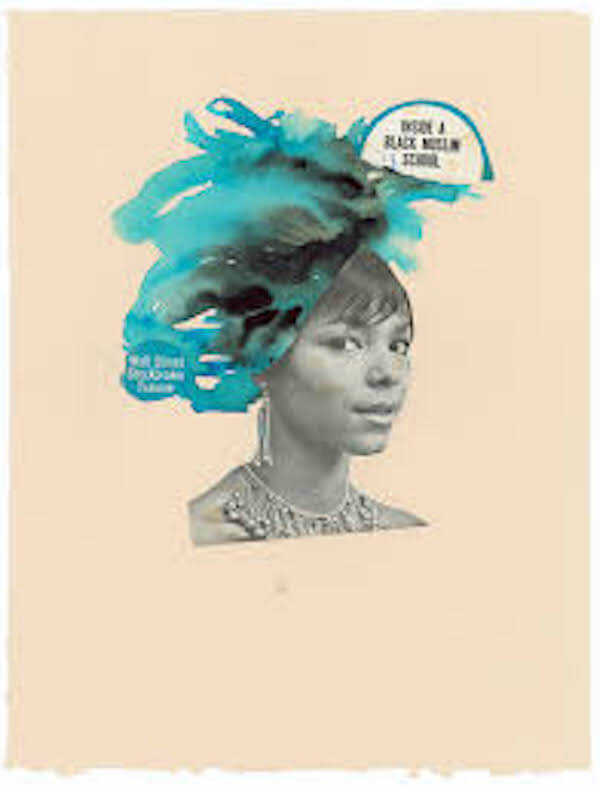 Lorna Simpson is an African-American photographer and multimedia artist of the 80s and 90s. Her work explores themes such as sexuality, identity and politics. 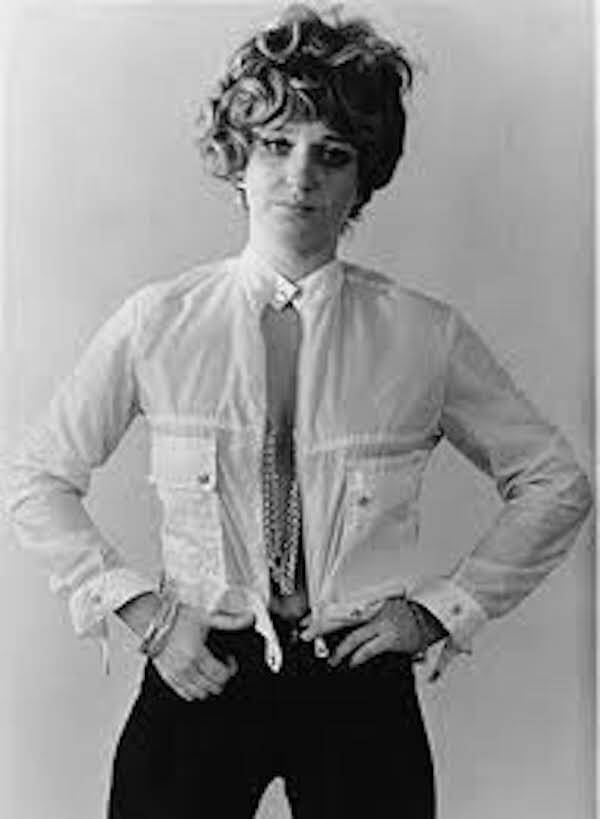 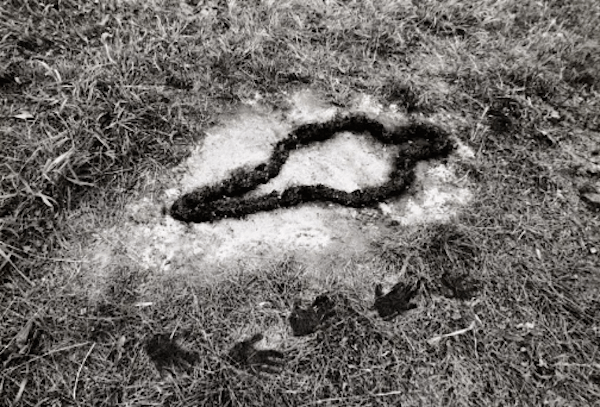 Ana Mendieta, a Cuban-American performance artist, painter, sculptor and video artist, is best known for her "earth-body" artwork. Perhaps one of her most recognized pieces is a photograph depicting a rape scene in 1973, in response to the highly publicized rape and murder of Sara Ann Otten. 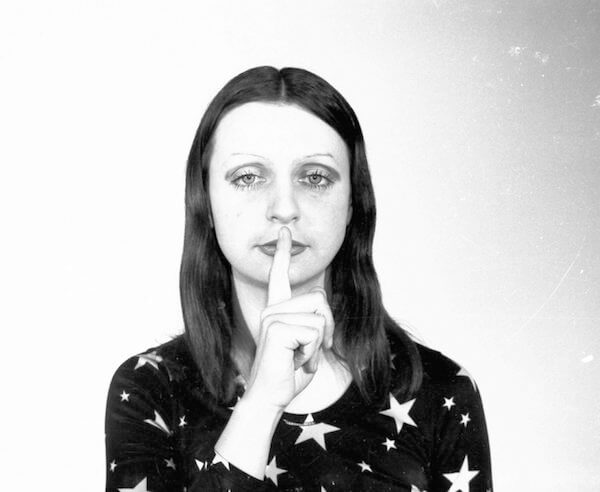 Ewa Partum is a poet and artist whose work explores gender issues and female identity. Partum was involved in WACK! Art and the Feminist Revolution, thanks to her work in the feminist movement in the 70s and 80s. 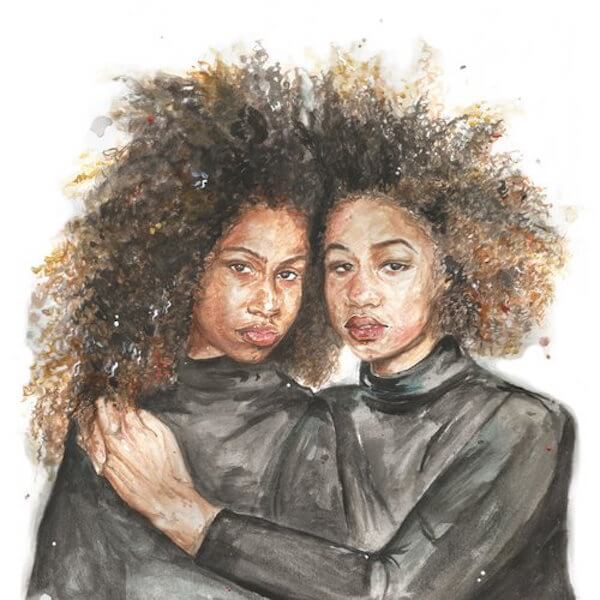 Jade Cowans tells tales of empowerment and honesty through her body of work titled "Sister Series," which celebrates the narratives of sisterhood. 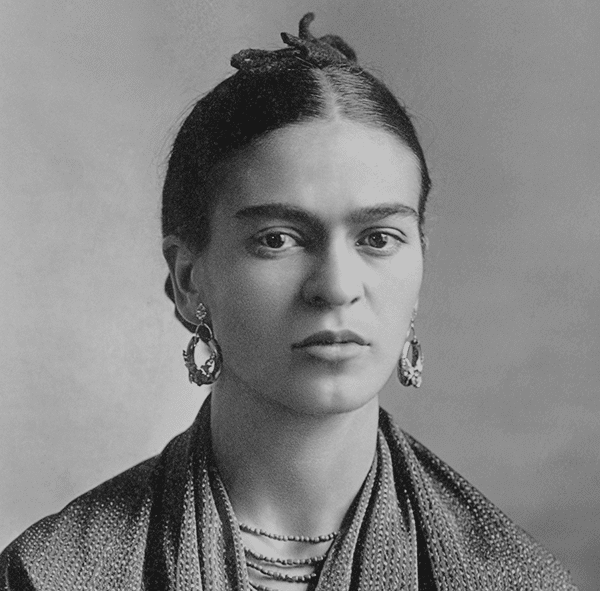 Frida Kahlo is one of the most famous feminist artists, born in Mexico in 1907. She was a painter who primarily painted self-portraits and paintings with surrealism, and she became politically active in the 20s when she joined the Young Communist League and the Mexican Communist party. Her artwork explores pregnancy, abortion, gender roles and sexuality. 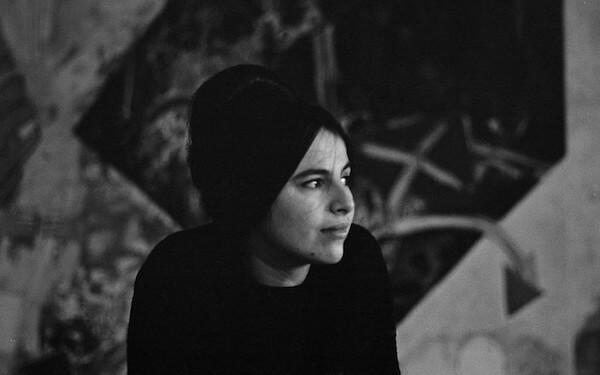 Photo via The Times of Israel

Eva Hesse, a German-American sculptor, came to the United States during the rise of Nazism. She experimented with everyday materials as a minimalist artist who depicted abstract ideas full of sexual innuendos. 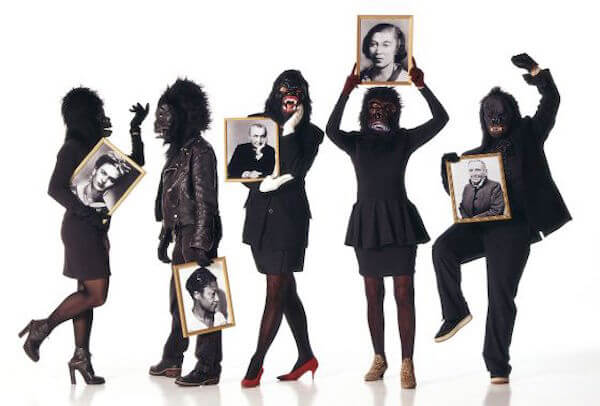 The Guerrilla Girls were a radical group of intersectional feminist female artists who wore guerilla masks when they were out in public. They wanted the focus to be on their art and not their individual identities. Their motto: "Reinventing the 'F' Word: Feminism." 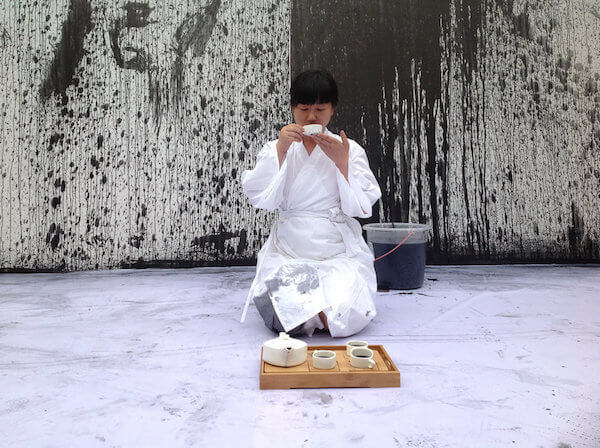 Li Xinmo is a controversial Chinese feminist artist who, in 2012, participated in the group exhibition Bald Girls, a platform for the promotion and development of feminist art and theory. Her performance art is based on personal experiences. She's known for her piece, Memory, in which she faces the experience of abortion by tearing off her dress, ripping it up into pieces and turning them into dolls. 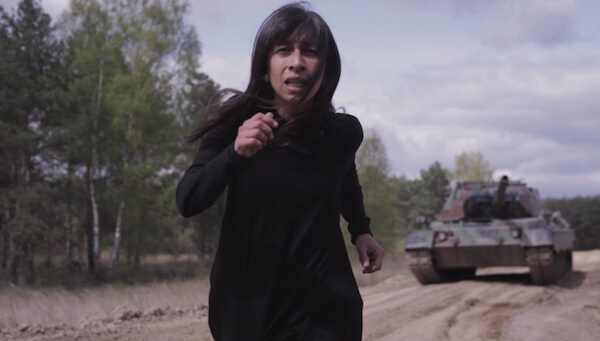 Regina José Galindo is a performance artist from Guatemala who uses her body as the protagonist in her art that explores social injustices like gender and racial discrimination. In her work, Piedra, she painted her body gray and sat in a static rock position, allowing members of her audience to urinate on her to protest abuse and unequal power relations.

More on the History of Feminist Art

Before feminist art, female artists were largely left out of the public eye, denied exhibitions and gallery representation based on their gender. Feminist artists began creating non-traditional alternative venues to showcase their art.

Artsy defines feminist art as "works created from the late 1960s through the early ’70s that focused on women’s lives and experiences — primarily in domestic contexts — building on the so-called second wave of feminism." It also notes that "the term encompasses a wide range of approaches, including collaborative installations and performance."

Art historian Linda Nochlin's essay, Why Have There Been No Great Women Artists? , is touted for first sparking the debate when it was published in 1971. Since then, however, tons of feminist artists have emerged.

These artists grew in their activism, challenging the systems in place. For example, in New York City, feminists artists gathered to create art organizations like the Art Worker’s Coalition, Women Artists in Revolution (WAR) and the AIR Gallery, that specifically addressed feminist artist rights and issues. And then they protested museums like The Museum of Modern Art and the Whitney Museum of American Art that didn't exhibit many women artists.

By 2008, feminist art was given its first major retrospective at The Museum of Contemporary Art, Los Angeles: WACK! Art and the Feminist Revolution, which featured over 120 works from artists and art groups around the world.

Today feminist artists tend to "rather daringly appropriate the work of earlier feminist artists, often with a heavy dose of irony and kitsch," according to Artsy. "It may seem counterproductive to fuse feminism with kitsch, but kitsch assumes a mainstream, successfully established canon—testifying, perhaps, to feminism’s successful permeation of mass media and culture."

Artsy also adds that "contemporary artists know their feminist history, and they understand that standards of taste, beauty, relevance and value have long been debated without women’s voices; yet, those standards remain powerful in the art world."

"If unattainable fantasies (such as impossible standards of beauty, passive female sexuality and all the dreams and values that upheld gender hierarchies) were the prime target of an earlier generation of feminist critique, contemporary feminist art extends its scope to address the complex political terrain of feminism in the 21st century," according to Artsy. "These examples willingly seduce with their visual allure, a quality historically associated with femininity and original sin. By simultaneously espousing and critiquing ideals of beauty and rapture, these artists draw you into the room, only to expose that room as warped and unstable, constructed with an outdated set of tools. Having fundamentally changed the way we understand what we thought we knew, contemporary feminist art offers up its own version of history and representational space. As such, it may sometimes be wary of unattainable fantasies more broadly, and even those of feminism itself."

Feminist art has taken on different issues over the years via new and innovative art forms. But the constant remains that feminist artists are telling a story through an oft-missing voice: the female voice.