Mystery Woman
Tell us more for better jobs, advice
and connections
YOUR GROUPS
Discover and join groups with like-minded women who share your interests, profession, and lifestyle.
COMPANIES YOU FOLLOW
Get alerted when there are new employee reviews.
YOUR JOB ALERTS
Get notified when new jobs are posted.
Gratuity Gab

Never Know How Much to Tip Delivery? 19 People Weigh In

Tipping is a conversation topic that tends to come up over and over. Whether it's because you're traveling and adjusting to the norms of a different tipping culture, or, it's because it's time to split the bill amongst friends, how much money to leave for a service tends to be pretty debatable.

Here at Fairygodboss, we turned the question over to our community to see what you had to say. 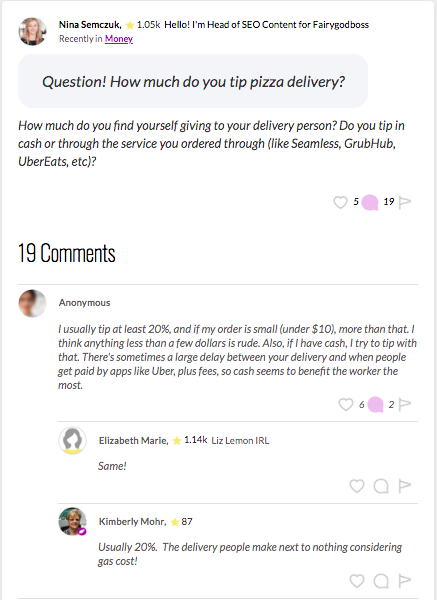 As you can see, tipping roughly 20% was the majority vote in our community. Click the image above to chime in on the conversation yourself.

Do I have to tip pizza delivery?

Whether you agree with it or not, the U.S. is a tipping culture. Delivery people are often the lowest on the totem pole which means they not only appreciate the money, they often rely on it for income.

While the Fairygodboss community consensus was 20%, many other sources will advise a minimum of 15%. Some community members gave dollar amounts, too: $5 for a large order, or $2-3 for a slice. At the absolute minimum, try to tip at least 10%. If you can't afford that, it may be time to reconsider whether you should be spending your money on fast food delivery.

When to consider tipping more.

1. When it's raining, hailing, snowing, sleeting or otherwise unpleasant outside. If you live in an area where delivery arrives via bike or scooter, consider adding even more because they're exposed to the elements.

2. When it's a busy time, such as during sporting events or weekend nights.

3. If you live at the edge of the delivery zone.

5. If your delivery person goes above and beyond the expected service.

When to tip less.

If delivery is late, or your food is cold or the order is incorrect, try calling the restaurant first to allow an opportunity for correction. Many times it's not the actual delivery person's fault; maybe the kitchen was overloaded or there was an accident. It's not the best idea to withhold tips as a punishment; at the end of the day, you want to give the benefit of the doubt.

Why do pizza places charge a delivery fee?

For one, it's a manpower issue. Restaurants that deliver need to pay their drivers and delivery staff, which can include a separate phone line and section in the kitchen at some establishments. Additionally, some restaurants will also subsidize gas and insurance, which again drives up the cost of delivery.

Finally, most delivery apps charge a fee to the participating restaurant for use of the service.

Keep in mind, the delivery fee is NOT a tip; it's almost always charged by the restaurant to cover its own costs and doesn't trickle down to the actual delivery person.

Overall, the consensus seems to be that tipping your delivery person in cash is the best. When you tip through an app or through the restaurant, you can never be 100% sure the money makes its way into the hands of the intended person. That said, if you don't keep cash on hand, do tip through whatever means you can.

The easy way to calculate a tip in your head.

A mental math trick you can use to impress your friends is calculating the tip without your smartphone.

It's pretty simple, and only takes two steps:

1. Calculate 10% of the bill by moving the decimal one place.

If you want to do 15%, take half of the 10% figure and add it in. You can always round, too, to make it easier than calculating change (though, you'll want to round up to avoid shortchanging the tip).

[If you calculate it exactly, it's $3.50; this method can save you time or reliance on a phone, though!]