What Does It Mean To Be A Family-Friendly Employer?

It’s back-to-school season, and every year, as summer draws to a close, millions of families prepare to adjust their schedules to a different rhythm of daily life. In the workplace, too, employers have also been trying to adjust…to the fact that more and more employees are looking for support as they grow their families.

A new generation of millennial employees who have started families (or will soon) are changing the face of the traditional American household. Today, 40% of the breadwinners in households with children are women, same-sex couples adopt and have children via surrogacy and more couples dispense with traditional gender roles in child-rearing.

In response, employers are using new tactics to attract and retain employees with diverse families. Some companies are expanding their parental leave policies, while others offer perks such as egg-freezing and adoption benefits.

But what does being family-friendly really mean? And where should employers focus? 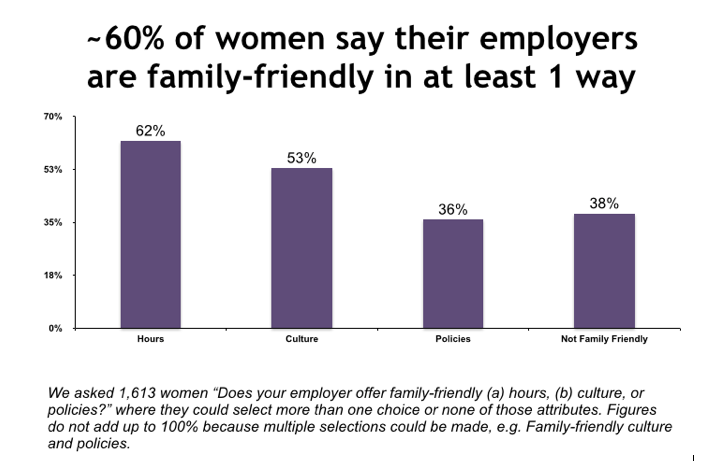 Perhaps the most surprising finding was that a majority (62%) of these women (who span a wide range of ages and work in a variety of industries, some without children and others who are mothers) reported having “family friendly hours”. While there's no doubt many employees who struggle with overwhelming work loads both in the office and at home, this was a good reminder that many people probably still probably work traditional hours between 9-5 pm (or something similar).

On other fronts, however, there was less consensus: Only a thin majority (53%) of women believed their employers created family-friendly cultures. Of course, culture is difficult to measure because it manifests itself in everything from the speeches of senior leaders to unspoken rules about leaving early to attend a kid’s school play. As a result, family-friendly cultures seems to vary greatly by employer. And at companies where culture is not monolithic, department and manager/team cultures may also matter quite a lot.

The area where the women surveyed agreed that employers could improve is corporate policies. Only one-third (or 36%) of women believed their companies offered family-friendly policies.  Things like paid maternity leave and on-site childcare can be viewed by businesses as big-ticket expenses, so to some extent this can be expected.

That said, corporate policies are also an area where incremental improvement is possible. Compared to culture, which can be entrenched and difficult to measure, employers can adopt modest new policy improvements with relative ease. Policies may involve bureaucracy and changes to benefits administration, but they also present tactical issues with practical solutions. Moreover, small improvements may be financially acceptable for companies if they help reduce employee attrition or increase employee engagement.

At Patagonia, for example, CEO Rose Marcario recently explained how on-site childcare nearly paid for itself.

For companies looking to take baby steps towards improving their policies, a maternity or parental leave policy can be extended a week or two, for starters. Similarly, backup childcare can be offered to employees with children, as opposed to full-fledged childcare, and flexible or remote-working options can be officially established for certain positions rather than an entire company.

The data suggests change is worth considering, as an employer’s family-friendliness is highly correlated with female-employee job satisfaction. 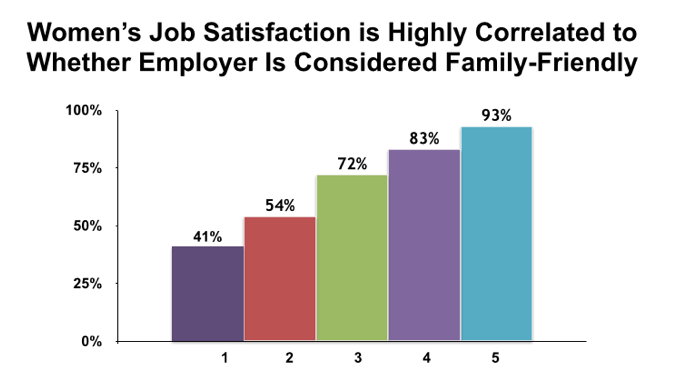 There may be no single silver bullet for how to become a family-friendly employer, but therein lies opportunity.

This article was originally published in Forbes.