Mystery Woman
Tell us more for better jobs, advice
and connections
YOUR GROUPS
Discover and join groups with like-minded women who share your interests, profession, and lifestyle.
COMPANIES YOU FOLLOW
Get alerted when there are new employee reviews.
YOUR JOB ALERTS
Get notified when new jobs are posted.
all the facts

Reports of the gender pay gap are not new, and yet the existence of this inequality can be a truth that’s hard to accept for men and women alike. If there’s someone in your life who believes the gender pay gap is a myth, take the time to educate them before merely shutting them down.  You can hear them out —  and then make your case using the facts we’ve rounded up below.

Perhaps your denier doesn’t believe in the gap because they feel women don't experience discrimination in the workplace anymore. If there is a difference in pay, they say, it’s solely due to a difference in experience, education, credentials or other performance value. Alternatively, they might claim male and female employees starting at the same entry-level position make the same amount of money. They might also say the gender wage gap exists only because women often seek flexible jobs so they can balance childcare, and as such, they work fewer hours and make less pay (more on this bit later).

The Equal Pay Act (EPA) is a law that protects against discrimination in the workplace by requiring that a man and woman employee be paid equal wages for doing equal work in the same establishment.

What is the pay gap between genders?

If the gender pay gap isn’t in the areas above, then where is it? According to research discussed in The Washington Post, the statistic we’re most commonly shown — that women make 79 cents on the dollar compared to men — isn’t entirely accurate. This figure derives from comparing all of female earnings with a white man's earnings. But it doesn’t account for differences in age, education, years of experience, job title, state, or employer size, for example.

It’s true we don't see as large of a gender pay gap when we control for workers with specific job titles. Yet women still lag behind their male coworkers by 7 percent, rather than 22 percent, after controlling for age, education, and years of experience, and there’s a 27 percent difference in total pay between men and women.

This can be seen as progress, perhaps, as we want to be tightening the wage gap for similar positions and experience levels. But it doesn’t prove that there isn’t a wage gap (because spoiler: there is), and it certainly doesn’t explain the whole picture, especially when we look at income earners in higher levels of leadership and the earned income across a worker’s career. 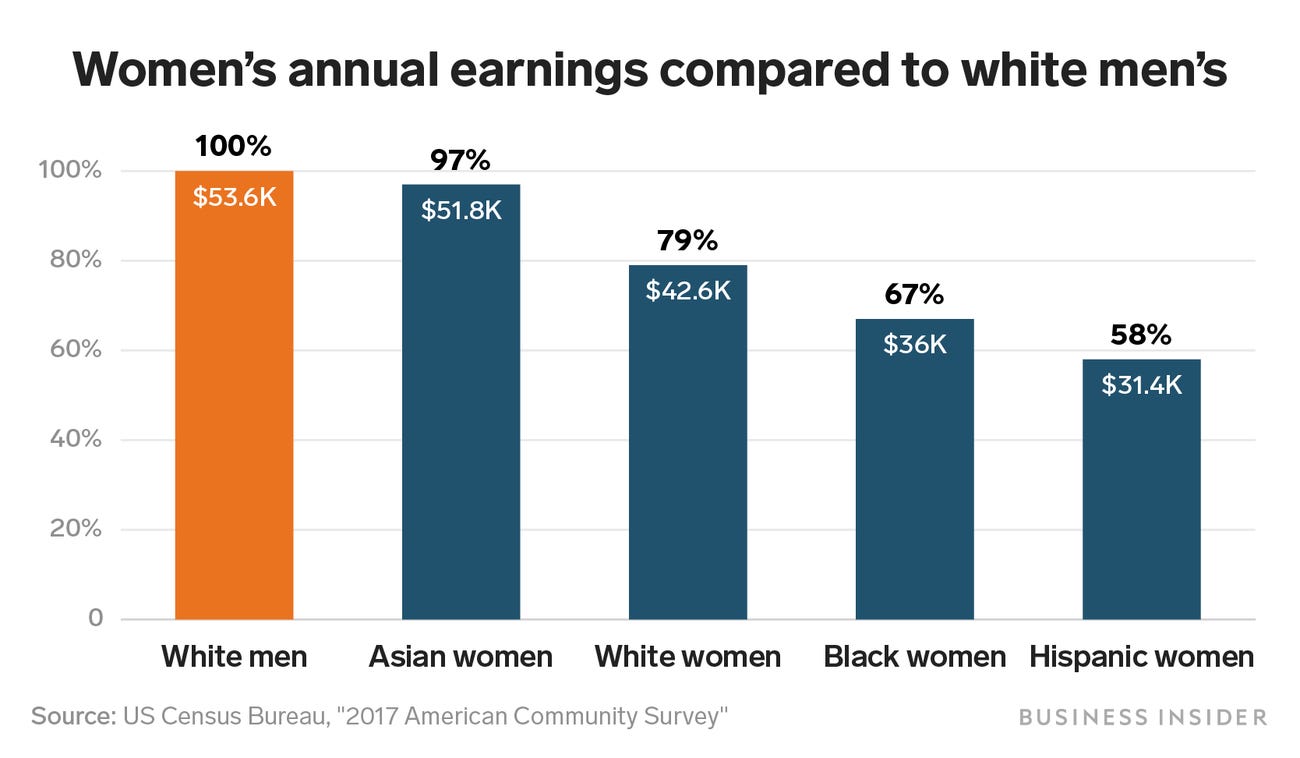 What is the gender income inequality in America?

The gender wage gap starts to widen even more when we look at “occupational segregation.” Occupational segregation is seen in trends when people hold what were once considered stereotypically gendered jobs, like women being nurses and men being doctors. The previously male-dominated jobs continue to pay more, and the traditionally female-track jobs tend to pay less to this day.

When you separate income data by occupation, the gender wage gap becomes even clearer. The biggest gender wage gaps, due to occupational segregation, are seen in jobs located in business, finance, law, and health-care occupations that are primarily self-employed, such as chiropractors. The smallest wage gaps are seen in technology and science industries, and health-care positions with a small degree of self-employment, like pharmacists.

In addition to occupational segregation, we see a difference in female wages following the birth of a first child, often referred to as the “mommy tax.” It's argued that after the birth of a child, women seek out flexible positions, which tend to pay less than a job that requires a lot of in-person office hours. This “temporal flexibility” comes at a high cost. When women take on the role of primary caretaker and seek out a job with flexibility, they do earn less than counterparts who have the same level of education and experience but who are available for longer hours.

Even though we know the gender pay gap is not a myth, this still leads to the question: “Is the gender pay gap really a gender caretaker gap?” Part of the gender pay gap equation is the need for flexibility in caretaking roles. How can employers consciously close the gender wage gap, especially during the caretaking years of young children or aging parents? This is a topic for another discussion, but a valid question to raise.

If you have gender pay gap deniers in your life and aren’t sure how to deal with them, now you have some data-driven ways you can educate them. And we can start by saying: The gender pay gap is real, but it doesn't start where you think it does.

Jennifer Mayer supports parents through pregnancy, birth, new parenthood and the transition back to work. She's the founder of Baby Caravan, a birth & postpartum doula agency, and Baby Caravan at Work, a corporate consulting practice based in New York City. Jennifer lives in Brooklyn with her husband and son.