The fact that a gender wage gap persists in the workplace is no secret by now — but the explanation and remedies for the inequity have remained elusive. A recent report titled “Visier Insights: Gender Equity” clarifies some of the phenomena underlying this issue.  It turns out that the situation is more complex than the “equal pay for equal work” solution might suggest. In fact, there is evidence of a growing gender gap in management positions beginning at age 32 — a “manager divide” that correlates with a widening of the gender pay gap across various occupations and levels of education.

Released last month by Visier, a company that evaluates workforce data to advise businesses, the report analyzed information on 165,000 employees from dozens of Blue Chip U.S. companies. The results offer a look at how men's and women's careers evolve over time and investigate how these patterns correlate with inequality in both managerial positions and pay.

The report’s findings are bleak, showing that the gender wage gap is a systemic issue. While the subject has garnered significant attention in recent years, leading many employers to adopt “equal pay for equal work” policies, Visier’s report demonstrates that men and women still do not have equal access to the highest-paying work. With men still dominating the highest-paying jobs, the wage gap remains wide open.

Visier’s report shows that at age 32, women begin to be underrepresented in management positions, which tend to pay twice that of non-management positions. It is no surprise, therefore, that the gender wage gap intensifies at precisely that age. At age 32, women in the U.S. earn about 90% of what their male counterparts make. This gap intensifies as women get older; by age 40, they typically earn just 82% of what men earn.

John Schwarz, founder and CEO of Visier, points out that “the gender inequity is not just a compensation issue; it is a problem of unequal participation of women in the higher paying managerial jobs.” 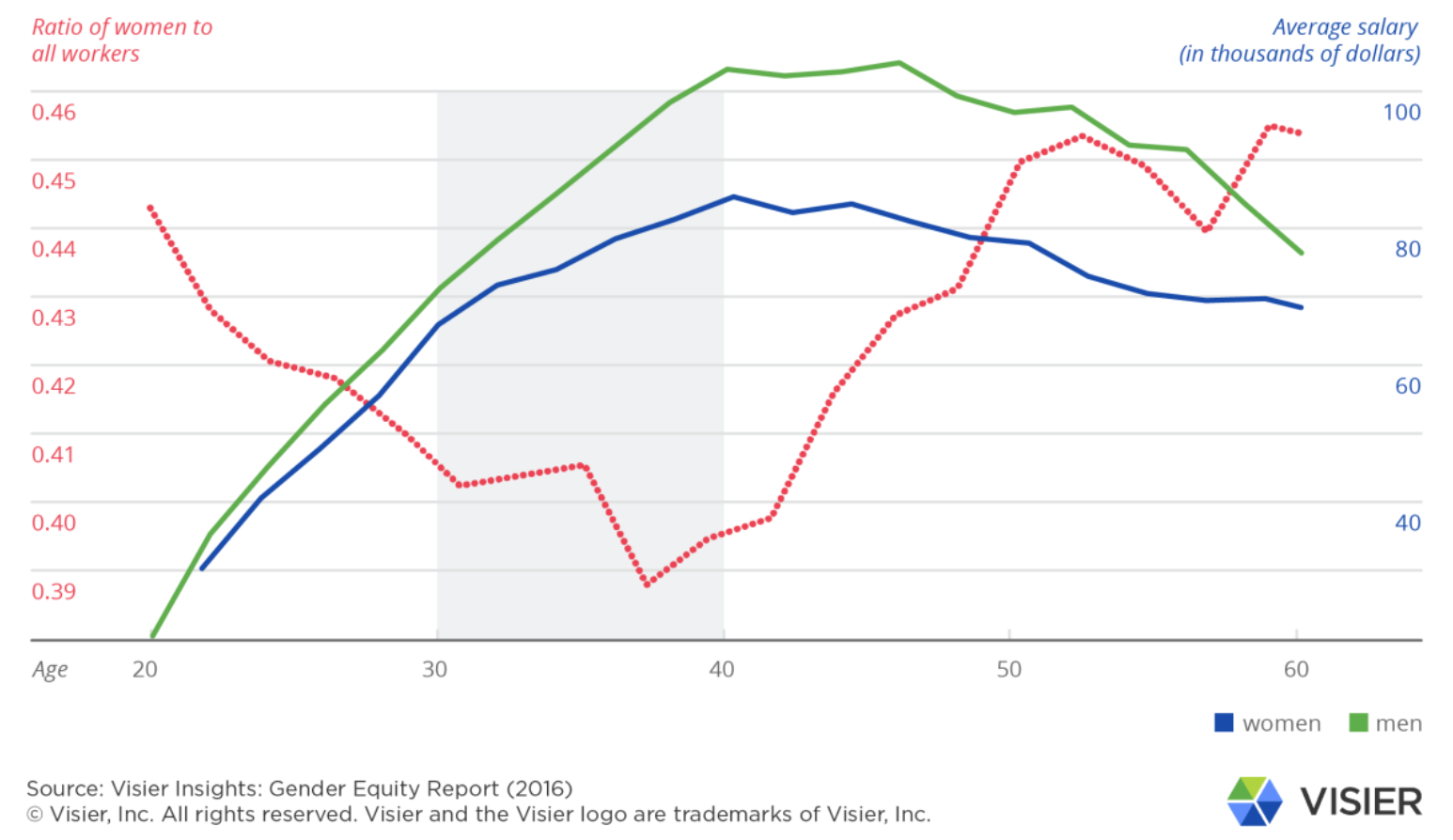 This trend can exist even in fields dominated by women. I spoke to one woman who is employed at New York City middle school where the leadership team last year was 71% male, even though the staff was just over 50% female. She noted that at her school, three of the four grade team chairs were men, and one of them was selected over a woman who had more years of teaching experience both at that school and overall.

It seems that men may be given the benefit of the doubt more frequently than women when it comes to promotions. Moreover, since women have commonly had to sacrifice their careers when starting a family, men — who may be less concerned about how raising children will impact their professional life — may be more inclined to apply for higher-level positions, even as their families are growing.

It appears that one decision in particular — the choice to start a family — can force women to sacrifice career advancement and its corresponding wage increases. According to Visier’s study, women between the ages of 25 and 40 — the age range when the majority of mothers are having and raising their children — constitute a lower percentage of the total workforce than women who are outside that age range. 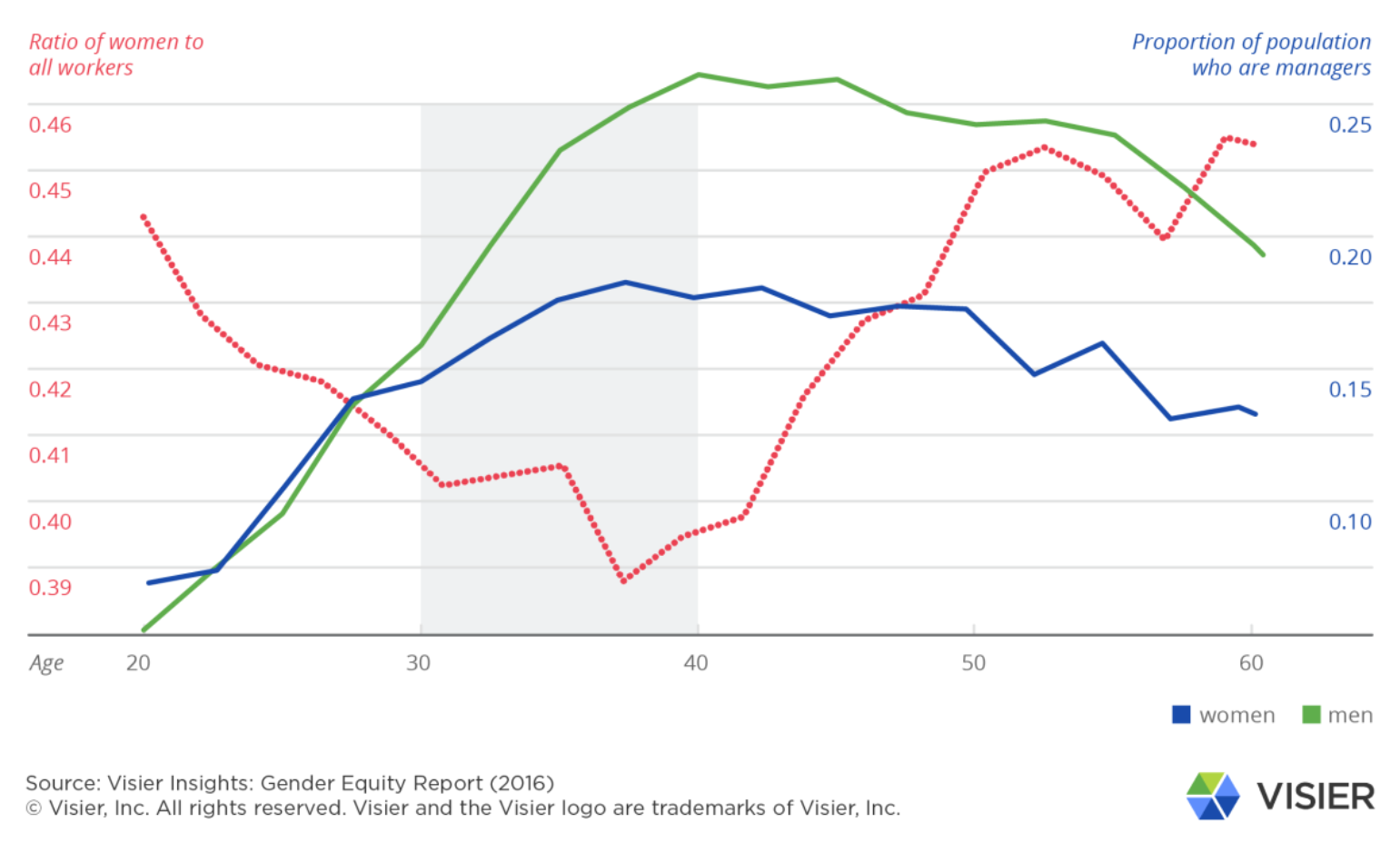 How Can We Shrink The Gender Wage Gap?

According to Visier’s report, if women and men were equally represented in management positions, the gender wage gap would decrease to 10% across all age groups. While still a disturbing divide, it would represent a significant improvement for women ages 32 and older.

Visier’s report suggests concrete alternatives to help employers address the management divide, such as considering at least one female candidate each time a position needs to be filled, implementing blind screening by removing names from resumes, and adjusting HR and compensation policies with an awareness of gender equity.

The report also emphasizes the importance of advocating for equal parental leave policies. Sweden’s “Daddy leave” policy, instituted in 1995, created a monetized incentive for fathers to take parental leave and, according to Visier, resulted in a 7% increase in a mother’s future earnings for each additional month of parental leave taken by her spouse.

In order to address the “manager divide,” it appears that we need a cultural shift that makes it socially acceptable for both men and women to take time off from work to care for their children.

The Visier report suggests instilling such values early on in classrooms and other communal environments. If children are exposed at home or at school to books and games that feature stay-at-home dads, it stands to reason that they might be less inclined to subscribe to the deeply flawed stereotype that mothers are homemakers while fathers go to work.

Do you have more ideas about how to shrink the gender wage gap and eliminate the manager divide? Visit the Fairygodboss Discussion Boards, where you can post a question, share your two cents, or just start a dialogue.