#MeToo - The Harassment, The Lawsuit And How I Found Acceptance

If you’ve been on social media over the past few days, it’s been hard not to see the impact of the #MeToo movement. The hashtag, started by community organizer Tarana Burke and made viral by actress and activist Alyssa Milano, has been used to inspire and encourage women to show that they are not alone in experiencing sexual harassment. 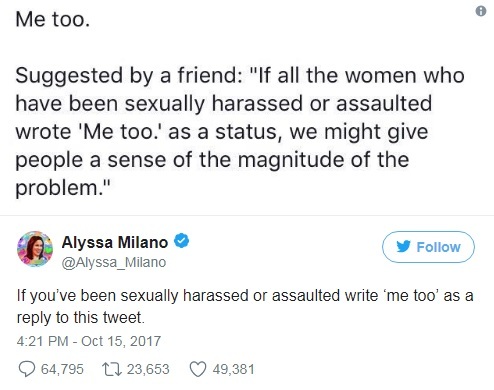 One of the many brave women sharing their story? Angela Nuttle, CEO of the Corporate Talent Institute. In an interview with Fairygodboss, Nuttle shared her experience of being sexually harassed at one of her first jobs in the 1990s. “It was one of the most emotionally draining experiences of my life,” Nuttle said.

Prior to entering college, Nuttle worked as an executive secretary at a small town hospital. “My manager was a middle-aged man who constantly shared his personal woes about his marriage,” she said. “He mistook my listening as some sort of sign that I was interested in him.”

As Nuttle's supervisor became more sexually aggressive in his comments, he also made physical advances toward her. “My manager was not shy about making sexual comments about me and to me,” Nuttle said. “Everything came to a head one day when he cornered me in his office and bent me over his desk.”

Nuttle moved to file a complaint with human resources, collecting written and audio evidence in addition to testimonials from her colleagues. Though many of them stepped forward to confirm Nuttle’s experiences, Nuttle’s employment at the hospital was ultimately terminated.

“I asked to be transferred, but the word had already gotten out [about the complaint] to the other leaders,” Nuttle said. “I filed a discrimination lawsuit and won the case.”

Unfortunately, Nuttle’s legal victory was short-lived. The hospital’s defense team filed a number of appeals and eventually, Nuttle stopped fighting them. “The defense had gone to such extremes to paint me as a terrible person in spite of my spotless record,” she said. “They tried to portray the situation like I had asked for it, that I enjoyed my manager's advances. When, in fact, it was horrible and sickening.”

Like Nuttle’s story shows, sexual harassment (of all kinds) is way too common for working women.  When Nuttle saw #MeToo across social media platforms, she knew that now was the time to share her experience with others.

“#MeToo showed up, and I heard my name being called. I knew the time had come to step up with boldness,” Nuttle said. “I’m older and wiser now, and I can speak freely about it with emotional composure and maturity. My case of sexual harassment has led me to deeper reflection… I have come to a place of forgiveness and healing.”

Today, Nuttle is a successful entrepreneur, author and speaker. “I am not a victim — I am an overcomer,” she said. “My experiences have led me on a mission of helping people get out of their personal prisons so they can be seen, heard, valued and celebrated.”

1 Comment
Browse recent articles
What is Re-Onboarding and is It Necessary in the Return to Work?
Here’s Your Daily Dose of Career Inspiration! 2 Women Share How They Grew Into Global Leaders
4 Phrases Confident Women Tell Themselves When They Don’t Get The Job They Dreamed Of
If You're Re-Entering the Workforce, You're Not Alone — 3 Tips From Women Who've Been There
Thinking of Starting an ERG at Your Place of Work? Here are 6 Ways to Ensure It's Inclusive
The 3 Biggest Job Search Challenges During Today's Uncertain Times — And How Best to Tackle Them
See more
Achieve your career goals.
Be part of the largest online career community for women to find jobs, advice, and support — for free.