If you asked your best friend to describe you in three adjectives, what do you think they’d say? Now, imagine who they’re describing you to is a potential employer — how do you think their description would change?

Chances are, the language your friend is likely to use depends a fair bit not on who you are, but on who they are and which qualities they deem most important in a person. It’s likely, too, that your friend will be influenced by what specific experiences they’ve had with you. A friend who often calls you to make travel plans, for instance, may choose different adjectives to describe you (“adventurous,” “enthusiastic,” “open-minded”) than the friend who you supported during a crisis (“trustworthy,” “dependable,” “nurturing”).

These differences in how a person chooses to describe you can count for a lot when you’re asking them to be a personal reference. Unlike a professional reference, in which a hiring manager wishes to verify your past on-the-job experience, personal references are intended to give a potential employer a glimpse into your character and values. Choosing a reference who will appropriately vouch for you in this capacity is key.

When do you need to provide a personal reference?

Most often when someone asks you for a personal reference, it’s because you’re interviewing for a job at their company. Though personal references are perhaps sought less often than professional ones, many employers appreciate the candid insight they offer into a person’s character.

That being said, there are a few situations outside the scope of applying for jobs where you may be asked for a personal reference. Those situations include:

Who should I ask to be a personal reference?

Now, for the million-dollar question — who do you ask? What specific type of personal reference are employers or other individuals looking for, and who in your life will sing your praises on an interpersonal level best? There are a variety of people you can choose from in this capacity, including:

Regarding the latter point, it’s not necessary for a reference to have never worked with you before in an official capacity to be considered “personal.” They just need to be someone who can speak to and emphasize your interpersonal qualities over workplace accomplishments. For instance, a former colleague who you’ve remained close with makes sense, whereas a supervisor or colleague you’ve only interacted with in a strictly professional sense is likely better suited to serving as a professional reference.

Additionally, although there’s no set rule against this per se, it’s best to avoid asking a relative or significant other to be your personal reference. While it may be true that your older brother has known you longer than anyone, we don’t choose our siblings. It’s better to show you’re well-esteemed by a peer who doesn’t have to associate with you versus relying on a family member in this capacity. And while it’s true a significant other doesn’t have to associate with you, a hiring manager is simply unlikely to consider getting a call from your girlfriend as professional. Your best bet for personal references, then, is to stick to authority figures affiliated with something you’re proud of, be it your involvement with a charity or your performance in a grad program.

As touched upon earlier, the main difference between personal and professional references is that the latter is intended to speak to tangible facts associated with your career and professional accomplishments. Personal references, meanwhile, are alternatively called “character references” for a reason. The idea is that a personal reference will provide an employer with insight they’d be unable to get from someone who’s strictly known you in a limited office setting. Especially considering that, legally, past employers are barred from saying anything negative about you during an employment verification check (in which your name, former position(s), and the dates you worked are affirmed), a personal reference can help provide color that would otherwise be lacking.

Can you use a friend as a personal reference?

Definitely! It’s even better to choose a friend who has worked, volunteered or creatively collaborated with you in some capacity.

It’s best to not use family members as references unless there’s another reason, outside of their literal relation to you, that a potential employer should here about. For instance, is your relative the leader of an organization you volunteer through? If so, that’s one example where a family member definitely makes sense as a personal reference —  just be sure to disclose their kinship to you from the starting gate, so as not to seem like you’re hiding it!

What should you include in a personal reference?

Similar to professional references, a list of personal references should be presented to a potential employer with the following information included: the reference’s name, job title and company (even if they’re not someone you’ve worked with), phone number and email address. It’s also helpful to include the reference’s relationship to you, as well as the amount of time they’ve known you. Lastly, consider three or four to be the ideal number of references provided — more than five references may seem excessive.

Is a teacher a professional or personal reference?

This largely depends on what stage you’re at in your career. If you’ve recently graduated and are just starting out in the working world, it may make sense to list a teacher as a professional reference. Outside of this circumstance, though, teachers generally fall within the space of personal references, as they’re a connection you’ve made outside of an employment context. If the teacher is someone you’ve worked for, however, that would obviously make them a professional reference.

What kinds of questions will a personal reference be asked?

It’s likely the person you choose to be your personal reference will be asked a combination of the following questions:

How should I ask someone to be my personal reference?

This, of course, depends on your specific relationship with the personal reference in question. But generally speaking, as this individual is to be your personal and not professional reference, less formality may be needed. However, that said, you should absolutely still give this person advance notice that you plan to use them as a personal reference, even if they are your lifelong best friend. No one likes to be caught off guard, and if the first time an individual understands they’re being used as your personal reference is when the hiring manager calls them, this likely isn’t a great look for you. It could indicate to the hiring manager that you’re unprepared or unorganized at best, or perhaps even inconsiderate at worst. Below is an example of an appropriate way to inform someone you’re close to that you would like to use them as a personal reference. 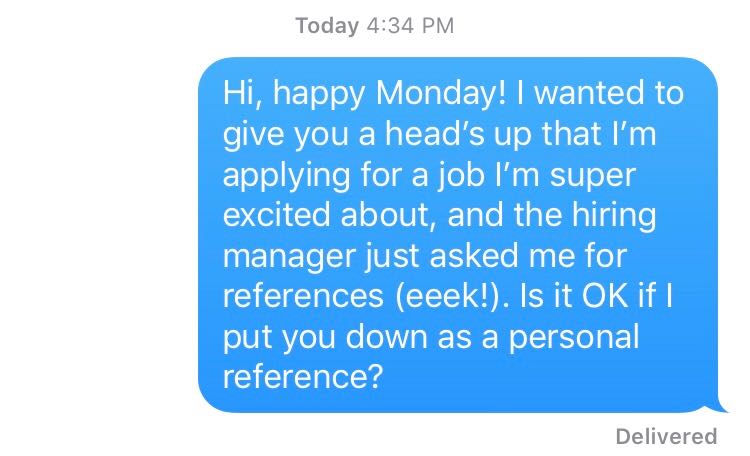 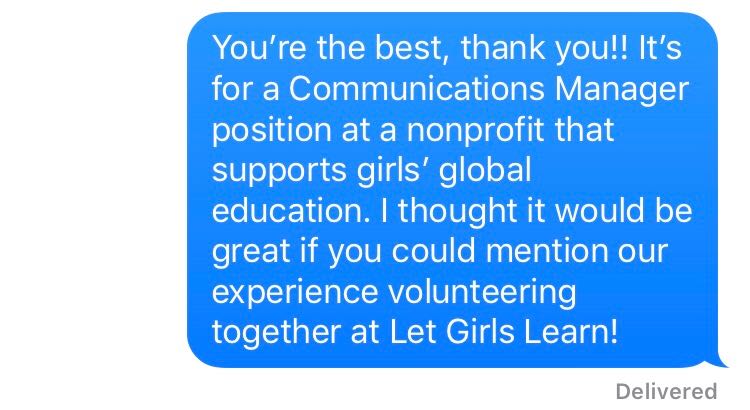 Email template for a personal reference:

Or, if a text exchange feels a little *too* casual for this particular reference, you can shoot them an email, too. Here's a template to draw from below:

I hope you're well! I'm writing you with some news: I'm currently interviewing for a (dream!) position as Communications Manager with an organization that supports girls' global education. As you'll remember from our time volunteering together at Let Girls Learn, this is a cause that is near and dear to me. Having known you and volunteered with you for several years now, I was hoping you would consider serving as a personal reference for me as I interview for this role? I'm happy to send over a little more color on the organization and what my intended role would entail if that's at all helpful! I know they're hoping to make a decision between candidates soon, so if you are indeed willing to speak to the hiring manager, I believe they would be contacting you within the week.

Please let me know how this sounds, and if you'd need any additional information in order to act as a personal reference for me. I so appreciate it!