The Suffragettes: A Brief History, Notable Figures, and Representation in Popular Culture

Women’s suffrage movements spanned centuries and took place in countries around the world. One of the more famous—and, perhaps, infamous—women’s voting rights movements took place in Britain in the late 19th and early 20th centuries. The suffragettes, as the female advocates of equal voting rights came to be known, gained notoriety for their often violent and aggressive tactics in their quest to secure their fundamental liberties.

Today, the suffragette movement is remembered for its noteworthy leaders, the actions prominent suffrage organizations such as the Women’s Social and Political Union took in pursuit of the right to vote, its representation in books, films, songs, artwork, and more.

What Is a Suffragette?

While people around the world championed women’s right to vote at various points in history, the term “suffragette” is generally applied to members of organizations in Britain in the early 20th century who fought, often through violent means, to secure women’s suffrage. Specifically, it is applied to members of the female-only Women’s Social and Political Union (WSPU).

The history and emergence of the term “suffragette” are described in greater detail below.

The suffragette movement spanned several decades, beginning in the late 19th century and culminating in the early 20th century with the passage of two laws granting women over 30 and over 21 the right to vote in 1918 and 1928 respectively. Below is a brief history of the movement with key dates, incidents, figures, and more. 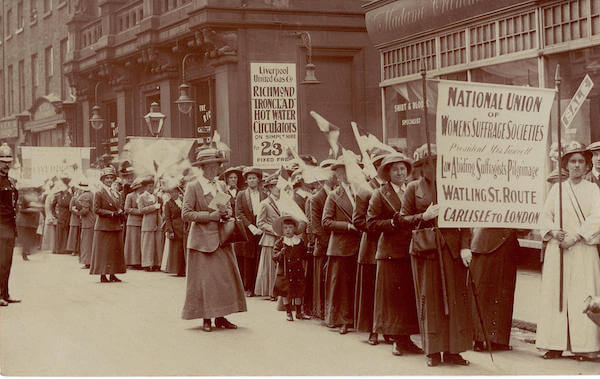 In 1897, Millicent Fawcett founded the National Central Society for Women's Suffrage (later the National Union of Women’s Suffrage Societies) in Britain. Fawcett advocated peaceful protest in the name of women’s equality and right to vote, believing that violence would deter men and potential allies from the cause. Despite some support, many men in Parliament continued to view women as incapable of participating in the electoral process.

Six years later, in 1903, Emmeline Pankhurst and her daughters, Christabel and Sylvia, established the WSPU. Unlike Fawcett, members of the WSPU advocated disruption and sometimes violence to persuade others of the necessity of women’s right to vote.

For example, Christabel Pankhurst and Annie Kenney disrupted a political meeting to ask Winston Churchill and Sir Edward Grey for their opinions on women’s right to vote. After being met with silence, the women unfurled a banner reading “Votes for Women” and demanded a response. They were arrested and opted to go to prison over paying a fine.

First used by a Daily Mail journalist around 1905, the term “suffragette” was originally meant to be denigrating, adding the diminutive “-ette” to suffragist. However, the members of the WSPU adopted the pejorative as a badge of honor.

The Cat and Mouse Act

Many suffragettes were sent to prison and would go on hunger strikes. Fearing that women who died from hunger would become martyrs and wanting to avoid the public outcry that would result if they were violently force-fed, the government of Asquith passed the Cat and Mouse Act, which would allow the hunger strike to continue until the women were weak from hunger—too weak to cause disruption. Then they would be released and, presumably, incapable of participating in violent protests. Once the suffragettes were healthy, they would be arrested again.

On June 4, 1913, suffragette Emily Wilding Davison, threw herself onto the derby track as the King’s horse, Anmer, came around the corner. She died a martyr to the WSPU cause, although her actions caused controversy.

At the beginning of World War I in 1914, Emmeline Pankhurst encouraged a cessation of violence among members of the WSPU. Instead, the suffragettes focused on supporting Britain’s war efforts. Suffragette prisoners were released the same year, and the hunger strikes and violent activities largely came to a halt.

The still-existing National Union of Women’s Suffrage Societies (NUWSS), which held fast to its methods of peaceful protest and law-abiding tactics, continued its women’s suffrage efforts during the war, reaching agreements with the coalition government.

Representation of the People Act

Who Were the Main Suffragettes?

There were many notable suffragettes during Britain’s women’s suffrage movement. Below are some of the most prominent and well-known figures in and spearheaders of the movement. 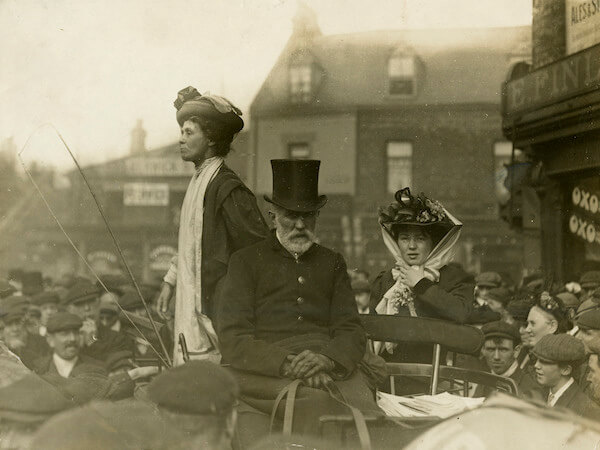 The founder and leader of the WSPU advocated violent tactics and militancy in pursuit of women’s suffrage in Britain and later converted the movement into the Women’s Party, which promoted women’s equality. The year before her death, she was selected as the Conservative candidate for Whitechapel and St. Georges. She died in 1928, the same year as the passage of the Representation of the People Act that granted women equal voting rights to men in Britain.

One of the first members of the WSPU to engage in disruptive tactics to champion the women’s suffrage cause, Emmeline Pankhurst’s daughter was also among the first two suffragettes to be arrested and imprisoned. She was arrested several times and eventually escaped to Paris to avoid succumbing to the Cat and Mouse Act.

Perhaps the mother of the suffragette movement, Fawcett founded the NUWSS, a non-violent precursor to the WSPU. She also served as its leader for several decades and was instrumental in the eventual passage of the Representation of the People Act. Later, she participated in the founding of Newnham College, Cambridge, and supported and promoted social and causes throughout her life.

A member of the WSPU, Davison went on seven hunger strikes and was force-fed 49 times. She served as an officer in the organization and a chief steward during marches and was one a proponent of militant action and violence during protests. She became the first “martyr” of the suffragette cause when she threw herself in the path of King George V’s horse, Anmer, at the Derby in 1913. The causes of her actions are unclear; it is unknown whether Davison was planning on dying for the women’s suffrage movement or had another motive.

Drummond was an organizer for the WSPU, known for wearing military-style uniforms to marches, which earned her the nickname “The General.” She was imprisoned nine times for her activities as part of the WSPU, which included spearheading marches and other demonstrations.

The goddaughter of Queen Victoria, Singh was a notable South Asian suffragette, known for serving as a leader in the Women’s Tax Resistance. She was also a member of the WSPU and championed suffrage rights in many colonies as well as Britain.

Born Katherina Maria Schäfer, Marion immigrated from Germany to London at the age of 15. A singer, she was an advocate for the rights of female performers. She became a vocal member of the WSPU and was frequently arrested and force-fed through hunger strikes. When World War I began, she emigrated to the United States and became an advocate of birth control, joining Margaret Sanger’s Birth Control Review. She was also arrested in the U.S. for her participation in the movement.

Who Is the Most Famous Suffragette?

As the “mothers” of the suffragette movement, Emmeline Pankhurst and Millicent Fawcett are perhaps the best-known suffragettes in the British women’s voting rights movement. Still, the movement spawned many notable figures, including many of the women described above.

Both Pankhurst and Fawcett have been represented in books, films, art, and other works about the suffragette movement. For example, Pankhurst was portrayed by Meryl Streep in the 2015 film, Suffragette.

What Is the Difference Between a Suffragist and a Suffragette?

Traditionally, the term suffragist was applied to all advocates of women’s right to vote. It could be used to describe both men and women who supported the cause.

Around 1906, Daily Mail journalist Charles Hands, who was reporting on the movement, coined the term “suffragette” as a derogatory label for members of the WSPU, replacing the suffix -ist with -ette, denoting something small or of lesser value. The suffix was often used in previously men’s professions that were being performed by women.

While the term was meant to mock the WSPU members, the group adopted the term. Today, suffragette is applied to female suffragists, especially those who were part of the WSPU.

When Did the Suffragette Movement Begin and End?

Suffragettes have had a place in popular culture, making appearances in books, movies, songs, and more. The below works contain characters who were suffragettes or references to the women’s suffrage movement, often featuring suffragettes as prominent foci.

(Note: This list is by no means comprehensive and excludes strict documentaries or nonfiction works chronicling the suffrage movement. It includes works about both the British and American women’s suffrage movements.)

• A Bloodsmor Romance (The Gothic Saga #2) by Joyce Carol Oates

• The Secret History of Wonder Woman by Jill Lepore

• Votes for Women by Elizabeth Robbins

• Vindication! A Postcard History of the Women’s Movement by Ian McDonald