A new study released Wednesday (June 7) confirmed what we already know to be too true — that when it comes to progress for Black women, hard work alone isn’t paying off.

According to research conducted by the Institute for Women’s Policy Research and funded by the National Domestic Workers Alliance, the correlation between the amount of work Black women do and the return they actually get for their efforts is far more negligible than it is for their white peers. And that’s across all areas of life, not just in career advancement (though this is certainly part of the equation, too).

So, how exactly does this inequality manifest? In a lot of ways. For instance, Black women voted at higher rates than any other demographic in the last two presidential elections. Yet, despite their voting efforts, they remain substantially underrepresented in politics at both the state and national level relative to their 6.4 percent share of the population; in Congress, for instance, Black women hold only 3.4 percent of elected positions. And when it comes to education, the number of Black women with college degrees has grown by nearly a quarter since the early 2000s — but, on average, they graduate with more debt and fewer or less quality job prospects than white students.

The disparity between effort and return on investment becomes particularly bleak when examining the study’s findings on Black women and the workforce. Over 62 percent of Black women work; alongside multiracial women, that’s more than any other demographic of women. Yet, at 62 cents to every dollar a white man makes, the gender pay gap is significantly worse for them than it is for white women, and their median annual full-time earnings of $34,000 fall behind most other groups’. The study also found that Black women are disproportionately represented in jobs with little security, benefits, and opportunity for advancement, contributing to the fact more than one-third are in the national bottom earnings quartile. 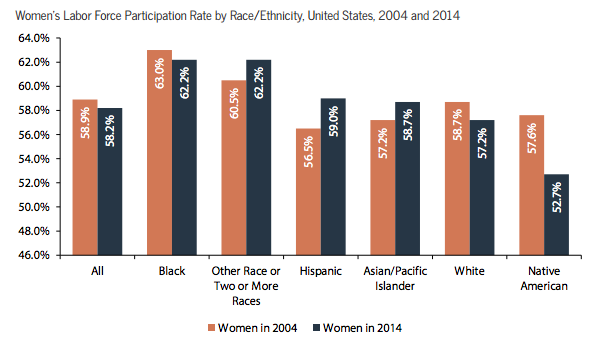 The reason for Black women’s oversaturation in low-paying jobs is manifold. For starters, they are particularly vulnerable to changes in the economy and unemployment, as highlighted in the study. During the Great Recession and ensuing recovery period, Black women lost more jobs than Black men and also lost a disproportionate number of jobs compared to all other groups of women combined. The report also found that in 2015, the unemployment rate for Black workers over the age of 25 was nearly double the rate of White workers in the same age group. The real kicker? Those rates persisted regardless of education level. Also contributing to Black women’s earnings gap is the fact they are traditionally overrepresented in the service sector, a fact Black Lives Matter Co-Founder Alicia Garza expounded upon in no uncertain terms in the study’s preface.

“Domestic labor is rooted in the legacy of slavery… Without Black women’s labor inside of white households, white women would not have been able to break (some) of the barriers of sexism that relegated the value of women’s contributions to the sphere of the home,” Garza wrote. “The result is a racialized economy where Black women are losing ground.”

By publishing the report, Garza — who also serves as Special Projects Director of the National Domestic Workers Alliance — said she hopes to help “make visible the experiences of Black women in our economy and democracy.”

Included in the report are key recommendations for how we can amp up the enfranchisement of Black women workers going forward — and several of the proposals are directly in line with the kind of change Fairygodboss advocates for. Here are a few things America must do to establish greater economic equality for Black women:

1. Employers must be more transparent.

“Widespread racial discrimination in the labor market drives persistent disparities in unemployment among Black workers, regardless of their education level,” the study says. “To remedy race and gender disparities in employment as well as earnings, employers should be held accountable for their obligation to monitor their hiring, compensation, and promotion practices. They should be required by federal, state, and local policies to increase transparency about pay and promotion decisions and to allow workers to share pay information without retaliation.”

2. The minimum wage must be raised.

The study says: “Raising the minimum wage can improve Black women’s earnings, reduce poverty, and reduce gender and racial earnings inequality. States and the federal government should raise the minimum wage and eliminate the subminimum wage to lift the earnings of Black women, who are disproportionately represented in jobs that pay at or below minimum wage.”

3. Creating policies that support work-life balance has to be a priority.

“Many Black women have caregiving responsibilities, for an elderly parent, a person with a disability, or a young child, which they must balance with work obligations,” the study says. “States can help Black women stay in their jobs and advance in their careers by enacting policies such as paid family and medical leave and paid sick days, which can help workers balance their family care responsibilities with the demands of their jobs.”