Hard Work Alone Won't Get You Promoted — But This Will | Fairygodboss
Mystery Woman
Tell us more for better jobs, advice
and connections

© 2021 Fairygodboss. All rights reserved.
Editorial
Hard Work Alone Won't Get You Promoted — But This Will
AdobeStock/Drobot Dean
Georgene Huang

Running Fairygodboss, I hear a lot of opinions about what women should do in order to be successful. Most of it is amazingly helpful and thoughtful. But sometimes, I hear things that are well-intentioned but worrisome (and potentially misleading) in their simplicity. The one piece of well-meaning advice that bothers me the most? “Just work hard.”

I hear this advice everywhere from panels on leadership to articles about how to advance your career. Yahoo CEO Marissa Mayer recently gave an interview in which she said, “My husband [the venture capital investor Zachary Bogue] runs a co-working office in San Francisco. He runs his company out of there and other startups cycle through. And if you go in on a Saturday afternoon, I can tell you which startups will succeed, without even knowing what they do. Being there on the weekend is a huge indicator of success, mostly because these companies just don’t happen. They happen because of really hard work.”

Commitment and dedication are important to achieving goals and working hard is obviously a key success factor for many professionals. The problem is focusing exclusively on hard work — because while research shows that hard work is correlated with success, the jury’s out on whether it’s sufficient.

For example, there’s an overwhelming amount of evidence that others’ assumptions and unconscious bias affect us in the workplace. And so does gender inequality: Fairygodboss recently surveyed over 1,600 working women who reported that, where gender inequality exists at work, unequal promotions between men and women is the top issue. 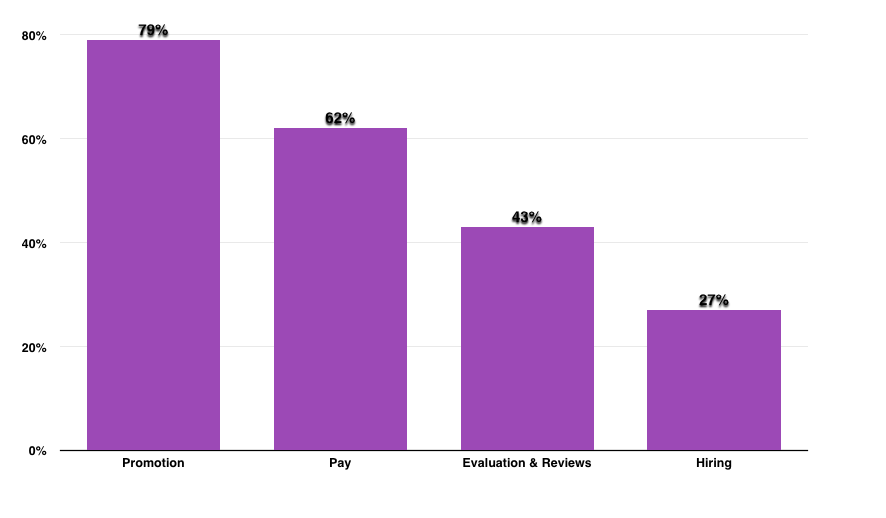 So if hard work isn't the answer, what is?

Women are good at working hard. If that was really the answer, full stop, wouldn’t there be more women in leadership, making equal pay? Working hard for your success means more than putting your head down and putting in a great deal of effort; it also means taking control of your brand making sure that others know you are working hard and it means asking for the rewards.

Case in point: We may be unduly influenced by swagger (also known as self-promotion — something research has shown men to do more without inhibition) and therefore under-value those who toil away earnestly but more quietly.

Indeed, one study concluded that “Of all the strategies used by women, making their achievements known—by ensuring their manager was aware of their accomplishments, seeking feedback and credit as appropriate, and asking for a promotion when they felt it was deserved—was the only one associated with compensation growth.”

Self-promotional behavior (including asking for what you want/have earned) matters. Yet research shows that women — even the most senior ones — still struggle with it. There are different theories about why there is a gender difference between men and women when when it comes to self-promotional behavior but the bottom line is this: Don’t buy into the career advice that it’s enough to work hard. Working hard is only one part of the puzzle. If you want that promotion or raise, use your swagger and ask for it!

A version of this article was originally published on Forbes.

Be the first to comment...
Personalize your jobs
Get recommendations for recent and relevant jobs.
Employer Reviews
Honeywell
3.0
Establish a supporting network, be clear on your boundaries...
Walgreens
2.9
Great WLB. Low promotion and raises. Ok benefits. Still a...
Michigan Medicine
2.8
Great benefits that are worth the hassle of the awful...
BlackRock, Inc.
3.4
Good luck but if you make it think about other women too...
Brown & Brown Insurance
4.5
Your experience will depend on your specific job title and...
Recent Content
3 Tools to Make Your One on One Meetings More Effective
3 Productive (Not Unprofessional) Ways to Argue at Work
Challenging the Status Quo — What It’s Like to Lead in a Male-Dominated Workplace