When Alesha Walker got out of the Marine Corps in 2005, she resolved to go back to school, get a degree, and find a stable, full-time job. Despite her hard work and competence, she had trouble with the third part of her plan.

After her six-year stint in the military, she spent three years at Southern Illinois University, where she graduated with a bachelor’s degree in business management and a minor in accounting.

“I assumed after getting a degree, I would be able to enter the workforce,” Walker said. Since she wasn’t getting hired for full-time roles, she ended up working part-time for two years before moving to Houston to work in retail.

In Houston, she was able to connect not only with a community of other veterans, but also with her current employer, Dress for Success Houston, where she now serves as the Veteran Outreach Manager.

“When I got to Houston, I was in a position where I needed help,” Walker recalled. Dress for Success — a nonprofit that’s best known for providing professional attire to women for job interviews — had received a grant to hire a veteran, and they first brought Walker on board to oversee their First Impressions program, which helps women prep for job interviews.

The president of the organization had a passion for helping vets, so Walker, a vet herself, was the perfect candidate to help implement and oversee a Dress for Success Veterans Program. Today, she’s tasked with reaching out to the female veteran population in Houston, familiarizing them with Dress for Success, and encouraging them to participate in the company’s programs, which include ongoing career development assistance, financial literacy programs, and health and wellness programs. 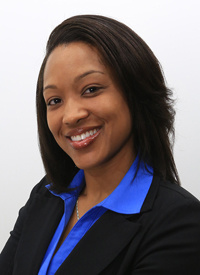 Over the past three years, Walker and her team have served over 1,000 female veterans — and the program is continually growing and evolving. Walker attributes part of this growth to her ability to personally relate to the women she’s serving.

“I have my own personal experiences to share, and I can tell them, ‘I totally get where you’re coming from; I get your journey,’” she said.“A lot of times vets come home and struggle with re-identifying themselves and trying to find a job and still take care of their families. At Dress for Success Houston, we’ve done a great job of connecting them with resources in the community.”

Walker also believes that partnering with employers has been crucial to the program’s growth. After successfully hosting a resource fair that connected vets with numerous veterans services organizations, Dress for Success went on to organize a career fair in 2015, where representatives from 16 companies convened to connect with female veterans, helping them with resume review, interview prep, and other professional development skills.

Hewlett Packard Enterprise (HPE) is among the companies that’s been partnering with the Dress for Success Veterans Program since its inception, and Walker described why that collaboration has been so fruitful. Susan Graye, Talent Acquisition Manager, Veteran and Diversity Programs at HPE, has served as a key champion and liaison between HPE and Dress for Success.

“Susan Graye has been coming to the career fair from the beginning,” Walker explained. “She’s great; I send her resumes, and she’s able to get them to the right people. We help bridge the gap [between veteran job applicants and employers looking to hire veterans.]”

In addition to career fairs, The Dress for Success Veterans Program now hosts numerous events, including a “lunch and learn” series that invites vets to come learn about the program, as well as conversations with life coaches who offer advice on how vets can maximize their military skills in the civilian sector.

Perhaps the best part of the program, though, is its culture of paying it forward. Walker explained that one vet she worked with landed an administrative job but was soon promoted into a talent acquisition role — and is now responsible for recruiting veterans to work at her company. Walker worked with another vet who was ready to give up on her job search before working with Dress for Success.

“She was in tears” when she came to a Dress for Success career fair, Walker recalled, “because she had never felt so uplifted and empowered, and she finally felt she wasn’t alone in her journey.”