Mystery Woman
Tell us more for better jobs, advice
and connections
YOUR GROUPS
Discover and join groups with like-minded women who share your interests, profession, and lifestyle.
COMPANIES YOU FOLLOW
Get alerted when there are new employee reviews.
YOUR JOB ALERTS
Get notified when new jobs are posted.
Level Up Looks

There’s a scene toward the end of “Nine to Five” in which the chairman of the board whispers that, out of all the progressive, productivity-enhancing policies Jane Fonda, Lily Tomlin, and Dolly Parton’s characters have implemented in their boss’ (involuntary) stead, equal pay has got to go. Flexible hours is one thing, but equal pay? It’s “too much,” he says.

Nearly 40 years later, and this unfortunate attitude toward equal pay isn’t the only moment from the film that still smacks of relevancy. Sartorially, the power suit looks of the 1980s and 1990s are back to being a wardrobe staple, in and out of the office. 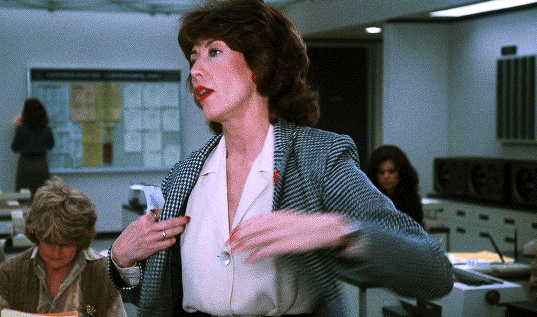 The look has received at least some updating since the shoulder pads of decades past. But for many women and gender-nonconforming people — namely, the people suits weren’t originally designed for — the subversive connotation of donning a power suit remains. Before diving into the ways these suits are being used and styled today, let’s take a look at their roots, which extend well beyond Lily Tomlin’s turn in "Nine to Five."

A Quick History of Power Suits

In Paris, gender-bending actress Sarah Bernhardt causes a scandal by wearing a trouser-suit. 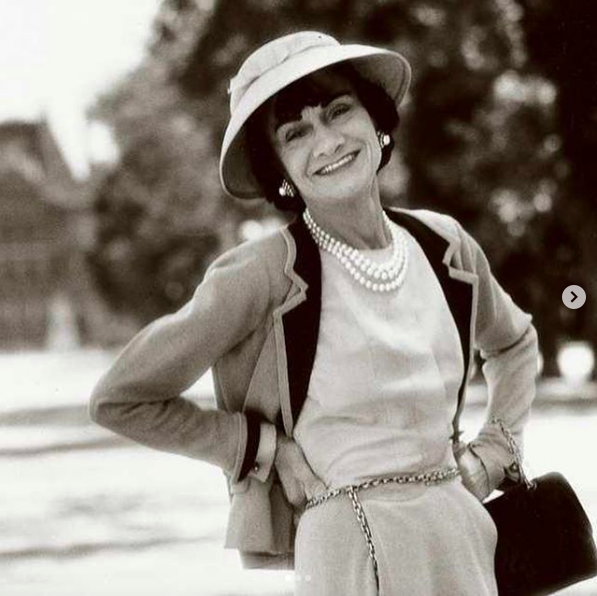 Coco Chanel designs her first suit for women. It features an ankle-length skirt, though Chanel herself was famous for sporting pant variations.

Vogue features a woman in pants in its pages for the first time, thanks in no small part to the rising star of actress Katherine Hepburn and her affinity for smart pant-and-jacket sets. 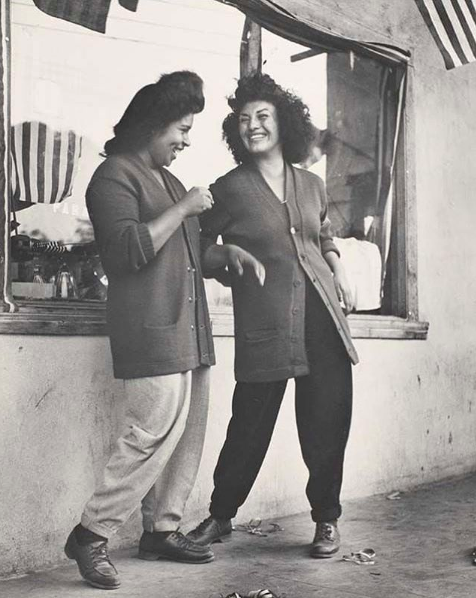 Pachucas, female members of the Mexican-American pachuco subculture, begin wearing “zoot suits” as a symbol of rebellion and rejection of conventional femininity. Meanwhile, as part of the American war effort, many women are entering the workforce for the first time, contributing labor that requires utilitarian pantsuits a la Rosie the Riveter.

Polished suits, specifically of the skirt variety, are sported by leading ladies on and off-screen, from the stars of Alfred Hitchcock films to First Lady Jackie Kennedy. 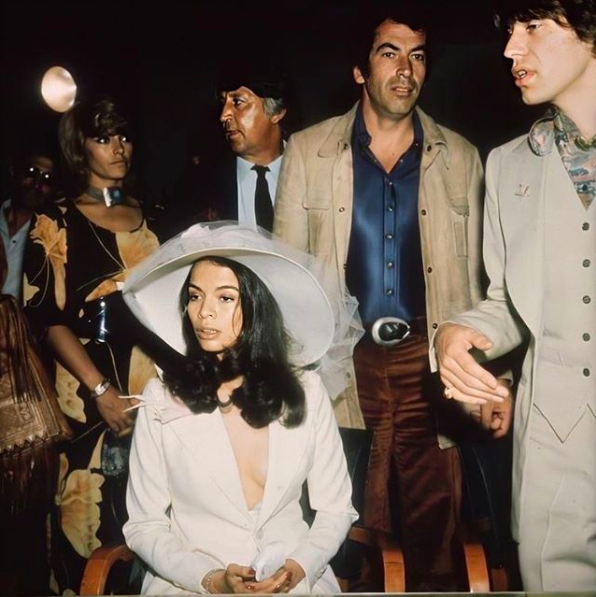 Featuring stiff shoulder pads and bright colors, the power suit as people tend to think of it makes its first appearance, most often in association with white-collar, corporate women. 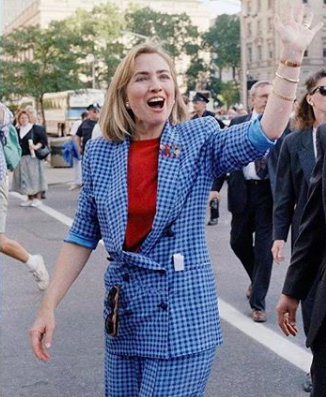 Maryland Senator Barb Mikulski becomes the first woman to wear a pantsuit on the U.S. Senate floor, followed shortly thereafter by Hillary Clinton. Clinton's penchant for power suits later featured prominently in her campaigns for the presidency, taking us into the modern era of power dressing.

What color is a power suit?

A power suit can, of course, be any color you’d like it to be. For a recent experiment for Fairygodboss in which I wore a power suit to work every day for a week, my favorite suit was an emerald green number. What matters most is that the shade you opt feels natural and helps enhance your confidence. Below, we've rounded up a few options. 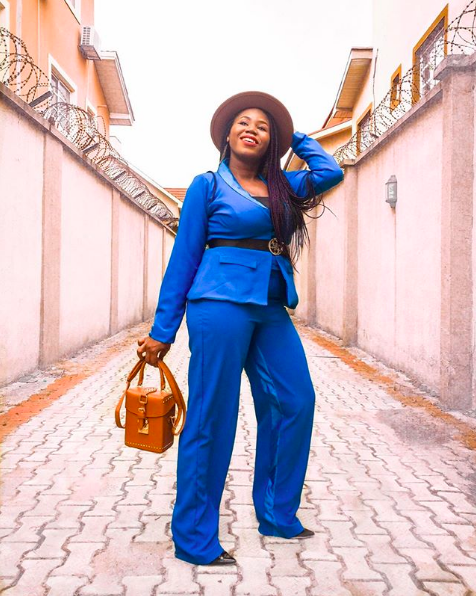 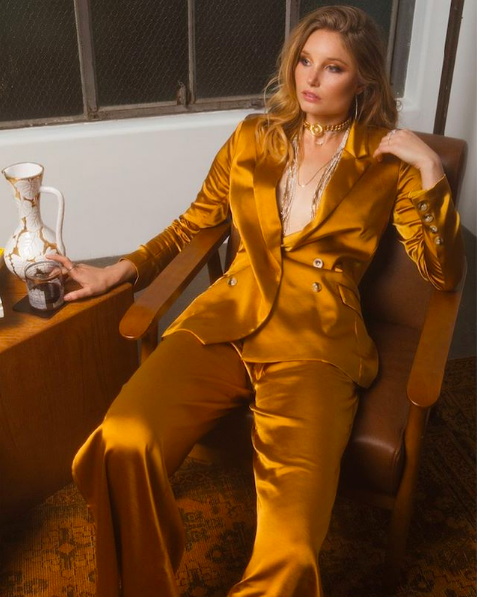 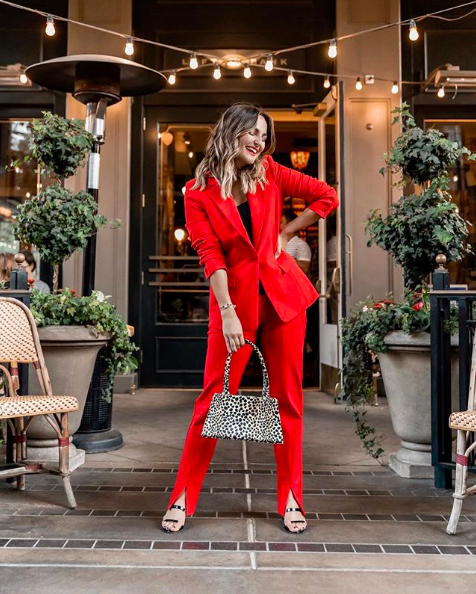 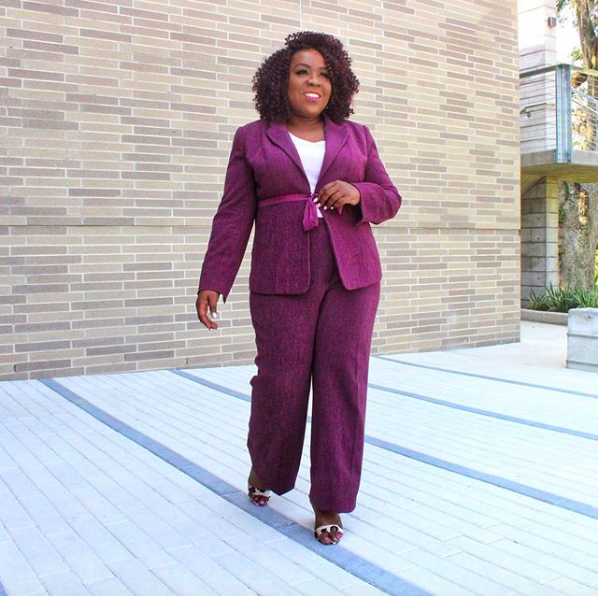 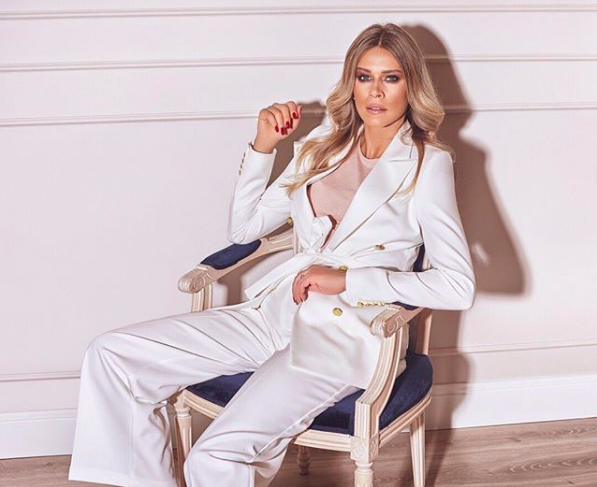 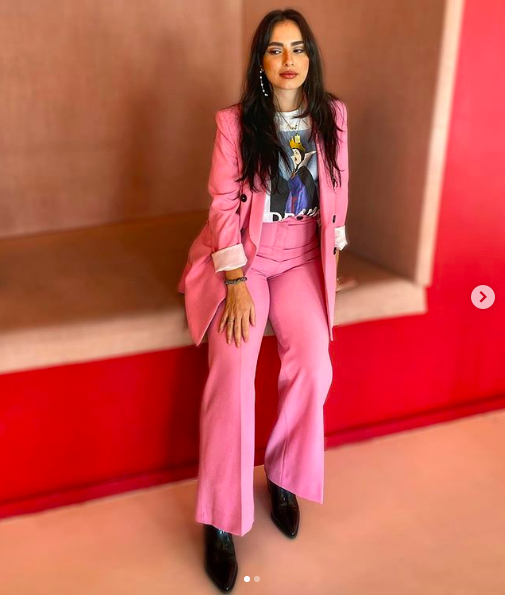 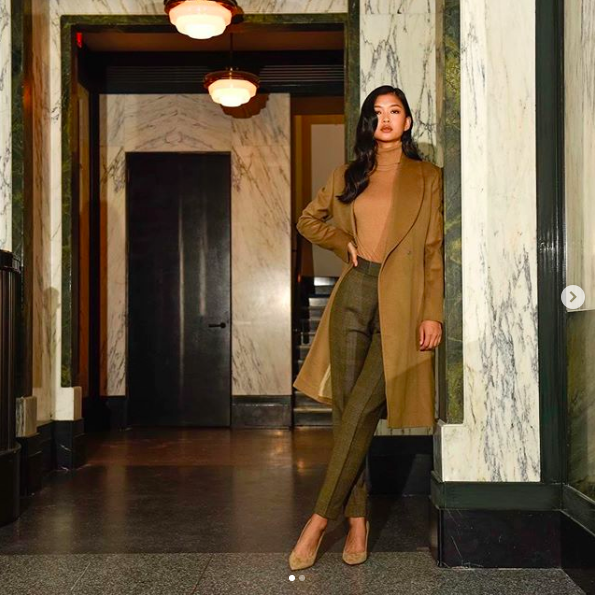 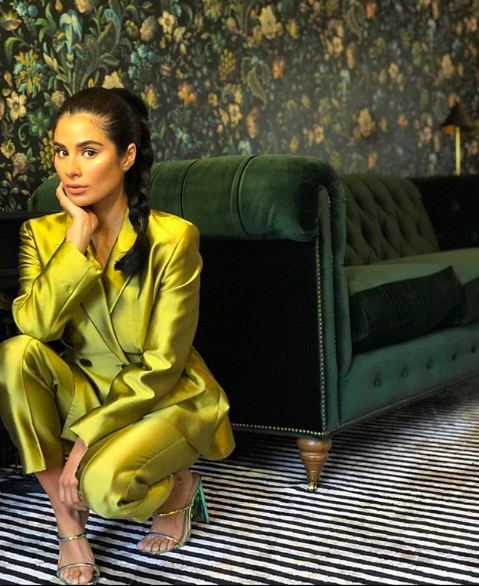 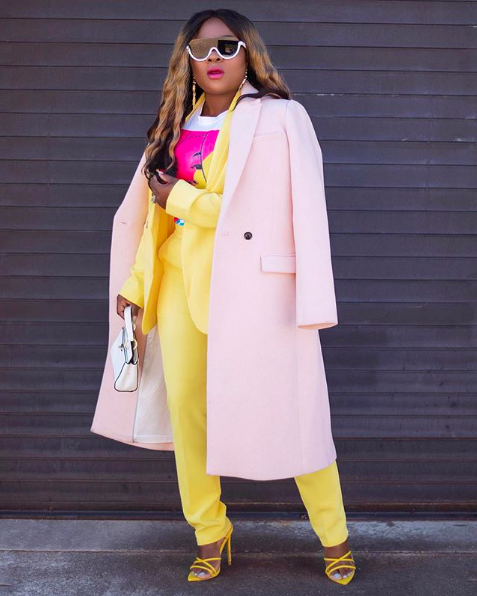 What does wearing a suit represent?

Traditionally, suits represent self-possession and power — of the financial variety, yes, but also psychological. Women and femme-identifying people have long co-opted and redefined elements of masculine dress in an effort to subvert gender norms and make a bid for smoother passage through traditionally male-dominated spaces. And in the case of the power suit, the spillover effects of sporting one have proven scientific merit.

Consider “enclothed cognition,” the theory arrived at by researchers Hajo Adam and Adam Galinsky. In their 2012 study published in the Journal of Experimental Social Psychology, the pair examined what happened when a group of undergraduate students were given white coats. Certain subjects were told it was a doctor’s lab coat while others were told it was a painter’s coat. While wearing the coats, the students were then tested — and the ones who'd been told they were wearing a “doctor’s coat” focused better and cognitively outperformed the “artist” group.

Such can also be said of the symbolic and physical experience of wearing a power suit to work.

Why is power dressing important?

As outlined above, wearing a power suit comes with some very real psychological spillover effects. At the end of my own power suit experiment, I realized that being so intentionally put together in appearance throughout the work week resulted in me feeling a little more put together in my life overall. The way we dress ultimately serves to signal to others how we see ourselves — and, more specifically, how seriously we take ourselves. Giving yourself the extra vote of self-confidence by power dressing at the office, then, can’t help but trickle down into how our worth is perceived, by ourselves and by others.

This question reminds me of one of my favorite Cher quotes, from a 1996 interview with Jane Pauley:

Why try to dress like a powerful man when you can just go out and be one? If it’s specific suit-styling tips you’re after, though, here are a few dependable ones: 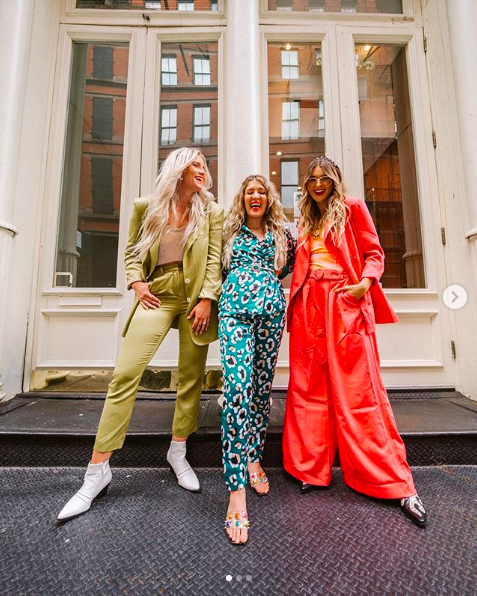 For a more updated silhouette, try opting for a pair of cropped trousers. Fits that aren’t skin-tight, like a cigarette cut, tend to look a little more polished. Or go for a flared leg for something more bold. 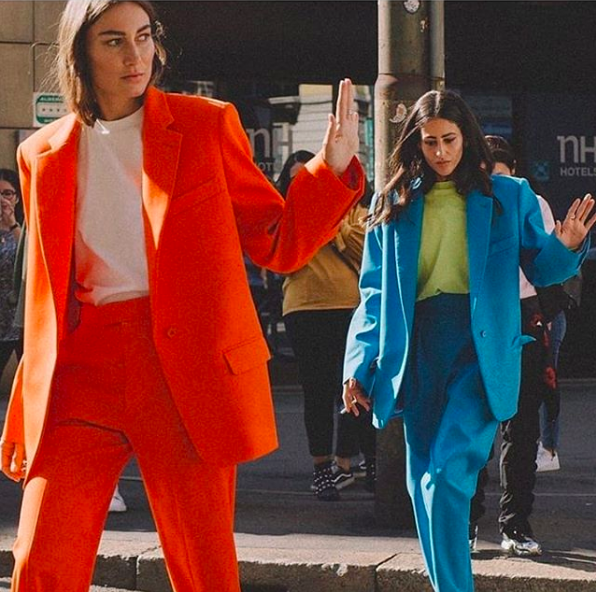 You’ll look and feel a touch more relaxed (and Katherine Hepburn would approve).

3. A brocade or paisley pattern jazzes things up. 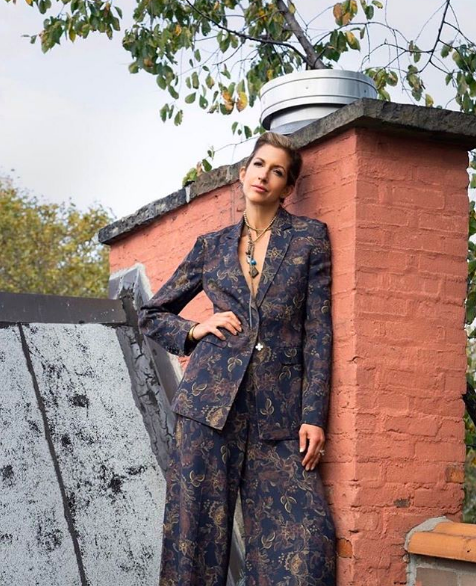 Especially one with a metallic thread.

4. Or opt for an all-over animal print. 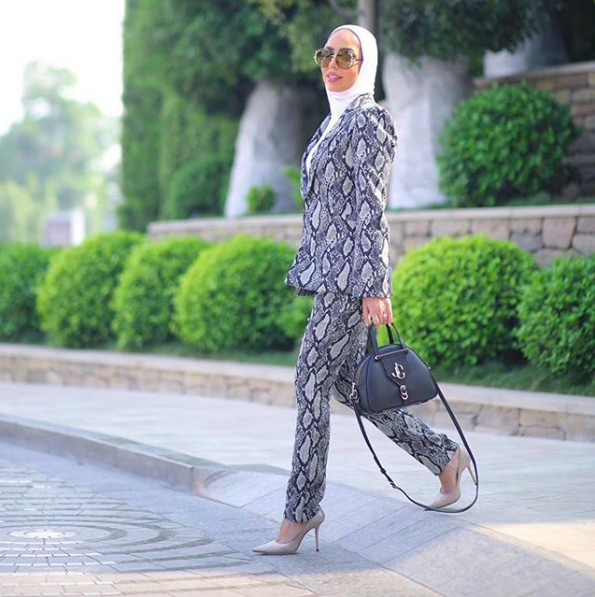 5. When in doubt, you can never go wrong with an understated grey check. 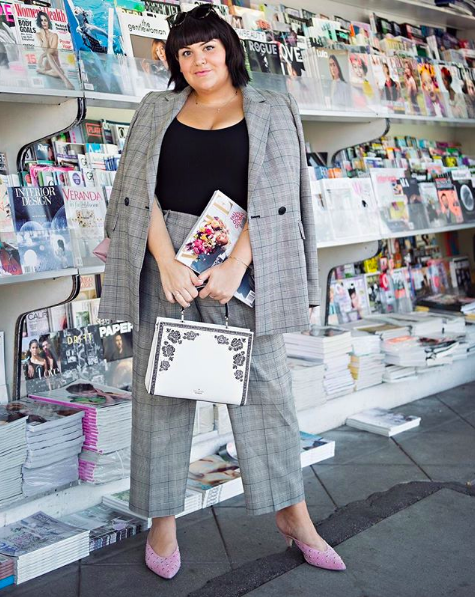 Photo via Instagram/@nicolettemason This pattern will never not be timeless. Add a pop of color with your shoes.